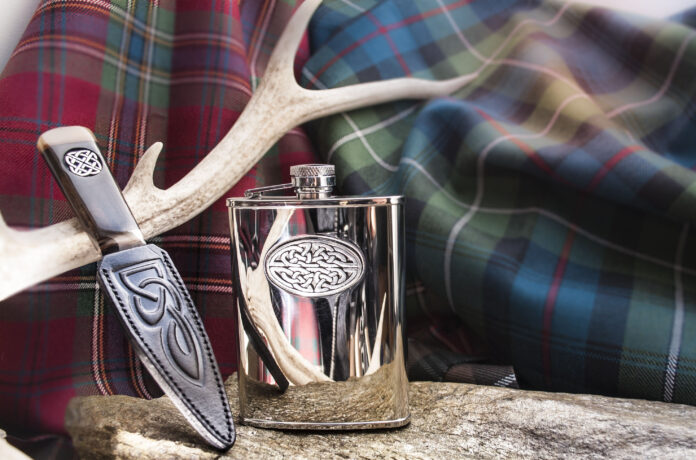 Scots Gaelic has a rich and colourful vocabulary. Many words have an anglicised form in local usage or have been transposed into Scots. Examples include ‘Gillie’ meaning somebody in charge of fishing or a hunting servant (from gille meaning a boy or servant) or capercaillie (from the Gaelic capall-coille meaning ‘horse of the woods’). These and other words such as ceilidh or Glen are common in the Highlands and Lowlands but do not have much usage outwith Scotland.

The beautiful landscape in the photo is actually in Estonia of the Kemeri National Park, but it goes to show how far this word has travelled.

The Scottish clan is a kinship group of shared identity amongst members with strong family ties or bonds to that family. Indeed, it is a common misconception that every person who bears a clan’s name is a lineal descendant of the chiefs. Many clansmen took the chief’s surname to show solidarity or to obtain protection. Others were tenants, who supplied labour to the clan leaders.

In modern English, your clan has come to mean your wider family or group of like-minded individuals.

The meaning of this word has also moved with the times. In olden Scotland ‘gu leor’ meant plenty or enough to satisfy everyone. One can imagine the tenant farmers of Aberdeenshire describing their turnip harvest as ‘gu leor’ and smiling because it would get them through the winter.

Nowadays, in the age of abundance, galore tends to mean enough and more.

The same tenants who had turnips gu leor might also have kept ducks or geese. Telling them to shut their gobs just as English travellers were passing, might have led to transference into English.

These days, gob is mostly a slang word in modern English, and usually used in relation to telling someone to shut their mouth!

It is now used across Global English and is heard in millions of homes across the world as the word ‘pet has been taken up by numerous languages via English.

The Gaelic for little rug or pack saddle is pillean, and those having to share a horse would have sat on it behind the saddle of the main rider.

In modern English, it has come to mean the second seat on a motorbike for the person ‘riding in the pillion’.

As the soldiers charged down the hillside into battle, they would have shouted out the sluagh-ghairm associated with their clan. The intent was to rattle their fighting foes and also to hep distinguish sides during a battle. ‘Buaidh no Bàs!’  (Victory or death) was the war cry of the Macneils, for the Grants it was ‘Craig Elachaidh’ (The Rock of Alarm).

These days, the word ‘slogan’ has come to mean a rallying cry for political parties or corporates. Worldwide, the word is used in many languages from le slogan in French to слоган in Russian.

Whilst US etymologists have put forward an alternate US source of the word ‘smashing as being derived from ‘smash hit’, British usage would pre-date this, and the most likely source is the Gaelic phrase ‘s math sin’ meaning that is good.

It is ironic that Scotland is known the world-over for wearing the kilt, and yet it has given the world the word ‘trousers’. In Scots, Trews (Gaelic truis) are a traditional form of tartan trousers.

Anyone who has been in a bar or an airport duty free will have seen bottles of whisky, and if they are bottles from Scotland, they might even see Gaelic names such as Glen Gairoch, Dallas Dhu or Tè Bheag staring back at them.