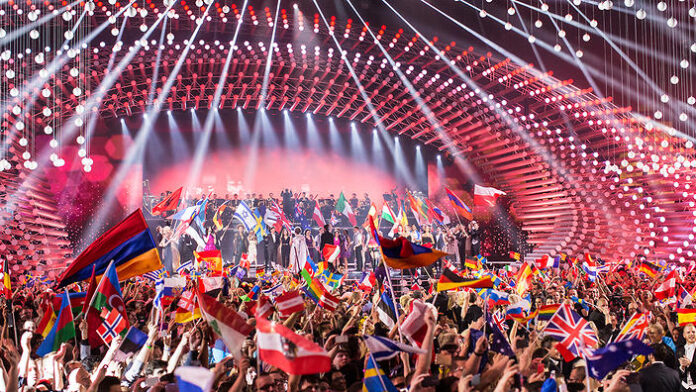 Eurovision may have been put on hold this year, but that does not us stop us from celebrating the 64 previous contests! The most famous musical contest on Earth has an army of fans who can regale you with thousands of facts about the show’s many past colourful performances and amazing venues. Here are our top ten Eurovision facts.

#1 Eurovision is the #1 biggest Music Show in the World

The Eurovision Song Contest (French: Concours Eurovision de la chanson),  often simply called Eurovision, is the longest-running annual international TV song competition. It is watched across five continents by hundreds of millions of viewers and is the largest music competition in the world. It has helped start the careers of the likes of Abba and Celine Dion and has a large following of dedicated fans.

#2 At the first Eurovision, each country sang two songs

In 1956, every participating country could enter with two songs. The Netherlands were the first country to sing a song on Eurovision with “De vogels van Holland” (the birds of the Netherlands).

#3 All Eurovision songs have to be 3 minutes or less

All Eurovision songs must not be longer than three minutes. Which makes sense given the number of contestants..

#4 The UK has hosted the Eurovision four times without winning

The previous year’s winner hosts Eurovision but it’s so expensive that nations have pleaded poverty to get out of it. The countries who have opted out include the Netherlands, France, Monaco, and Luxembourg and the job went to the UK four times

Groups of more than three were not allowed into Eurovision until 1971. Even now, no more than six people are allowed on stage (including backup singers and dancers).   In recent years backup singers have been allowed to be “invisible” (i.e. sing backstage, out of camera shot).