Home Over The Hump Featured – Brosnaichte 11 Years with No Weekends – Suicides, divorce and mass depression –... 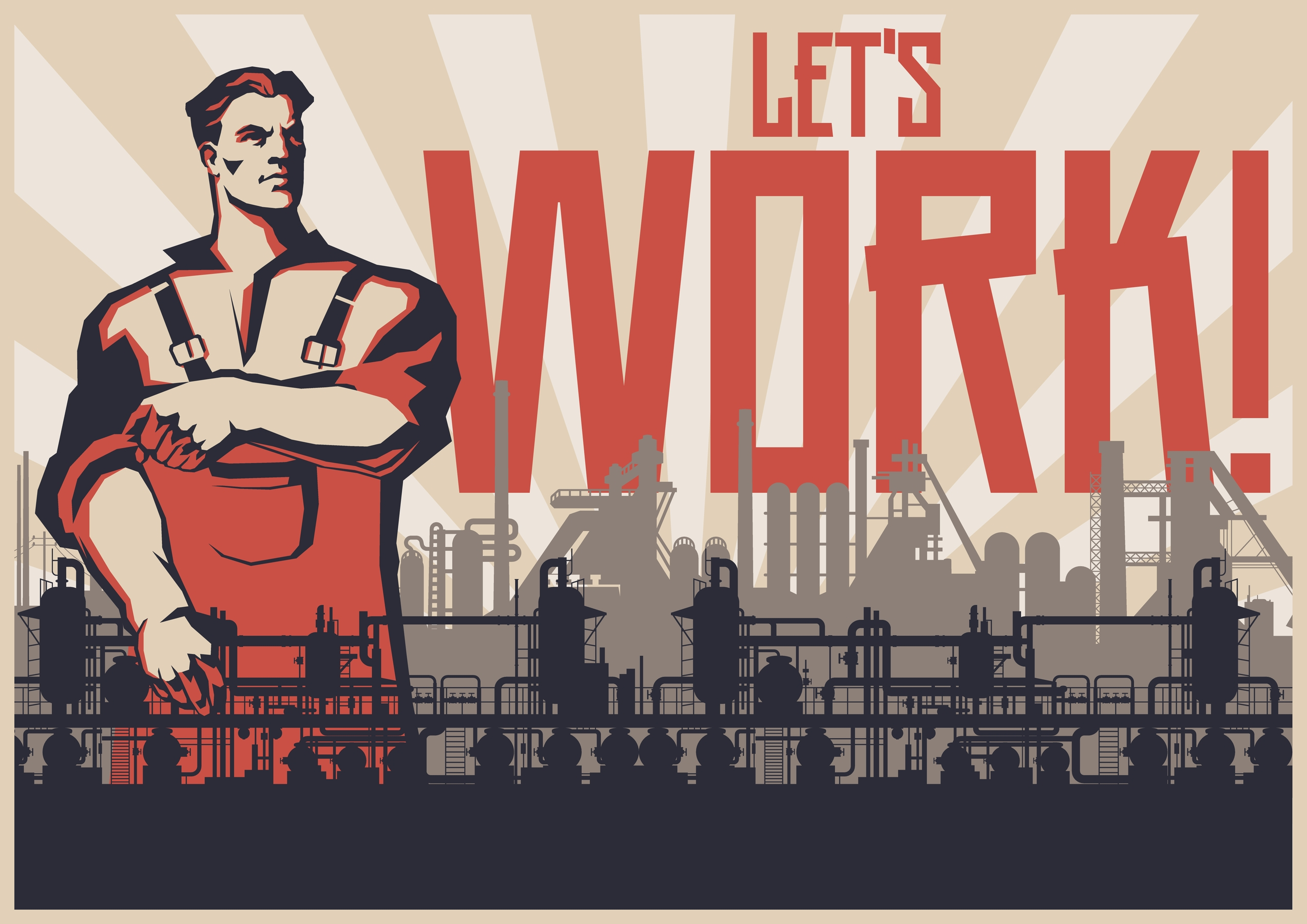 For 11 long years, weekends did not exist in the Soviet Union. Like today’s dystopian novels, manufacturing ran, machines processed, and labour continued non-stop in order to create an industrial powerhouse. But what was the secret design behind this idea?

29th September 1929. For many of the Soviet Union’s working class, it would be the last day they would spend together as a family for the next 11 years. From that moment on, the Soviet Work Week would be transformed into continuous five or six-day working weeks.

The Stalinist Era. Josef Stalin and his political allies ruled the country with an iron grip. After succeeding Lenin, and ousting Trotsky from the country, Stalin set about with the fervour of a visionary consumed by his goals.

His goal – to industrialise the Soviet Union, and revolutionise a heavily peasant-based society, into an economic powerhouse. His brutal and myriad five-year plans would go on to change the course of history. Yet one of his less successful attempts included a revolutionised work week.

For the working class, life was hard, yet simple. They would work their fingers to the bone for six days, and spend the seventh with their family. This day of rest, would be spent organising the home, spending time with family, gathering with friends, going to church and coming together in groups.

Yet while this day of rest occurred, machines stopped running.

Across the length and breadth of the country, industry was paused. An entire 24 hours of powered down production lines, of quiet, echoing workshops, and industrial districts devoid of chatter.

For a man who envisioned an industrial future for the country, Stalin thought it a waste – Why shut down production?! Why reduce results?! He then found a solution.

Yuri Larin, a Soviet economist, proposed the ‘nepreryvka’ – The revolutionary continuous-working week. While initially shot down and ignored in May 1929, word gradually reached Josef Stalin. Then a month later, Stalin voiced his vast approval for the subject.

Of course, once Stalin approved of something, so did every newspaper in the country. Or at least every one that wanted to stay up and running.

Directing efficiency experts to begin planning, the continuous work week was up and running from the 30th of September 1929. 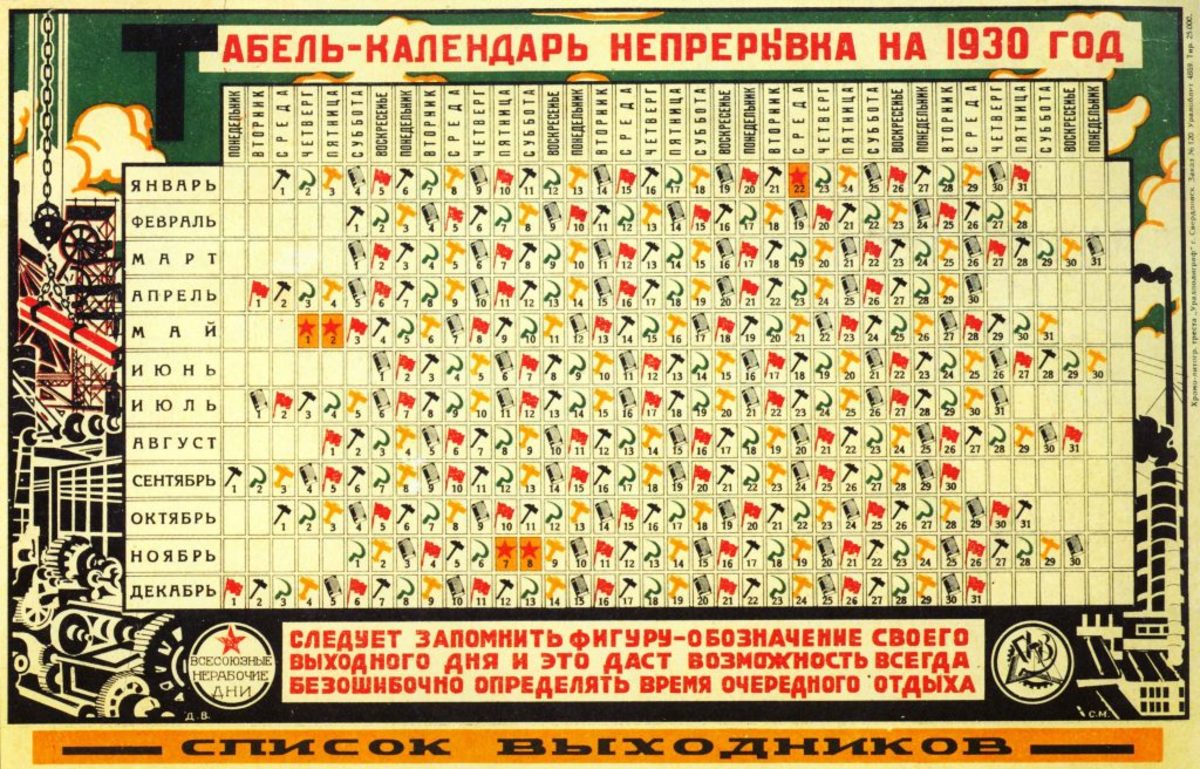 Gone was the seven-day working week, in its place – the nepreryvka. A calendar of working weeks, with only five days in every week, represented on a calendar by a wheatsheaf, a red star, a hammer and sickle, a book, and a woollen working-cap.

Days off were included, just not the way we know them.

The point of this week was not to increase time off for people, but rather, to spread time off among the working class, so that production was never-ending. To create a country that would bring forth the fruits of labour without any significant pause in production. So, every five days, a worker’s day off was randomly assigned.

In theory, this intriguing plan should have allowed the working class to retain days off, yet keep production continuously moving. A way to make everybody win.

But, like dating ads in the newspaper, everything looks better on paper.

What’s the point of a free day, if you can’t spend it with loved ones? This was the tragedy that many suddenly faced. They would have the first day off, their wife – the second day. Perhaps a brother would have the third day off, and a best friend the fourth. Days off were no longer about family and friends, but spent by themselves, unless fortune favoured you and you were selected to have free days together.

It is a valid point that perhaps this was Stalin’s goal. After all, the Russian Revolution which  culminated in October 1917 swept the Bolsheviks into power on the shoulders of the masses. Powerful working class belief and social ties were part of the inspiration needed to overthrow the old Tsar. A dictator like Stalin feared another movement may be able to do the same to him. To reduce ties and contact among the working class, this would prevent gatherings, organising, and revolution.

While the main cause for the nepreryvka was economic, Stalin possessed yet another motive behind it. As an avid reader of Karl Marx, and an Atheist, he viewed religion with disdain.

How better to resist it than to throw away organised weekly patterns for the working class? Reinventing the work week, and spreading out free days would prevent people of all religions from gathering in their churches, mosques, and temples.

Nepreryvka turned out to be both an economic plan, a way to maintain power, and a war on religion. 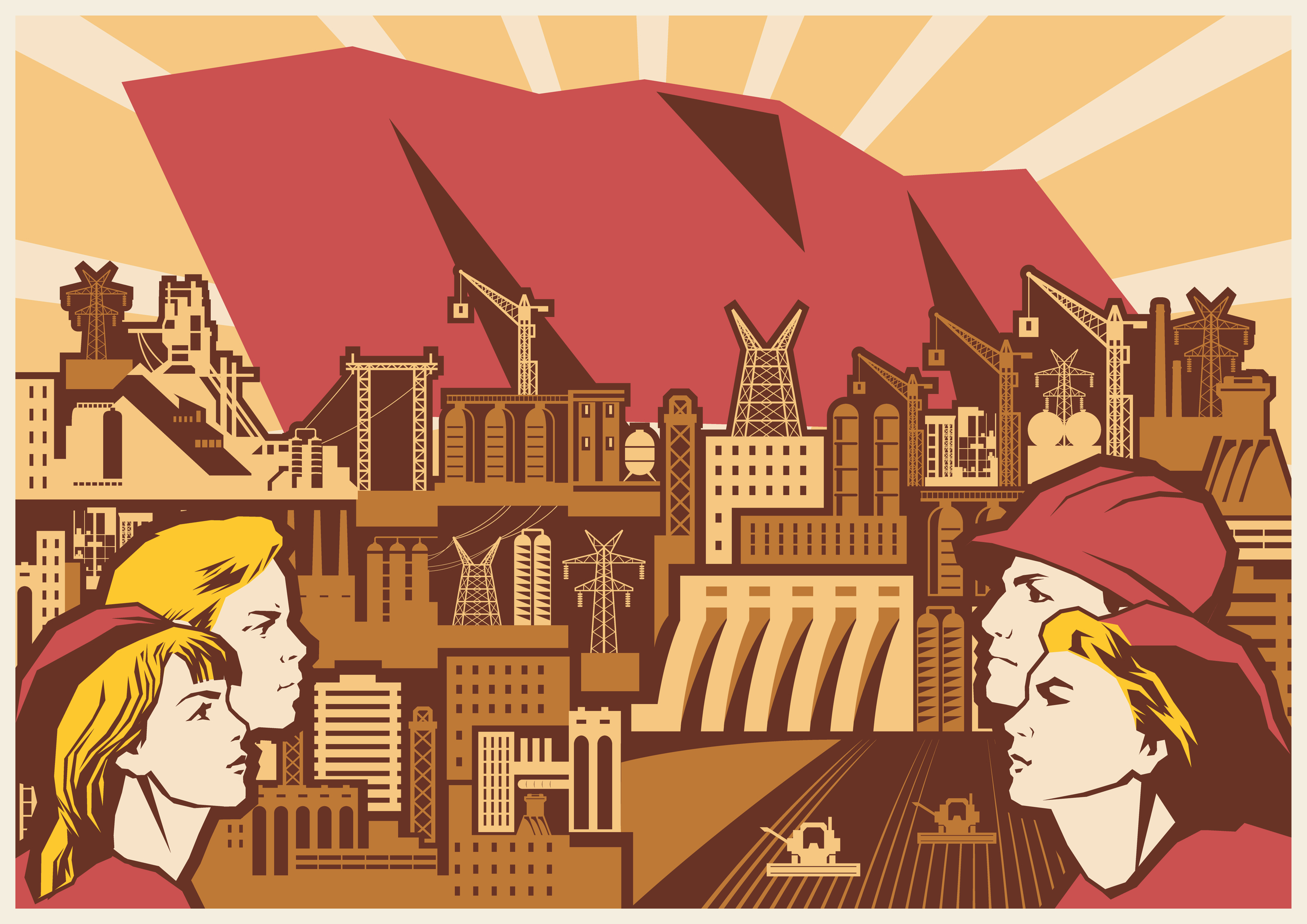 The outrage began as a sea of dissent among the population. The official newspaper of the Communist Party, Pravda, began publishing letters sent in.

‘What is there for us to do at home if our wives are in the factory, our children at school and nobody can visit us? It is no holiday if you have to have it alone.’

This angry letter was a personal tale of one man, but the story of an entire class.

Ivan Ivanovich Shitz was a historian, and railed against the nepreryvka in his writings. He was angry against the continuous working week, and stated how it would prevent families and friends gathering, whether in social environments, or political gatherings. He also stated that it had killed off Sundays, and would eventually lead to the abolition of all Christian holidays.

These views were not from the benefit of hindsight, but from the mouths of those who suffered it.

It was inevitable. The difficulties, the outrage, and the resentment began to force a five-day working week into a six-day working week. Different industries soon had unequal working weeks. The government bowed to more pressure and allowed coordinated days off for familial groups. What began as a concrete, authoritarian system, gradually slid into anarchy year after year.

Concessions were made among different areas, different groups, and different industries, until eventually the nepreryvka met its demise. On June 26th 1940, a decree from the Presidium of the Supreme Soviet, the seven-day work week to be officially back in use.

While workers once again had Sunday off, there would be other difficulties they would endure. Criminal offences and mandatory prison sentences would be enforced for the slightest infraction.

The nepreryvka was gone,  but a Dictator still remained.