Home Compass Cat Cafés – Kitty Heaven or Cause for Concern? 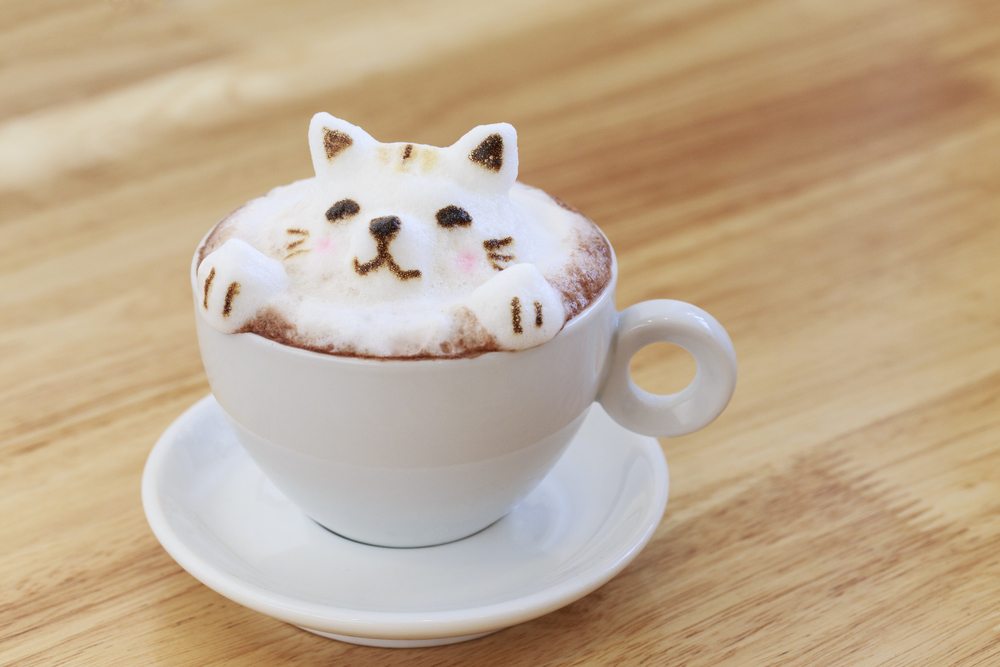 The popularity of cat cafés continues to grow worldwide, particularly in large cities where city-dwellers might not necessarily have space to keep a pet Whilst some cafés have good intents and are also run as adoption centres, others have caught the attention of animal welfare charities.

Using Google and entering any number of different ‘feline’ phrases, it is not difficult to reach the conclusion that there are probably in excess of 200 so-called cat cafés around the world.

From New York to New Delhi; from Leeds in Yorkshire to Barnsley in Australia, there are hundreds of cafés where you can enjoy a ‘purrrr….fect’ cosy coffee with a cute little cat or kitten, possibly cuddling up to your side or choosing to doze on your lap. 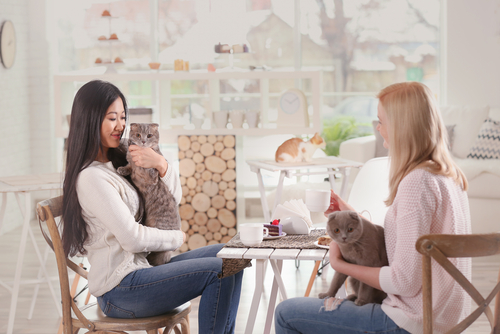 As new cat cafés continue to throw open their doors for the first time to prospective coffee, cake and crumpet lovers from Iceland to Italy and Brazil to Bali, one of the latest examples of this feline phenomena is the Cattyshack Café in Gulf Coast, Fort Myers, Florida.

However, this cat/golf themed café will have to compete with at least 5 others already established in the state.

Like many of its kind, the Cattyshack does not simply aim to provide delicious food and beverages for humans; it wants to help find homes for hitherto stray and abandoned cats by giving them an opportunity to meet with humans who may be looking to connect with a new feline friend for life.

Indeed, the Cattyshack website reveals that one of the reasons why owners decided to open their new establishment in this particular area of Florida, USA, is that it is home to “over 250,000 feral cats”.

Its mission, it says, is to “find homes for adoptable cats that would have been otherwise overlooked at an animal shelter.”

It is thought that the cat café craze began in Taipei, Taiwan some 22 years ago but really caught the public imagination when it reached Japan in 2004. 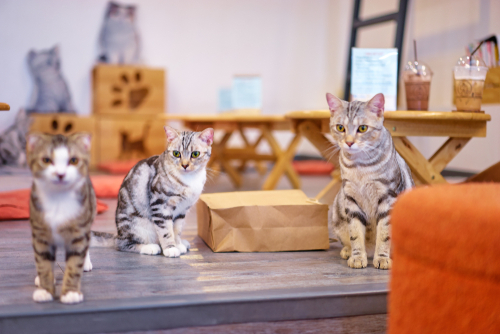 Interestingly, it is thought that the phenomenon exploded in popularity in Japan in particular, because many Japanese cities are packed with small apartments which are not suited to pet ownership.

A feline fix at a cat café, means that pet-loving residents of ‘compact’ apartments can indulge their love of animals while having a chat over a coffee or a tea with friends – both feline and human.

Indeed, the idea behind the majority of cat cafés is that cats can mingle with customers at will, yet are also are free to escape to a cat-only secondary room should they wish for some alone time.

In many establishments, customers are asked not pick-up cats and sit them on their knees or force them to spend time with humans they do not know.

Even so, some cat and animal welfare charities have their reservations.

A spokesperson for the British animal charity, the R.S.P.C.A. (Royal Society for the Prevention of Cruelty to Animals) had this to say about cat and other animal cafes:

“We completely understand that people want to interact with cats but the RSPCA has concerns about keeping cats in a café environment as they may experience stress from the enforced proximity to other cats as well as unfamiliar visitors wishing to stroke them.

“If people want to have the companionship of a cat, we would recommend they help out at their nearest rescue centre instead and meet some of the cats looking for new homes.”

The charity goes on to say that grouping cats together in one area can lead to the spread of disease and questions whether the animals’ welfare and emotional needs can be rightly met in a café environment.

The Cats’ Protection League charity has also warned that cans need a stable environment, something that, due to its ever-changing influx and outflow of customers, a café environment cannot provide.

However, cat cafés can now be found in hundreds of cities across the world and continue to be popular venues for friends and families.  Many are forced to book customers on to waiting lists, often for several weeks in advance. 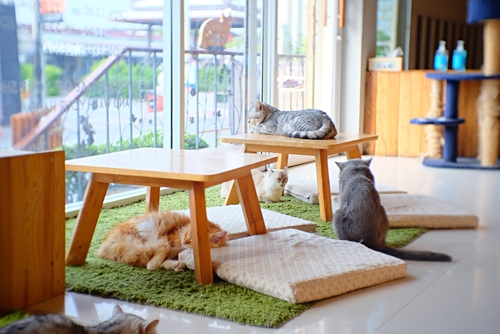 And there is no sign of their popularity waning. A simple internet search for the best cat cafes in the world offers no less than eight websites created to discuss the top five, 10 or even 20 to be found.

Of course, wherever there may be a cat lover, a dog, rabbit, hamster or even penguin lover will not be far behind.

This cat craze has spawned all kinds of ‘pet’ cafes where well-meaning tea and coffee drinkers can go to interact with a variety of creatures, some of whom may need to find forever homes and others, who are simply there to provide pleasure and distract visitors from the stresses of their daily lives.

For example, you can dine with meerkats, sheep or dogs in cafés in South Korea; rats, snakes, spiders, flying squirrels and iguanas in a pet café in Hanoi, Vietnam; and penguins in Tokyo, Japan.

The UK also boasts a wide range of cat, dog or creature cafes both in towns and the countryside where there is room to allow humans and animals to mix with plenty of space and with less stress.

It hasn’t always been good news for the worldwide pet café community, however. There have been occasions where animal and hygiene experts have been called into enforce closure or impose fines on establishments who have struggled to manage their premises and animal welfare properly. 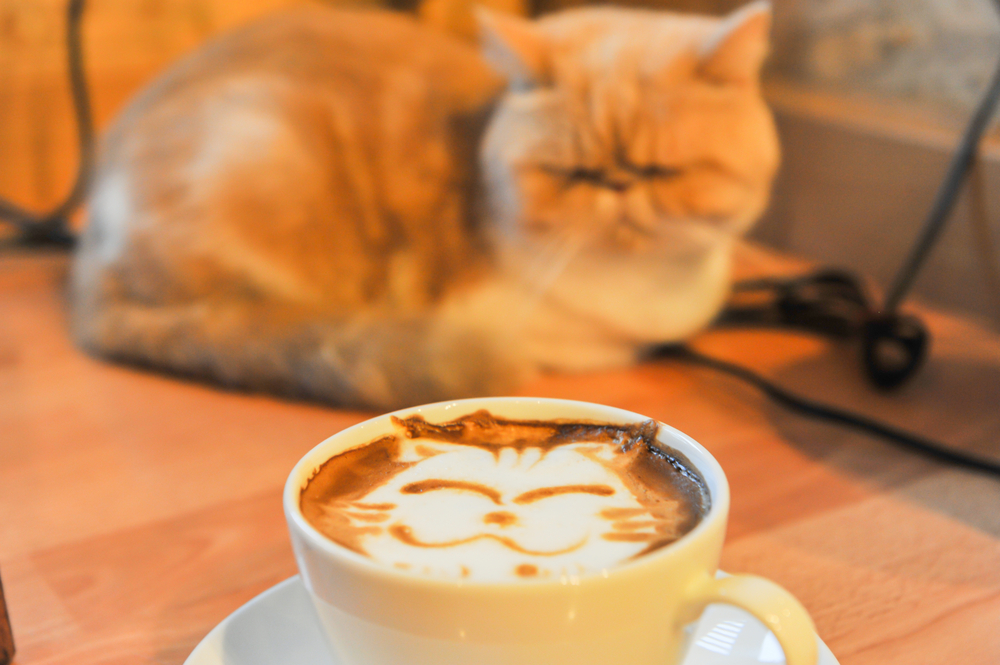 In Singapore, one café owner was jailed after seven cats died under his management while one English pet café was fined under hygiene regulations.

Concerns have also been raised about the health and hygiene risks associated with cross-contamination between animals, humans and food, especially in smaller or enclosed environments.

However, many cat and pet cafes are strict about how humans behave in their establishments, stressing that their focus is on animal welfare, both mental and physical.  A number of establishments across the globe will not allow children inside, while others strictly limit animal/human time or do not permit patrons to pick up animals.

Many pet cafes promote and educate their customers in animal welfare and charge entry fees, as well as beverage charges, to pay for the proper upkeep of their four-legged friends.

If you do have concerns about the ethics of visiting a café, perhaps look to its purpose first before you visit – is it there purely to entertain humans or help cats in need?