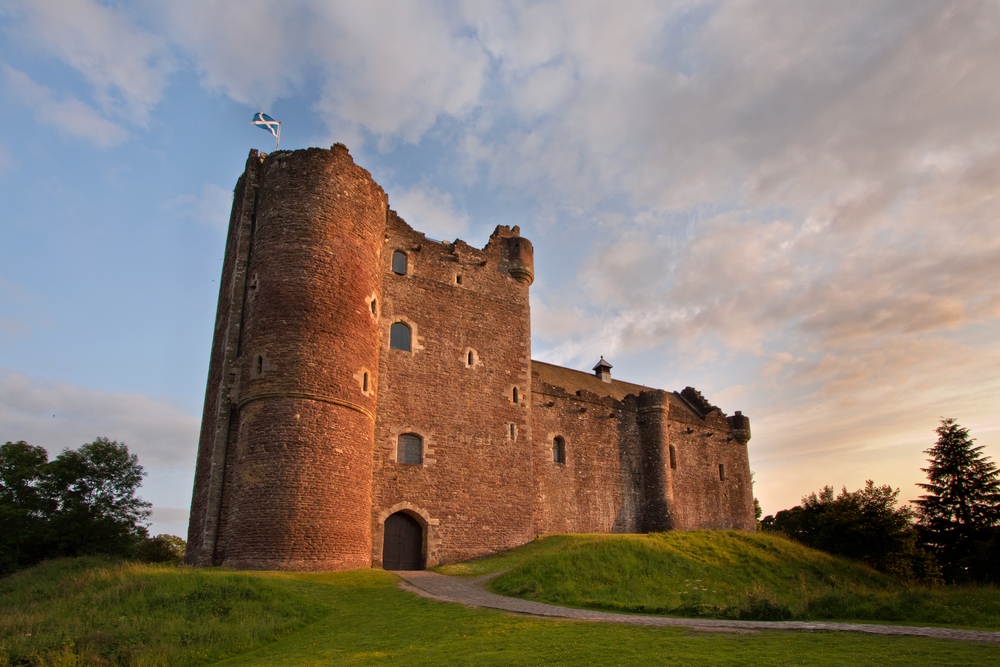 Stirlingshire’s Doune Castle is the best-preserved medieval stronghold you are likely to find in the whole of Scotland; from its formidable 12-metre high curtain wall, to its imposing main tower. So well preserved, in fact, that it has been predominantly used as a filming location in many major films and TV shows, from comedy classics like Monty Python and the Holy Grail, to recent cultural zeitgeists such as Game of Thrones. Despite its immense historical importance, and pop cultural relevance thereafter, it is relatively unknown outwith Scotland; to solve that, here is a thorough run-down of Doune Castle’s history, importance, filming locations, and accessibility.

What is its history?

The location of Doune, where the River Teith and Ardoch Burn meet, witnessed some degree of Roman activity during 1st century AD, although to what degree remains unclear;  Roman presence is suggested by the several ramparts and ditches which surround the present day Doune Castle, which may have been the positions of several Roman forts; plus the name ‘Doune’ itself derives from the Gaelic word for ‘fort’.

A ‘Doune Castle’ has most likely existed since the 13th century, however, no structure or remains from this time survives, having most likely been lost during the Scottish Wars of Independence. The castle, as it stands today, was built in the late 14th century by Duke of Albany and Regent of Scotland, Robert Stewart; the construction is thought to have been completed under Stewart alone, with no major modifications or expansions made any time later. Stewart maintained residence in Doune Castle up until his death in 1420, when the castle, alongside Stewart’s dukedom and regency, was inherited by his son, Murdoch. This reign was short lived, as Murdoch and his two sons were imprisoned, and later executed, for treason in 1425. 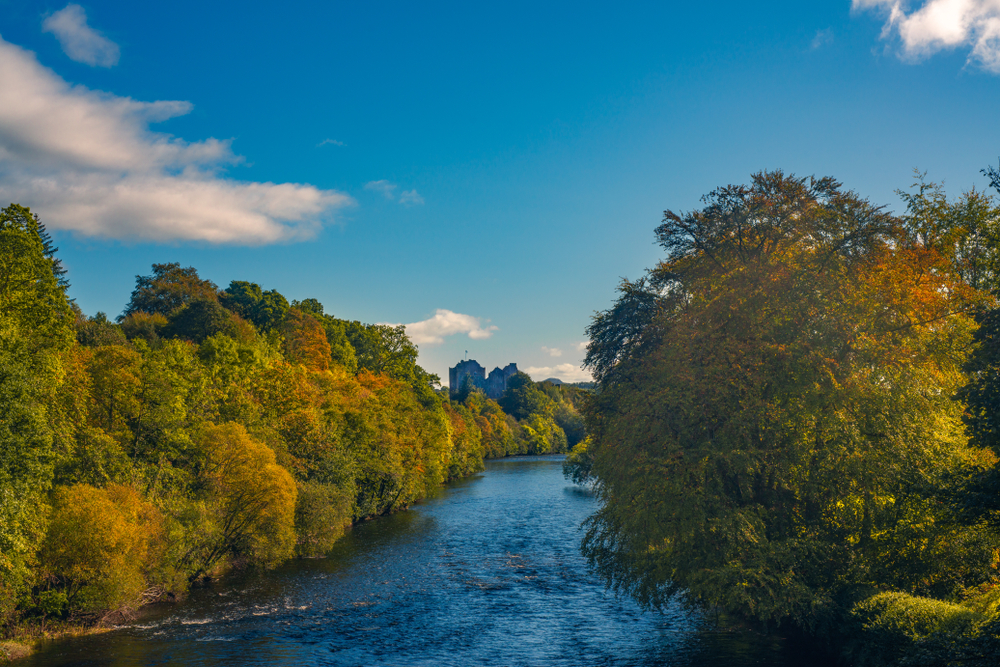 Doune Castle was then claimed by the royal family, and over time provided a place of respite for the likes of Mary of Guelders, Margret Tudor, and Margaret of Denmark, amongst many other note-worthy royal Scottish names.

Through the marriage of Margret Tudor and Henry Stewart, a descendant of Doune Castle’s original owner, Robert Stewart, the ownership of the castle returned to the original lineage, and Henry Stewart’s brother, Sir James Stewart, was made captain of Doune. In 1580, the grandson of Sir James Stewart, also named James, wed Elizabeth Stewart, who was the 2nd countess of Moray, effectively pronouncing James Stewart an Earl of Moray; the Earls of Moray in turn made Doune Castle their own, and the castle remained their property until the 19th Century.

In the centuries that followed, Doune Castle was used as a military base several times and, on occasion, received heavy attack; in 1645 James Graham, 1st Marquess of Montrose, occupied the stronghold during the War of Three Kingdoms; in 1654, during the Cromwellian takeover, a number of battles took place at Doune between royalists and Cromwellian troops; in 1745, Doune Castle witnessed its last military usage, as it came under the occupation of Bonnie Prince Charlie during the Jacobite uprising, and was used as a prison for captured government soldiers.

By 1800, following centuries of action, Doune Castle was in a ruinous state. It was restored in 1880 with new timber roofs fitted, and major reconstruction done to the interior. The Earls of Moray left in the 20th Century and the castle was taken over by the state in 1970. It received further minor reconstructions towards the end of the century, as the castle became the responsibility of Historic Scotland. 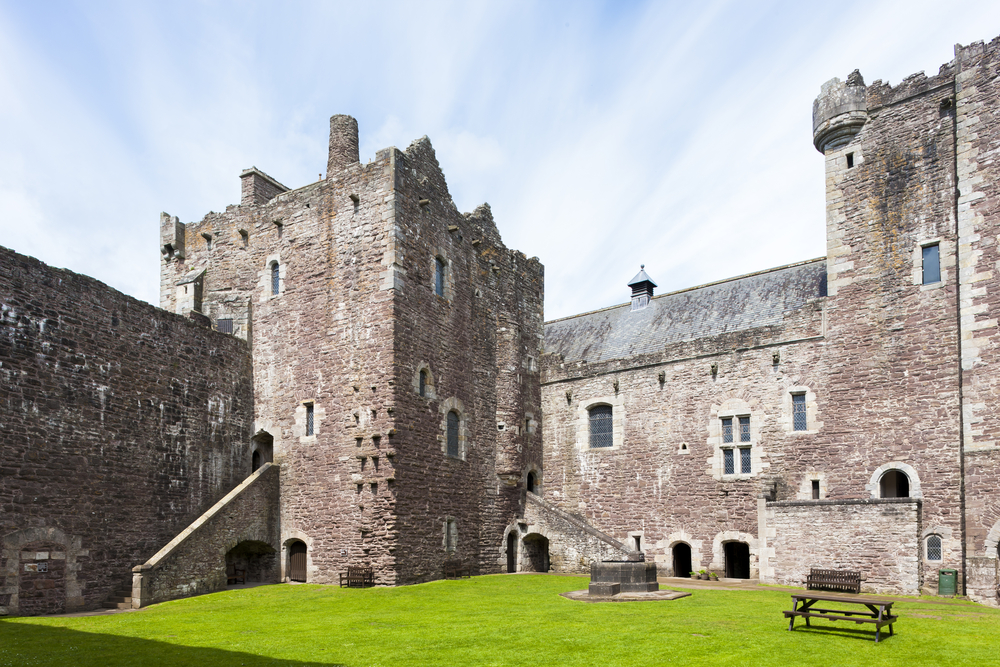 What films has it featured in?

Doune Castle’s 14th century masonry, its dramatic setting, and its visible decay, each create an irresistible allure for film and TV directors seeking to evoke the mood of the middle ages; this has lead to the site being used as essential filming locations in over 10 major productions.

It was first utilised by the Monty Python troupe for their debut big-screen outing, Monty Python and the Holy Grail; Doune Castle’s diverse range of features were essential to the Python’s low-budget masterpiece. Many of the castles that King Arthur stumbles upon in …Holy Grail are in fact just Doune Castle from different angles, externally and internally; most notably, the castle is used during the altercation between Arthur and the French soldiers – who are positioned along the castle’s eastern wall. The front entryway is also the location of the Trojan Rabbit scene near the end of the film. Internally, the Great Hall was used several times; firstly, as the setting of the Knights of the Round Table music number, and secondly, during the scene where Sir Lancelot interrupts a wedding.

Doune Castle has been used more recently in Game of Thrones, appearing throughout the series and under the ownership of several different characters. In the show, it is known as ‘Winterfell’, which, in series two, is declared the capital of a newly formed kingdom – which emphasises the importance of the castle to the series. Village sets were constructed around the castle to give the setting a fuller town feel, but Game of Thrones fans are sure to recognise much of the castle itself, externally and internally.

Doune Castle has also been used extensively in such films as Outlaw King, Ivanhoe, Elizabeth: The Golden Age, and such major TV shows as Outlander.

How do you visit it?

From Stirling, Doune Castle is reachable via a 25-minute car ride. From the village of Doune itself it is roughly a 15-minute walk away. And for a £9 entrance fee (free for Historic Scotland members), you will get access to the majority of the internal castle, so is definitely worth it!