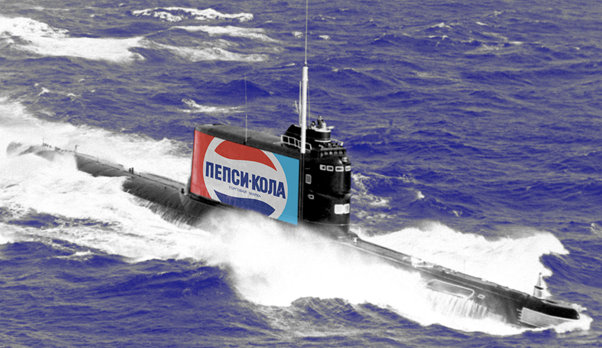 The unbelievable story of how Pepsi Cola once owned the 6th Largest Navy, but failed to win the cola wars in Eastern Europe.

During the reign of Joseph Stalin, the Soviet Union existed almost entirely free of western influence. Stalin’s U.S.S.R strove for self-sufficiency, meaning minimum effort was put into forming trade relationships with other states.

The Soviet Union’s totalitarianism, alongside its expansionistic polices, created widespread fear within in the U.S.A, culminating in a prolonged tension between the two superpowers, a period that came to be known as ‘the Cold War’.

Things changed when Nikita Khrushchev replaced Stalin in 1953. In an era known as the ‘Khrushchev Thawing’, repressions within the regime were eased while Cold War tensions were contained, and Khrushchev worked to better the Soviet Union’s relations with the rest of the world.

This era of diplomatic prosperity lead to the bizarre exchange between the Soviet Union, and the U.S.A’s other favourite soft drink, Pepsi-Cola, which resulted in Pepsi briefly owning the 6th largest navy in the world.

The Soviet Union’s initial taste for Pepsi can be traced back to ‘the Kitchen Debate’.

In order to build a diplomatic relationship with the U.S.S.R, then-President Dwight Eisenhower initiated a cultural exchange to occur between the two superpowers. It was decided that parallel exhibitions should take place, one in Russia and one in America, that would each showcase what it was like to live in respective nations.

The Soviet National Exhibition took place in New York and ran from June 1959. In a bid to assert their supremacy over America, the exhibition predominantly focused on the launch of Sputnik 1, the first artificial satellite to successfully orbit the earth. ‘The Space Race’ was an ongoing competition between America and the Soviets to see which nation could develop space-based capabilities the quickest and came to be a defining feature of the Cold War-era. Despite this clear bid for dominance, this first exhibition went by relatively incident-free.

The American counterpart, however, which took place in Sokolniki Park, Moscow, witnessed one of the most iconic political clashes of the Cold War-era. The exhibition itself, which opened in July of 1959, featured an all-out display of the latest in American hard goods, showcasing everything from hi-fi sets and vinyl records, to the latest in automobiles and farming equipment. Having lived a secluded existence for 30 years, the two million in-attendance Soviets were amazed at how far consumer culture had advanced in the capitalist world.

Then-Vice President Richard Nixon was flown over to attend, and infamously clashed with Nikita Khrushchev in what came to be known as the ‘Kitchen Debate’. On the opening day, the two representatives debated at various points in the exhibition, most notably next to a model kitchen, where Khrushchev criticised the abundance of American gadgets. An intense cultural clash ensued, and the two leaders traded blows over the western way of life. Luckily, before any serious armed conflict took place, Nixon was able to placate Khrushchev with a Pepsi.

Within Nixon’s entourage was future-CEO of Pepsi, Donald Kendall, serving at the time as the head of the company’s international relations. Given the Soviet Union’s outright rejection of all things capitalist, Kendall was taking somewhat of a risk in trying to promote Pepsi to the Soviets. Many other major American companies had refused to take part in the exhibition, including Pepsi’s main rival, Coca-Cola.

Since its inception, Pepsi-Cola had been losing the battle for soft drink dominance in America to Coca-Cola. Starting in 1893, Pepsi’s popularity grew due to its innovation as a brand; it was one of the first products to be shipped by motor-transport, while its use of natural ingredients set it out as a healthier alternative to Coca-Cola. Despite this, Coca-Cola emerged as the American people’s favourite.

Kendell took advantage of Coca-Cola’s absence at the exhibition, and asked Nixon to “get a Pepsi in Khrushchev’s hand.” Khrushchev, after Nixon pacified him with it, fell in love with the soft drink, and handed out samples of Pepsi to his associates. Kendell got exactly what he wanted, as newspapers around the world printed images of a rather joyous-looking Khrushchev brandishing a Pepsi.

Despite the positive reception Pepsi had received from the Soviets, it took over ten years for the soft drink to enter the Eastern Bloc market. This was due to, firstly, worsening diplomatic relations after several significant events, namely the Cuban Missile Crisis of 1962.

Secondly, a fundamental stumbling block was met in selling a capitalist product to a communist state. The soviet currency, the Ruble, held no value outside the U.S.S.R, making financial exchanges involving western nations an impossibility. Because of this, the only option for selling commodities to the Soviets was to barter.

A bartering agreement was reached in 1972, whereby concentrated Pepsi was exchanged for Stolichnaya vodka. This agreement allowed Pepsi to become the first Western product on the Soviet market, counting for its meteoric rise in popularity within the state; by 1981, the Kremlin had made 303.3 million rubles from the product alone. 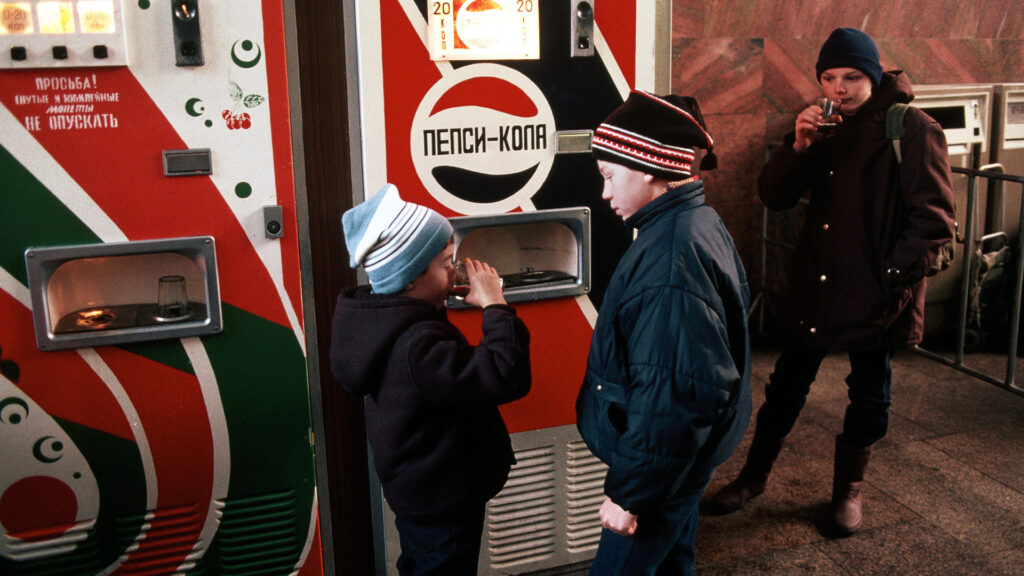 This trade deal was smooth sailing until the 1980s, when the Soviet Union began to fall apart. The Soviets faced unbearable shortages, and vodka production was severely hampered. Despite increasing adversities, the state was unwilling to give up what had become their most popular soft drink, and uncertain times lead to unusual decisions.

An impressive three-billion U.S. dollar-worth agreement was met in May of 1989, which, for a short period of time, turned the Pepsi-Cola Company into the 6th largest navy in the world.

In exchange for Pepsi, the Soviet Union bartered 17 submarines and three warships; a cruiser, a frigate, and a destroyer.

A highly unusual commodity for a soft drinks company to own, the fleet was bartered because of its value in the scrapyard, and Pepsi almost immediately sold the vessels on for profit.

Pepsi CEO Kendall famously quipped at the time “I’m dismantling the Soviet Union faster than you are”, in response to the U.S.A’s ongoing efforts to bring an end to the Soviet state.

The Soviet Union officially ended in 1991, and the state was broken down into smaller countries; all of which sell Pepsi today. Unfortunately for Pepsi, however, Coca-Cola swiftly moved into the post-soviet market and took over the number one spot.

Coca-Cola may be the most popular soft drink most of the world over, but at least Pepsi had a brief stint at being far more powerful than their rival in the Eastern Bloc; both by popularity and by naval-might.