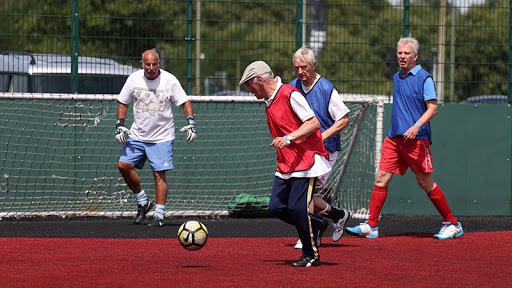 The pace of walking football’s growth is far from pedestrian. Phil Taylor explores the history of the game and what benefits the game has brought to individuals and communities across the UK.

Football is enjoyed all round the world and is one of the most popular sports to ever exist. Life is completely dominated around football from local Sunday league games to the World Cup spectacular that occurs every four years. So, with the popularity of the sport you expect there to be alternatives for everyone to enjoy and participate in not matter what their level. There are underage games for youth level football, five a side football, blind football and many more alternatives for whatever your footballing need may be. Included in these alternatives is something called ‘walking football’. But what is exactly is ‘walking football’?

Walking football is basically what it says on the tin; it is football, but you are only allowed to walk whilst playing. The game is aimed at players who are over the age of 50 years old and have a real passion for the game. Walking football first came about in 2011 in Chesterfield and the aim was to help men feel more motivated and exercise more regularly whilst enjoying the sport they loved.

However, after a Barclays advert in 2014 was produced and aired the sport became more popular as the word was out there about this fun new sport. After seeing the advert Steve Rich, who had to give up on his playing career after a car accident, created the WFU website to connect more clubs around the country so that they were able to see the impact of the game and how popular it was becoming. It was so popular that Glasgow Rangers, Raith Rovers and Hearts have created their own team; Hearts are now three-time reigning champions of the league.

In a typical city such as Glasgow there are fourteen sessions a week for walking football but across the whole of Scotland there over 100 sessions going on.

Because of the popularity of the game there are many tournaments around the world that cater for different age groups. Tournaments now have an over 60s and an over 70s range, so players are able to play against players who are more than likely of a similar physical stature as themselves.

So what are the rules?

It follows the rules similar to the regular rules of football, but it is closer to the 5 a side version than it is to the 11 a side version. However, with regards to the aspect of walking a player must keep one foot on the floor at one time and if it looks like running they will be penalised, and a free kick is given to the opposition.

Games last for 40 minutes, 20 minutes per half, and teams must have six players on either side; five outfield players and one goalkeeper. To keep players safe there are no slide tackles and in most games the ball is not allowed above head height. Just like most five aside games, no goals can be scored inside the penalty area.

Just like every other format of the game there are many disputes to the rules and players do tend to dispute the referee’s decision if they are deemed to be running or tackling too aggressively.

It is open to anyone and everyone over the age of 50. You do not have to be a professional footballer to excel in the walking football game and there are many who have never played the game. Take for example Bert Cunnigham who is Britain’s oldest player at the age of 90 and plays in goal for Edinburgh City. He stated, “I love playing, and I love afterwards having a wee chat and a coffee or a tea. If I can keep playing it, anyone can play it.”

However, many ex professionals have taken to playing walking football and even World Cup winner Geoff Hurst has been known to take part in a game. Several other professional players who have played the game include former Mansfield Town striker Alan Green or former Stoke City defender George Jackson. Having played professionally throughout their career they see walking football as a way of still staying in a game that they love despite their body not letting them do what they once did.

Even the Charlton brothers have got involved…however it is not Jackie or Bobby. Tommy Charlton, aged 74 has followed in his brother’s footsteps and has even played for his country just like his older brothers. He declared, “I never in a million years thought I’d follow in the footsteps of my brothers and represent England. I was shocked when I got the call, but am delighted to be in the squad”

Countries such as England, Italy and Sweden were all meant to compete at the 2020 World Cup, but it has sadly been postponed for a year due to the coronavirus.

So what are the main benefits of walking football?

The main reason older players get involved in football is certainly for the health benefits. Many who start playing are either unfit, have underlying health issues or struggle with fatigue quite easily. However, it has been stated that walking football can improve a person’s postural balance, blood pressure, resting heart rate, lower their cholesterol, improve their blood sugar levels, bone density and improving reactions, whilst slashing the odds of suffering from type 2 diabetes.

As well as physical benefits walking football also has mental health benefits. It is proven that exercise has a vital part on your mental health and generally makes you feel better for taking part in exercise as you try to stay fitter. Walking football is no different as players are in an active playing situation where they have to be on their toes and concentrate on proceedings in the game.

What many people say when they have to give up a sport is that they miss aspects associated of being part of a club. Walking football can help make new friendships, promote being part of a team and produce a fun but competitive atmosphere that you may have been missing from other aspects of trying to stay fit.

What do players and coaches think of the game?

John McKeller, founder and coach of the walking football team BayCity Strollers in Kent feels that the sport is vital for the over 50s. “Some of our members come just for fitness, while some want get back into football and for others it’s to help with health issues,” McKellar explained.

“We’ve also had players with mental health issues who have benefited massively from their involvement in walking football.”

Player John Powell who currently plays for senior Seasiders in England, believes that walking football keeps him fit and active on a social level. “It is great fun and we have great banter. I get to play twice a week on really good modern pitches and the sessions are run by Blackpool Community Trust who are associated with AFC Blackpool and Blackpool FC”

“We are a thriving club with over 65 members spilt over three age sections. It is fantastic for players who are not so social as they can interact with so many players and we put on parties and meetings so we can stay connected as a club”

He even added, “We have even been on tour together in Spain!

Jim Corstorphine, who plays for the Fife Wanderers in Scotland stated how he wanted to get into the sport because he felt he wanted to stay fit. “I was made redundant from work and I wondered what I could do in my spare time, I needed to stay a bit fitter. So, I saw an ad in the local paper and I went to training on a Wednesday and never looked back. I have lost about a stone!”

Like Powell’s view he enjoys the social side of the game. “I like the camaraderie as nobody takes it too seriously. I have made a lot of new friends and most of the guys who I play with I have never met them before in my life”.