Home Over The Hump Featured – Brosnaichte Imagine if Rugby had no rules – welcome to the brutal Georgian... 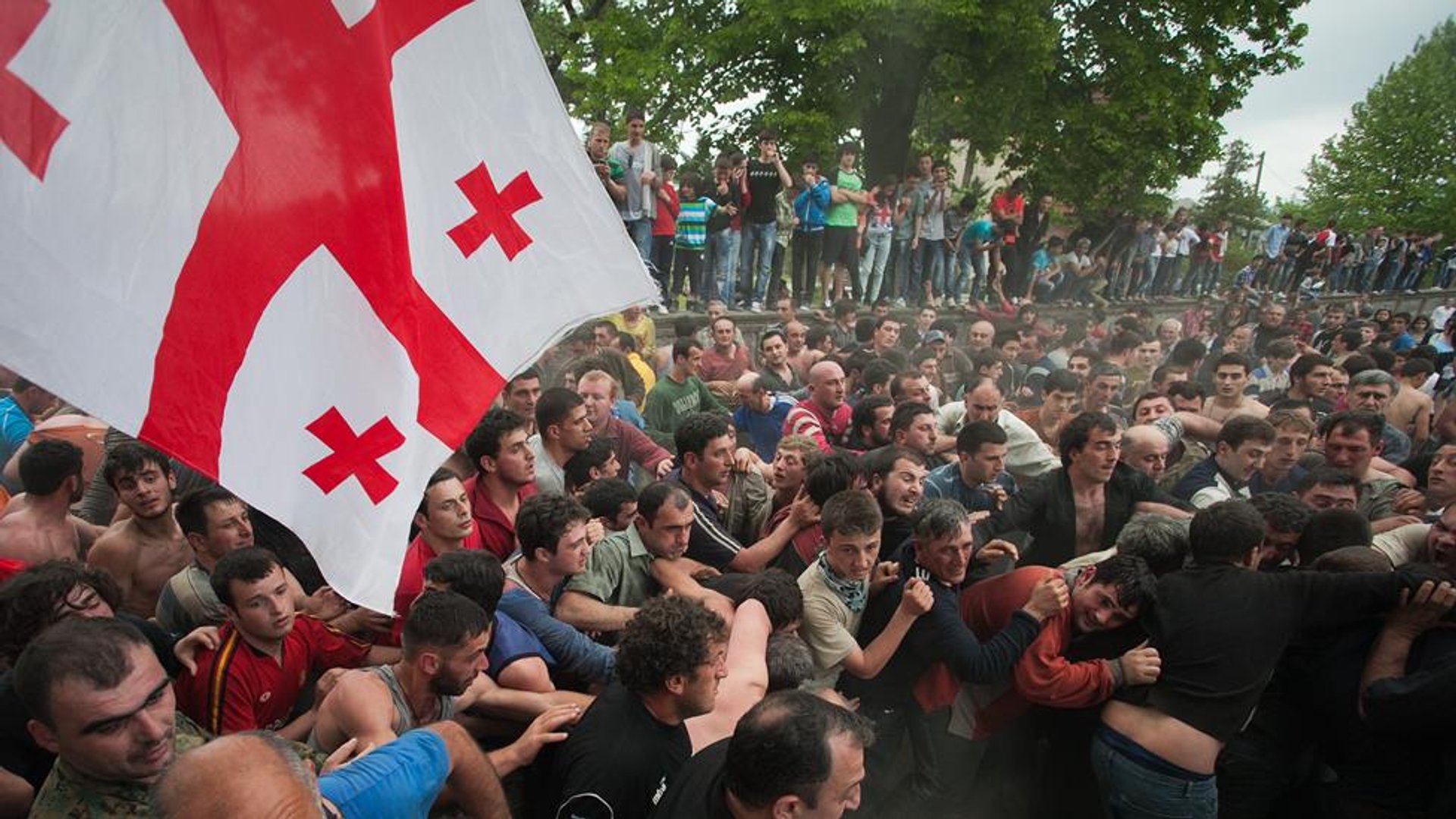 Imagine if rugby had no rules. Dating back 300 years, the sport of Lego Burti is almost unknown outside it’s native Georgia, but once seen, its brutality means it is rarely forgotten.

Every Easter, the entire village of Shikhuti in Georgia participates in a traditional game called Lelo Burti. This game has been played for hundreds of years and is the Georgian national sport, however, little is known about it around the world.

The game is brutal, injuring countless participants every year. This does not put people off though, drawing visitors from all over the country to watch this fascinating sport. Lelo Burti was played throughout the region of Guria but now it is only played in Shikhuti and is being kept alive by the locals.

There is no limit to the number of participants and there are also no rules. The result is a bloody, intense competition creating a hybrid somewhere between a rugby scrum and a large-scale brawl. There are two teams, each is assigned an end of the village with their objective being to get a leather ball from the centre of the village to their end. 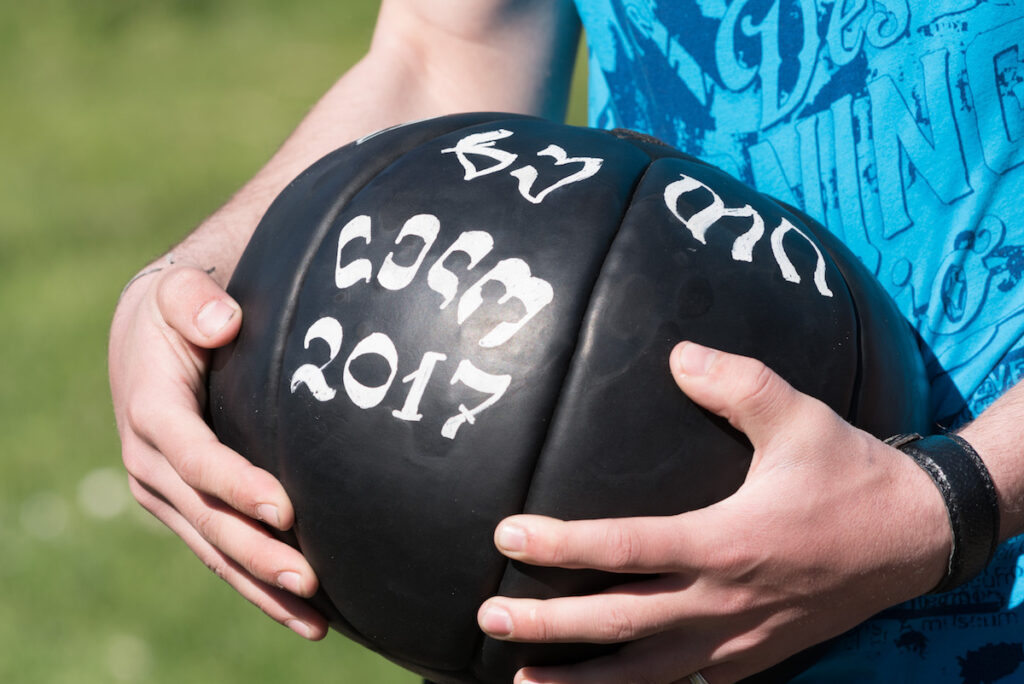 The ball is made of leather and a new one is sewn every year. The ball is brought to a priest and is filled with sawdust and sand from the village – once complete it will weigh around 18kg. As the ball is being filled, the priest blesses the players, once the ball is filled and the blessing is complete, it is taken to a local church – at 5pm the priest throws the ball into the centre of the village to start the match.

The majority of the injuries which occur during play happen in the first five minutes with players seeking medical attention, however, most of these will re-join the game later on. The centre of the mass around the ball is the most dangerous place to be as this is where the main fight to push is – women and children are allowed to play but not in the middle. The players are split into categories, some are there to hold and move the ball, some to fight for it and then there are the others who stay towards the outside to direct the movement of the game. 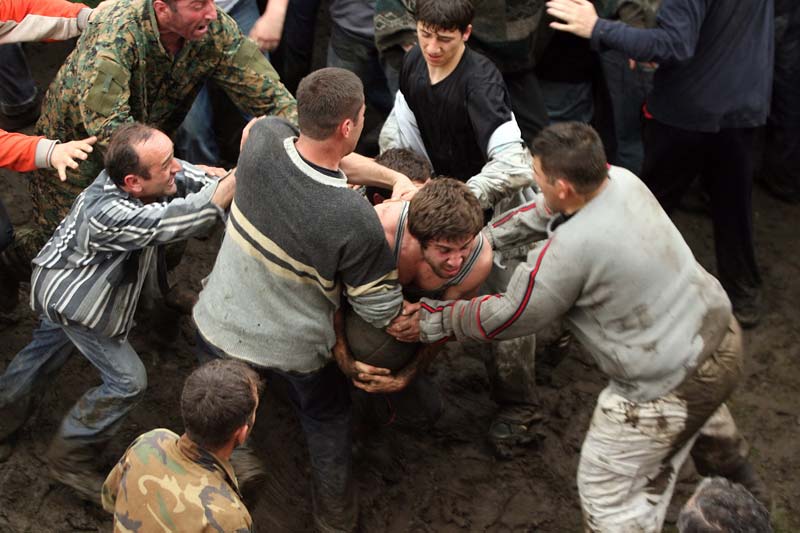 Once a team emerges victorious, they are awarded the game ball which they will then take to the grave of the last person to die in the village to honour their memory. The ball is a symbol of victory and respect amongst those who participate in this ancient game. Lelo Burti gives the citizens of Georgia a sense of pride in playing their national sport, carrying on the traditions of their ancestors and honouring their lost compatriots.

Although the traditions of Lelo Burti have remained largely the same, there have been some changes. Firstly, the name translates literally to ‘Field Ball’ as originally, two teams of a few dozen players each would play the game in a field divided by a stream with the aim being to get the ball across the stream to the other team’s half of the field. There were many other variations, sometimes playing over several miles with players having to traverse a variety of terrain including hills, marshes, woods and valleys – sometimes it was even played on horseback! 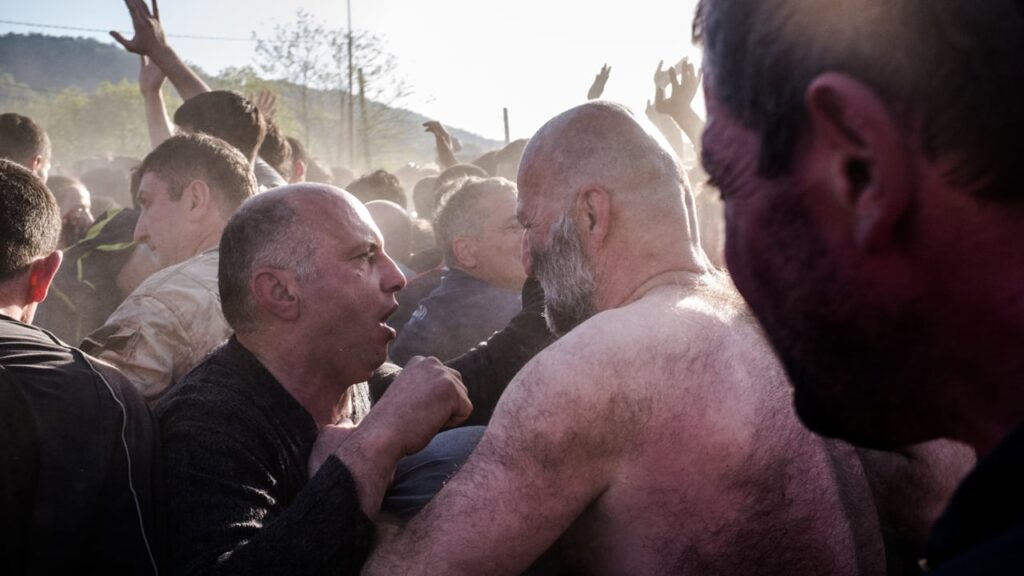 During the Soviet era, Lelo Burti was standardised, the ball was still made of leather but only weighed around 2.5kg and was stuffed with grass, horse hair or sheep’s wool. A standard pitch was defined as 90-135m long and 60-90m wide. A variety of rules were introduced, much like rugby, teams were 15-a-side and allowed forward passing. You were allowed to knock the ball out of a player’s hands but not to block players who did not possess the ball. Pushing, tripping and jumping on other players was also prohibited. Each team had a goal mouth and the team which carried the ball into their opponents goal the most won. Players were only allowed to handle the ball for five seconds before passing and games were played over two thirty-minute halves.

Despite the traditions of Lelo Burti sounding strange to those looking in, the game itself has many similarities to Rugby Union. According to the Georgian Rugby Union, playing Lelo Burti is the reason for their international successes – it’s in their blood! Playing Lelo Burti, along with the geography and genetics of Georgian players makes them a force to be reckoned with. The game has had such an impact that the team is affectionately known as “the Lelo’s”. As with many former soviet countries who struggled to form a national identity, Georgian players were forced to play for the USSR rugby team for the majority of the 20th century. Despite only playing their first game in 1989 they are currently sitting 12th in the world rankings! 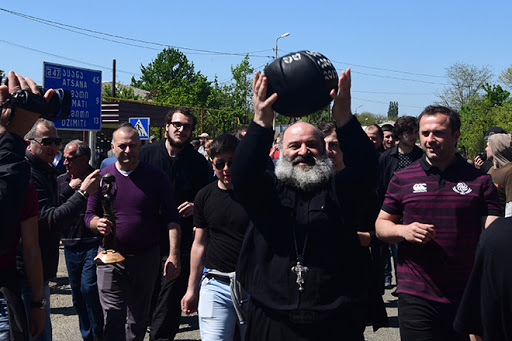 Unfortunately, the rest of the world is unlikely to see or participate in a traditional game of Lelo Burti without going to Georgia as the game originates and stays with them with no international games being held – we will just have to settle for rugby.

In these modern times, it is encouraging to see that people still participate in traditions that have been passed down through hundreds of years and with such ferocity and passion. This national sport continues to draw intrigue both in and out of Georgia and has heavily influenced their success in rugby. With the game producing such a high level of both excitement and participation, it’s no wonder it has stood the test of time. I hope that it is carried on into the future and maybe I’ll even see a game being played one day!

Have you ever played or watched Lelo Burti live? Let us know!