A mysterious headstone engraved with the simple words ‘In Memory of Sundays 1977-1989’ is to be found just outside the door to Glasgow Cathedral. It has intrigued many a visitor, and its meaning may remain a mystery.

Inside of gates of the notorious Glasgow Necropolis lay the bodies of fifty thousand individuals. From war heroes and political dignitaries to the unmarked graves of forgotten lives, the graveyard represents all walks of life and all forms of death. However, just outside of gates of Necropolis, in front of the door of the Glasgow Cathedral rests another headstone, but not one that marks the place of a body. It reads: In Memory of Sundays 1977-1989. The small plaque, which remembers a day instead of a person, provides more questions than answers. One could ask: Did Sundays only begin in 1977? And how did this day of the week pass 28 years ago without anyone noticing? But the real questions to be asking are: Who placed this marker? And what did Sunday mean to them? 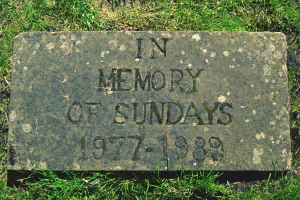 The obvious first conclusion we draw when looking at this headstone, considering its placement outside the Cathedral is that it is a critique on the apathy applied recently to religious practice. Sundays just aren’t recognized as a holy days the way they used to be. However, then the dates come to mind. Considering the Catholic religion origination far before 1977, this idea can be tossed to the wayside.

Another popular theory among curious spectators is that the marker is in memory of the glory days of a certain sport’s team. Was there a football team that made Sundays the best day of the week between 1977-1989? Perhaps.

A favorite theory was submitted by an anonymous person on Reddit which reads “In Memory of Sundays was a Scottish post-hardcore emo rock band that existed between 1977 and 1988 when their lead singer was killed in the Lockerbie Bombing. The memorial service for the crash was on January 4th 1989 despite the crash technically happening in 1988.”  This is by far the most intriguing and tragic speculation we found on the gravestone; yet, there are no facts to back it up. There are no records of a band by that name, and there certainly is no trace of the band’s lead singer being on that flight or killed on the ground.

The most solid theory out there, and also most plausible, is one submitted by the Glasgow Cathedral itself. It is that is marker was set out by a member of the church to remember her time in the church’s Sunday school from 1977-1989. And this may very well be the case. However, even if the stone was created to commemorate just one person’s experience in the church, the stone can mean different things to different people.

The gravestone works as a reflective art piece for the people around the world to wonder what it could mean, and perhaps that is what is so special about this marker. Sundays are an important day in every country and almost every culture. It is a day of rest and relaxation, a day to spend with the ones we love most, a day to worship, a day to celebrate a favorite sports team, and a day to heal before taking on another. And as life becomes more and more hectic, the sacred nature of Sundays is an easy thing to be forgotten.  Perhaps the answer to the meaning of this stone are not to found in the external world. Maybe the visitor only needs to look inward to find the message that has been lost of the importance of Sundays.