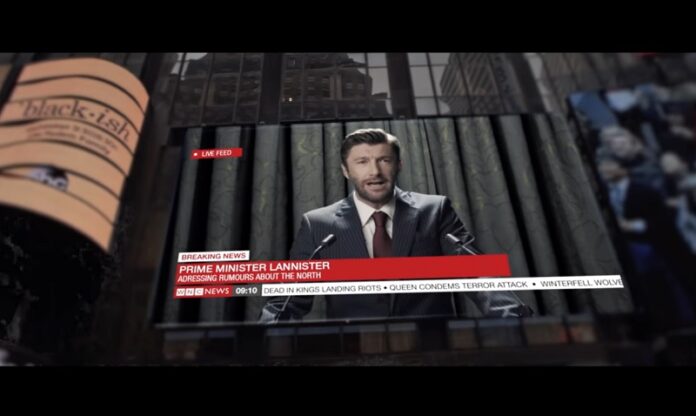 It is just over a year since the biggest TV series of all time came to an end. But that has not stopped Game of Thrones fans wanting to continue the story, some even imagining what a modern day Westeros would look like today.

Designer James Shadrach has created a series of wonderful maps of modern Westeros which are sure to delight fans. Take a trip down the new W1 motorway from King’s Landing to Winterfell, spend some time at the Greyjoy Museum of Contemporary Art, before heading up to the Watchers of the Wall Heritage Trail and perhaps take in some skiing at Craster’s Keep!

Game of Thrones is a franchise which has had a cult following since the release of the first book by George R. R. Martin in 1996. However, what turned the books into a worldwide brand was the television series which began in 2011. For the best part of a decade, this escalated into a global phenomenon with the final episode in 2019 gaining 19.3 million viewers across live, streaming and on-demand services in the US alone. 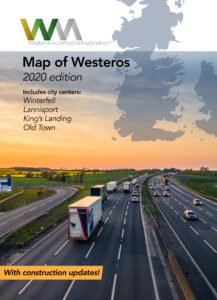 The reach of Game of Thrones is truly remarkable, inspiring fans all over the world to produce their own vision of the series in their own way. One such fan is James Shadrach, a designer based in St. Louis in the USA. James set out to create a modernised version of a map of Westeros. Based on the UK’s usual map design, updating it to reflect what Westeros would look like in 2020.

James decided to undertake the project as the TV series was coming to a close. James’ choice to use the UK as his base was a logical one. Not only is the depiction of Westeros very similar to Great Britain geographically, the wall to the north resembling Hadrian’s wall built by the Roman’s to keep out the Celts (rather than white walkers and wildlings). There are also similarities both in name and nature between Lannister and the aristocratic title of Lancaster. 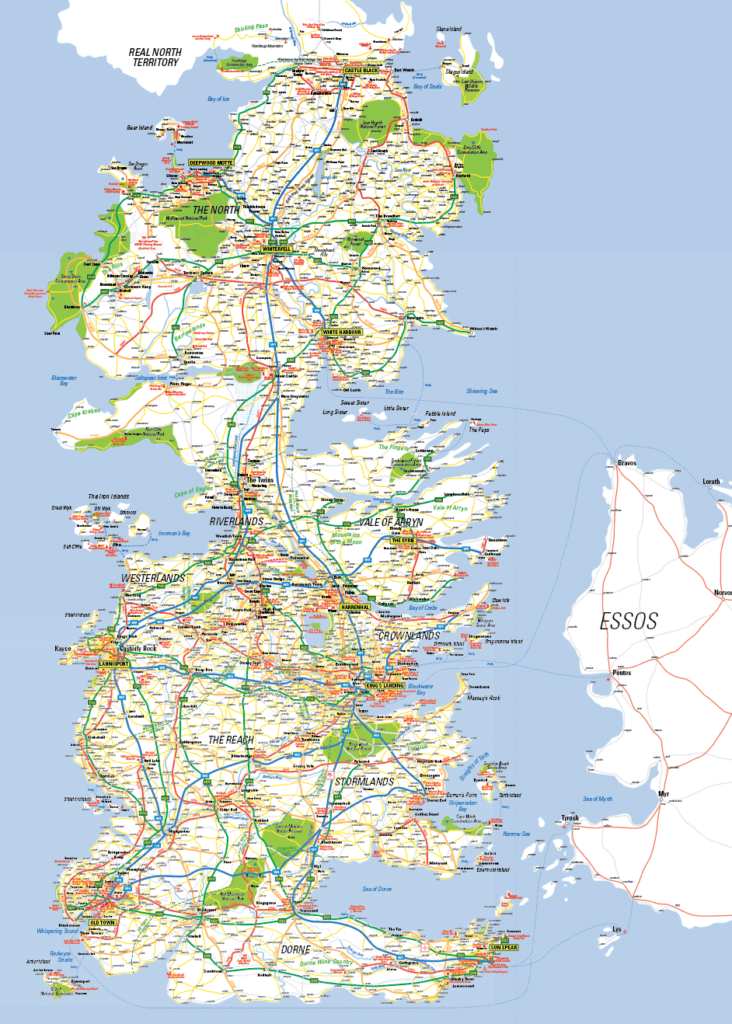 James set to work on his map, aiming to include as many locations, character names, Easter eggs and humorous points of interest as possible. The first issue to settle on (or overcome) was the scale. Due to the relative size of data to include in a smaller area presented with the geography of the UK, James had to use a sliding scale to accommodate everything he had in mind, stretching areas to fit so that smaller details could be included. 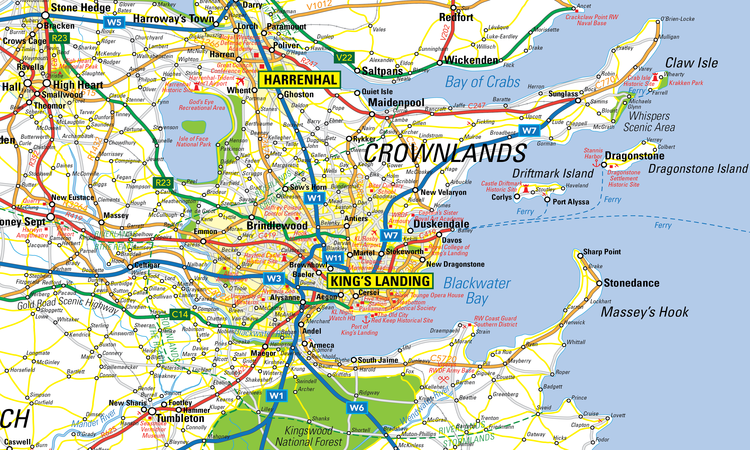 After settling on how he was going to scale it, next James had to look at roadways. Coming from the US, James was confused initially by the layout and numbering of British roads as they do not follow the sequential numbering system used in the US. James proceeded with the British model for roads but using a US style map colouring system – creating a hybrid road model especially for Westeros. He adopted the motorway numbering system, substituting the M’s (for motorway) for W’s (as in Westeros) and numbering them in the order he thought they would have been built – W1, W2, etc. and colouring them blue. The green controlled access provincial highways were named after the area they were located in, i.e. the Crownlands would have the C14, Dorne, the D44 and so on. The red roadways were given three digits and the yellow four digits, each preceded by their region character. 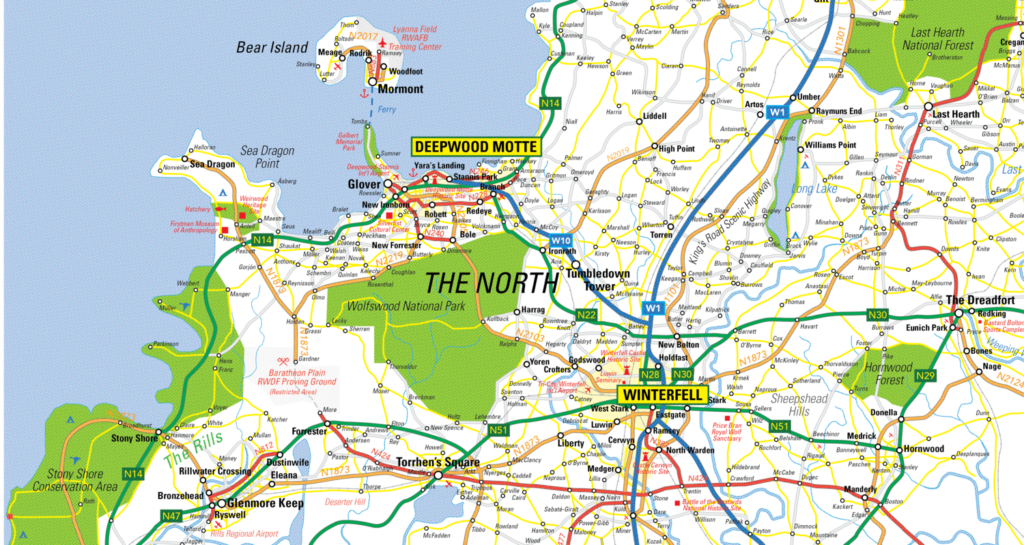 The next step was to sort out the settlements. Due to the number of villages there are in England, this posed a problem due to the relative sparseness of Westeros. This is where James really stepped up his game. Outside of the major cities, he went on to name all of the small villages but was limited using city, character names and event references from the series. He therefore proceeded to trawl through the internet, finding names of crew from the show – even down to the caterers and horse wranglers! Once this was complete, he slotted the names against the locations to fill out the map. 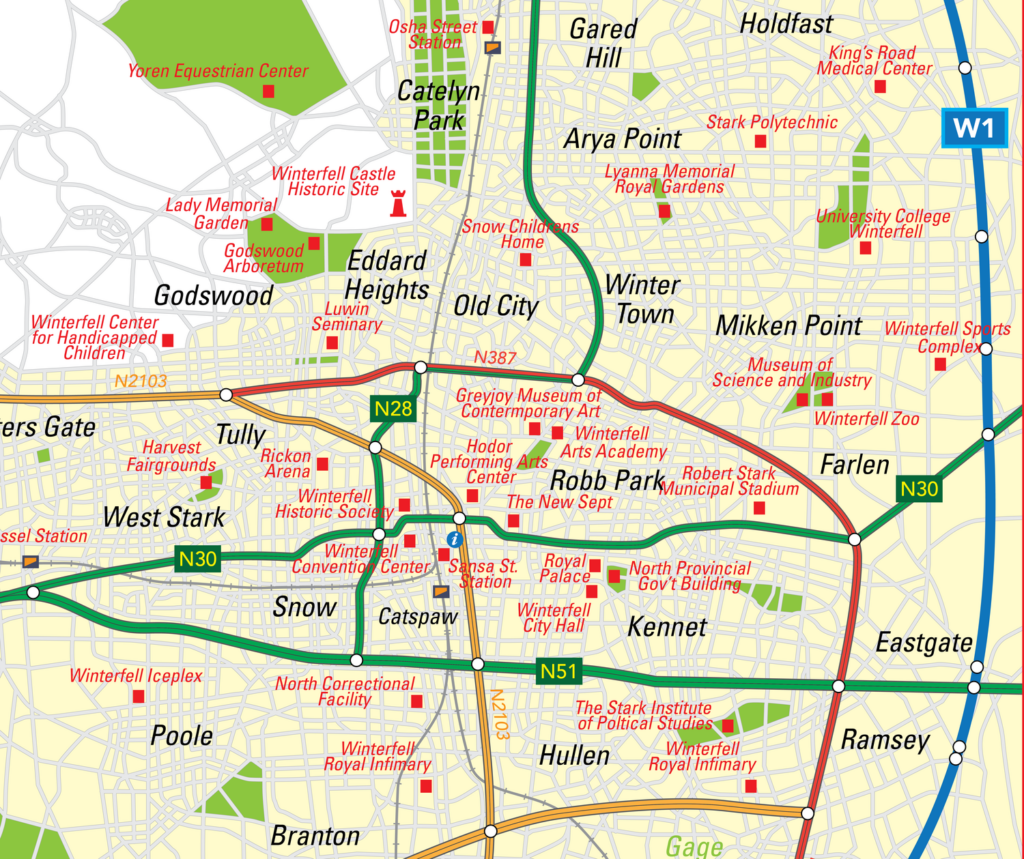 James is a huge fan of the show – as clearly shown by this project. However, he has not read the books so made use of one of the many blogs made by fans to add some details missing from the TV show, adding yet another level to this already amazing piece of work. 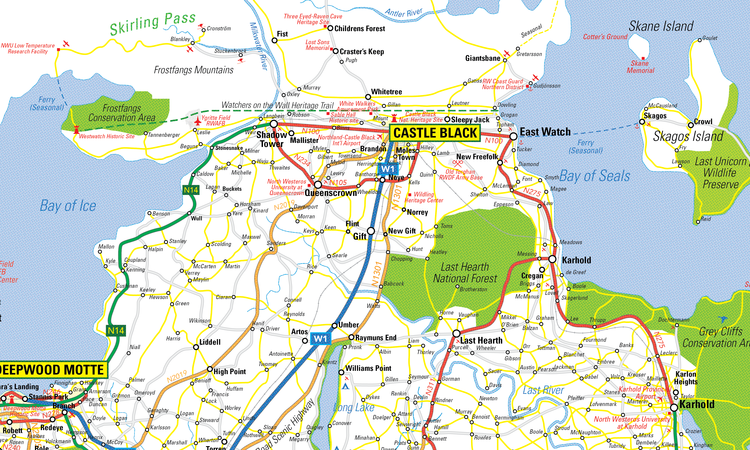 You can see the map in detail over on James’ YouTube channel where he has done a series of videos showing each area as he was making the maps. You can visit his business website here, and ind further examples of his incredible maps.

Since the show came to an end, fans have been yearning for more. Those who have read the books are pressing George R. R. Martin to release the next instalment which he is working on but is yet to publish. There may be something on the way though with trailers being released for a modern day spin off series called ‘Westeros’.

The premise is very intriguing, throwing houses Stark, Lannister and Targaryen into a new age – seeing how they make use of technology against each other and how producers could maintain the fantasy element. 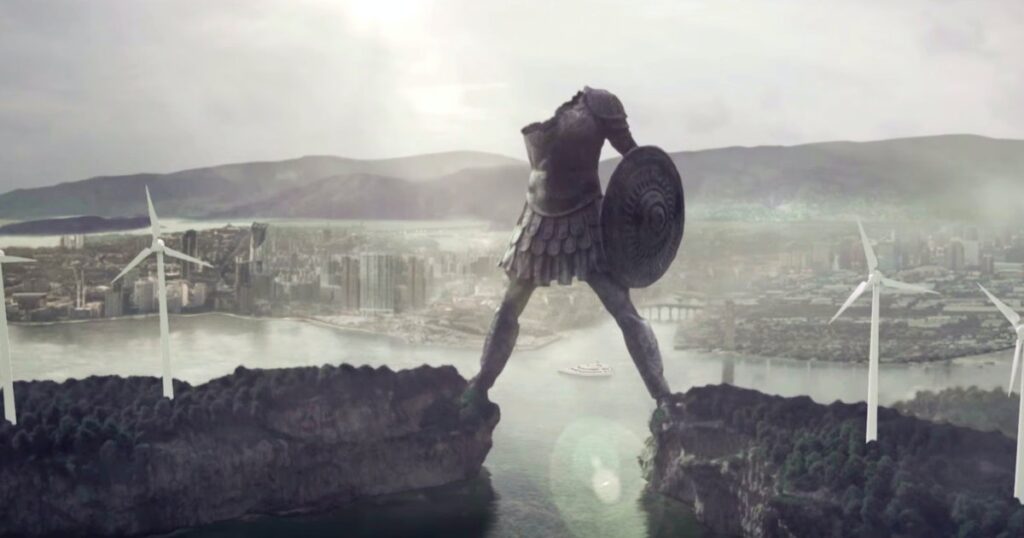 Like James’ map, the trailer seems to repurpose existing locations showing a close up of the bright lights of Targaryen square in what seems to be Manhattan while the Lannister’s have their place in Kings Landing set in London. Despite looking like a modern take not all of the original pieces have been stripped away, we still get glimpses of a dire wolf and a winged shadow looming over a city – perhaps one of Daenerys’ dragons. 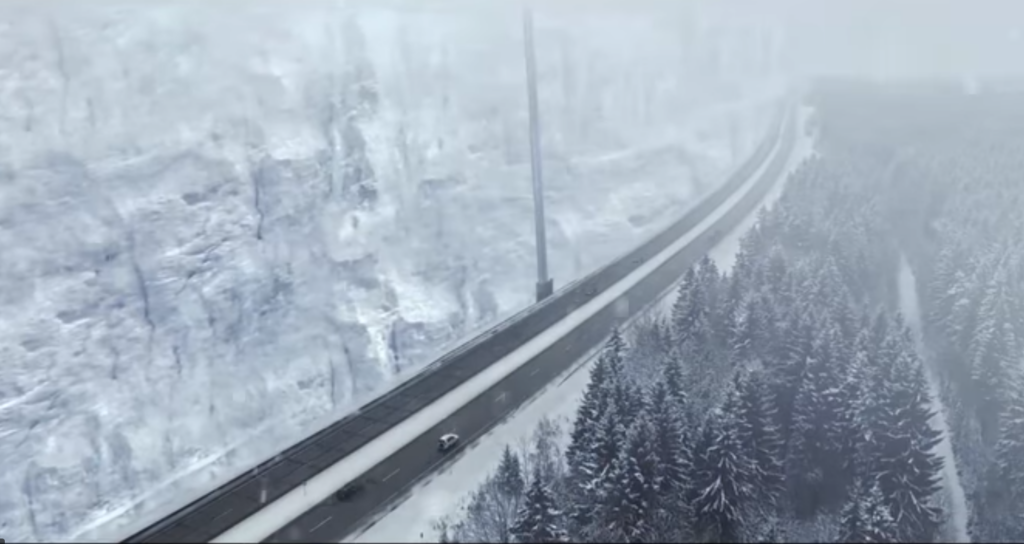 The authenticity of the trailer is, however, being called into question. The trailer was released in 2017 as season 7 of the HBO series was coming to an end. The video was uploaded by a channel titled “Westeros the Series” with little other information. Despite the video stating a 2019 release, this has come and gone with nothing to show and no videos being posted since 2017, suggesting this may not become a reality and is just another fan made project – a very impressive one none the less!

If we are lucky, the efforts of fans like James and whoever produced the modern Westeros trailer will be picked up by the likes of HBO and turned into a new series of the franchise which is globally adored. Who wouldn’t want to see a dragon take to the skies above London or armies marching into the Scottish hills in search of white walkers?!

What would you like to see from a modern Game of Thrones? Let us know!

All maps published with the express permission of James Shadrach of http://www.jamesshadrachdesign.com/