Where I Live Globally Local
Home Over The Hump Featured – Brosnaichte No Sight Of The Great White in Scotland – The Mystery is...
Facebook
Twitter
Pinterest
WhatsApp 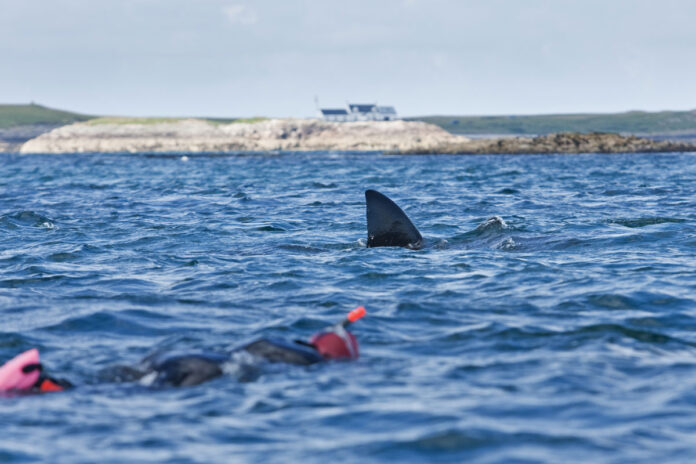 Scotland’s Coastal waters are home to five species of sharks, killer whales and plenty of prey such as seals. Scotland would seem to have the perfect habitat conditions for great whites to thrive, yet they are not seen. Why?

Scotland is well known for its wildlife on land, in the air and in the sea. With a huge variety of species in each of these it is a mystery why some are present when others (while perfectly able) make rare, if any, appearances. When someone says shark to you, your mind probably goes to the coast of a tropical island not the chilly waters of Scotland but this is an ideal climate for some species of these ancient fish.

There are currently five species of shark living in Scottish waters, one of which is the basking shark – the second biggest fish in the world’s oceans, only surpassed by the whale shark. Divers from all over travel to Scotland to swim with these magnificent creatures. Basking sharks were previously hunted in Scotland for oil in their livers, which was used to make cosmetics, perfumes, lubricants and lamp oil. The hunting of these fish ended in 1994. In the past they were also subject to a targeted fishery in Scottish waters which is still an ongoing practice in other places in the world, however, basking sharks are now protected in Britain.

Other breeds present in Scotland’s icy blue depths include the porbeagle, shortfin mako, tope and dogfish sharks. Despite the fierce image of sharks presented by books and Hollywood movies, the species of shark present in Scotland’s waters pose little to no threat to humans due to their size, range of prey and the depths or distance from land where they dwell.

With many species of shark making appearances in British waters, one which seems to visit very rarely, if ever, is the most famous of them all – the great white. Despite what seem like ideal conditions for these fierce predators there are little recorded visits of them to our shores. With its rugged coastline, increasingly warmer waters and large seal population, Scotland seems to be an ideal destination for great whites – especially in the summer time when conditions can almost compare to the coasts of South Africa and New Zealand where these fish have a huge presence.

With global warming being a major topic in today’s worldwide discussions, it has been thought by some experts that by 2050 rising seawater temperatures around the UK could bring up to 10 new species of shark to our shores. When you take warmer waters into account, along with the thousands of kilometres great whites can cover during their annual migrations, Scotland with its large seal population would be an ideal summer hunting ground. Yet, despite all these factors, they remain strangers.

The absence of great whites is contested among experts. While some say the warmer waters will be attractive to alien species of shark, others say that this is only one factor which may not guarantee the arrival of new sharks, barring the occasional stray which is currently the case.

While there have been several reported sightings of great whites over the years it is difficult to verify their accuracy. One expert on the subject, Mr Richard Pierce who serves as the chairman of the Shark Trust, has investigated more than 80 reported sightings of great white sharks around the UK over the last 14 years with only 7 being deemed credible. The most convincing account of a UK sighting was in 1999 off the coast of Cornwall where three separate fishing boats described seeing a great white in the space of three weeks between their statements. Although no great whites have been caught in UK waters there have been a handful of catches on the coast of mainland Europe. The closest recorded capture was in the waters off La Rochelle in Western France – a meagre 200 miles from the UK. This is an incredibly short distance for great whites to travel when you consider the vast mileage covered across their annual migrations.

The puzzle of why no more than the handful of great white sharks which may have been sighted remains unsolved with many people in the world of marine biology trying to conclusively say why we do not have an established population. With the warmer waters around our little island being a relatively new point in the 16-million-year history of these animals, it may be that the great white community simply does not know about the fantastic environment provided to them here. When you consider the nearest large great white colonies are down towards South America or South Africa, the distance they would have to travel on a migration would be a huge undertaking. The other obstacle stopping possible visitors, from South America especially, is the mass of Ireland effectively blocking the route to Scotland if they were to follow the Gulf Stream. This is unlikely, however, as Ireland has an extremely low number of recorded great white sightings. In 2014, a tagged great white named Lydia was tracked moving from the south-eastern coast of North America across the Atlantic towards the UK. Despite the exciting prospect of Lydia being tracked across the ocean to our shores, she turned back about 2000km short of Ireland. To get to this point it took her 374 days to traverse that much of the Atlantic. Although great whites can travel for up to 6 weeks without stopping for food, the potential timeframe of taking well over a year crossing open ocean to reach a new continent would simply not be a worthwhile migration for these animals.

Unfortunately, with only a few credible sightings and no hard evidence to show the presence of great whites in our waters, we cannot conclusively say if there are any visiting and staying here. With the warmer waters and abundance of seals (the great white’s main prey in places such as South Africa) it may only be a matter of time before we can add the most famous ocean predator to our already amazingly diverse aquatic community. Perhaps soon we may see a great white caught or an already tagged visitor arrive here, all we can do is wait and see.