Sushi comes in many forms, not just the nigiri variety so popular in Western restaurants and supermarkets.

Sushi traces its origins back for millennia, to the rice fields of Asia – China, to be specific. This may be shocking to you, as most people assume that sushi was first created in Japan. However, this is not the case. While Japan is certainly the sushi capital of the world – and responsible for introducing the dish to travellers – sushi traces its origins back to a Chinese dish called narezushi.

Today, Sushi is most commonly associated with Japan but is found in eateries across the world.

Here is our top ten list of sushi types!

Makizushi, also known as “norimaki,” refers to a type of sushi where rice and ingredients are carefully rolled in a sheet of nori seaweed, which is then cut into smaller pieces. It’s believed that makizushi came into existence in the early 1700s, soon after sheet nori was invented with a similar technique used for paper making. The name norimaki is made up of two Japanese words: “Maki” meaning to roll and “nori” referring to the toasted sheet of nori seaweed used to wrap the ingredients.

Long, thin rolls typically featuring just one ingredient like a strip of fresh tuna, cucumber, or pickled daikon are called hosomaki. Futomaki (futo meaning fat) is a thicker variety of makizushi, and includes a combination of complimentary ingredients. Futomaki, unlike in foreign countries, is less likely to appear at sushi restaurants, but can usually be found in bento boxes and supermarkets. Uramaki, often called “inside-out sushi” in English, is a modern version of makizushi believed to have been invented in California in the 1960s. It’s made by first layering the rice onto the bamboo sushi mat, then laying the nori sheet on top followed by the remaining ingredients, before rolling. It’s often rolled in sesame seeds, which easily stick to the exterior rice or topped with tobiko fish eggs for extra crunch. 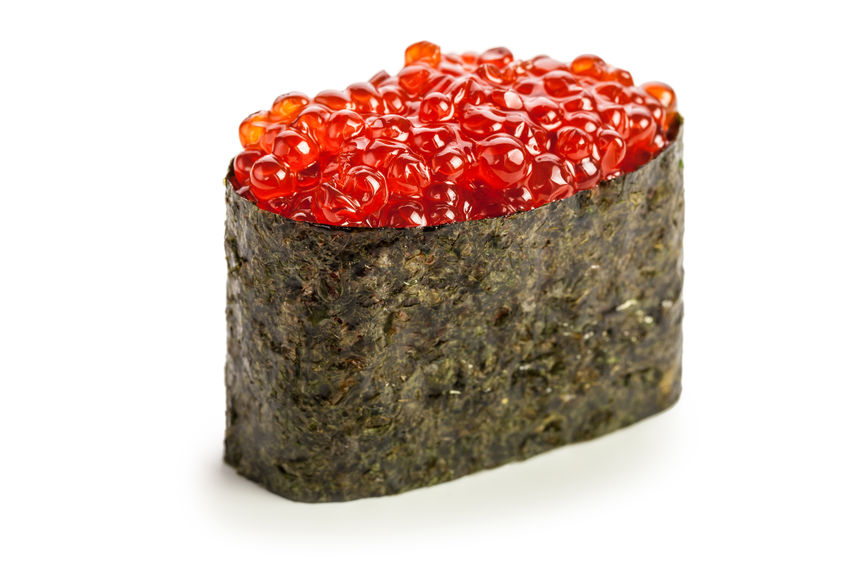 Gunkan maki is another type of maki—“rolled” or “wrapped” sushi—and was invented in a Ginza sushi restaurant in the 1940s. It’s made by wrapping a wide strip of nori around a rice ball while leaving enough space at the top to be filled with various ingredients. The name, translated as “battleship” or “warship” sushi, comes from its shape, resembling a tiny ship. Popular toppings for gunkan maki include uni sea urchin, squid, salmon roe, negitoro (a blend of fatty tuna belly and green onion), potato salad, and kanimiso (blended crab brains). Gunkan maki is commonly found both in takeout sushi bento boxes and at sushi restaurants 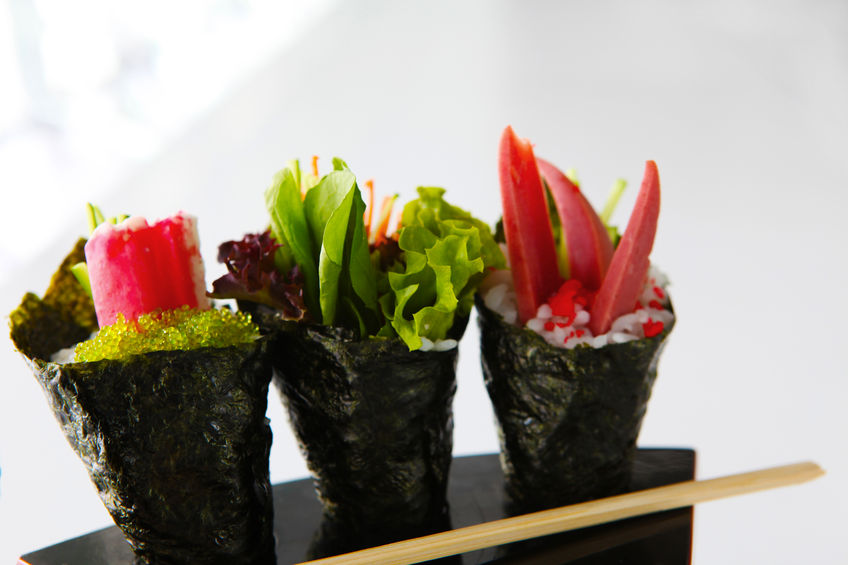 Temaki is a novel type of sushi with a shape resembling that of an ice cream cone. To make it, rice and ingredients are held within a sheet of nori wrapped into a conical shape. It’s popular at restaurants, as well as for making at home, given its simplicity. Temaki lends itself to a variety of fillings, with some popular types including umeshiso—a paste made of fresh shiso leaf and umeboshi (pickled plum), negitoro, squid with and without natto, and sweetened omelet. 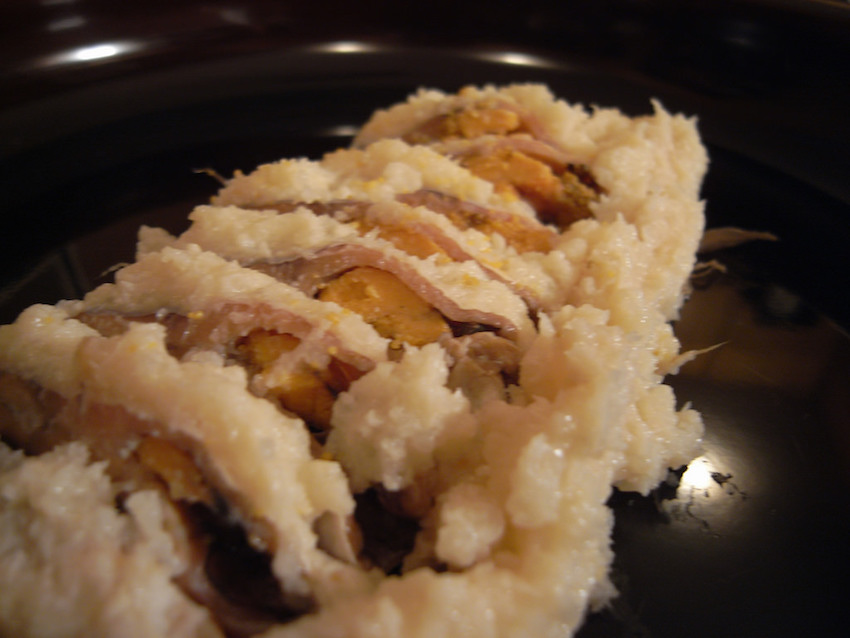 Fermentation was a technique used the world over to preserve fish and other products before the invention of refrigeration. Japan’s narezushi—a dish of fish preserved for several months to several years in salt and rice—is a perfect example of this technique that dates to the Nara period (710–794). Narezushi is commonly regarded as the original form of sushi, even though the rice was originally discarded before eating. Over time, the fermentation period became shorter so that the rice could be eaten with the fish, which then gave way to more modern types of sushi.

These days, narezushi is generally less popular because of its extremely pungent flavor. However, funazushi of the Shiga prefecture remains popular, which is made using the nigorobuna fish from nearby Lake Biwa. Because it takes up to five years to ferment, funazushi is considered a regional delicacy due to its high price. 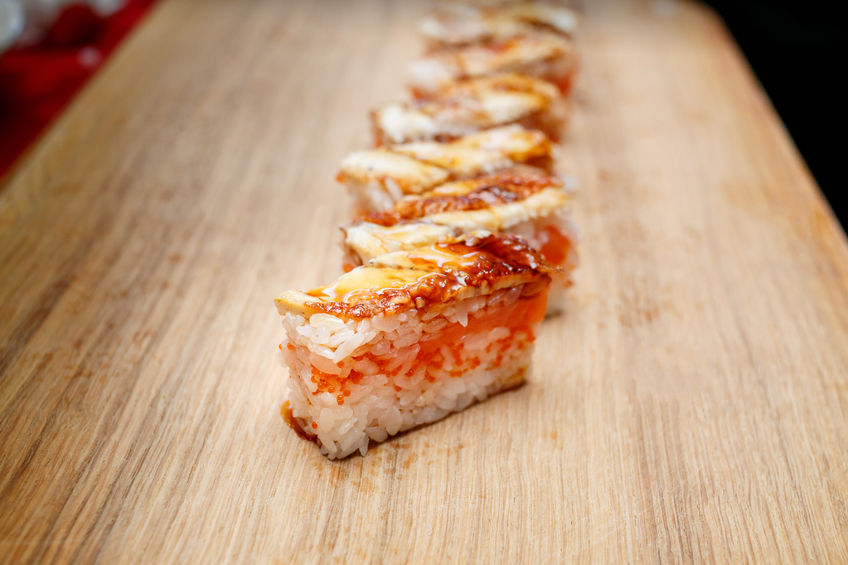 Oshizushi (pressed sushi), also known as hakozushi (boxed sushi), is a strikingly shaped style of sushi originating in Osaka. This variety is made by pressing ingredients into an “oshiwaku” rectangular box, then layering it with toppings and cutting the sushi into neat angular shapes like rectangles, triangle or small squares. The toppings include fish like mackerel or gizzard shad, and may also be decoratively layered with edible leaves like bamboo. Toppings may be placed in different arrangements, such as diagonally or with a whole fish from end to end, and this unique display makes oshizushi a popular choice for bento boxes and gifts. 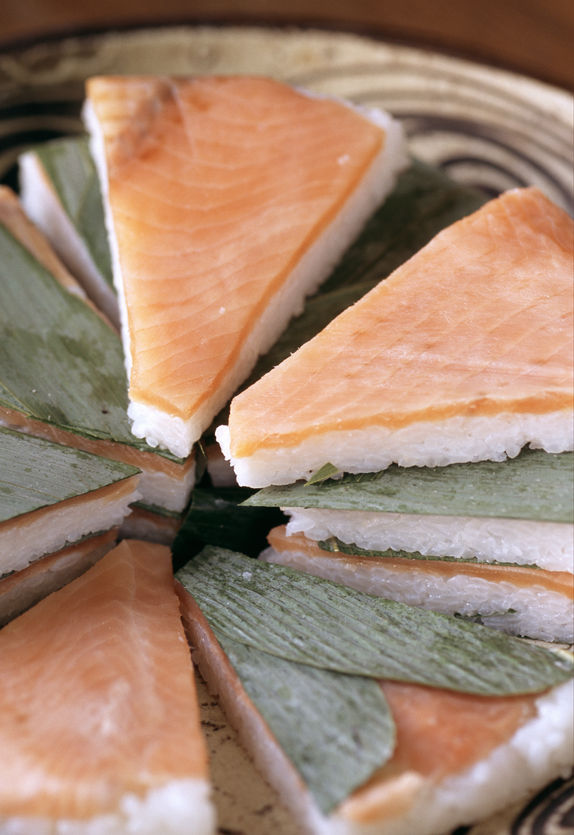 In Japanese, “sasa” is a bamboo leaf, and sasazushi is sushi consisting of rice and toppings wrapped in a bamboo leaf. Sasazushi is thought to have come from the Nagano prefecture during the Warring States period (1467–1573), and differing accounts say that its origin was either because food was served on bamboo leaves, or because Nagano locals were looking for a dish to impress the visiting samurai warlord of the time, Uesugi Kenshin. Toppings include a wide range of wild vegetables such as mugwort and bamboo shoots, walnuts, mushrooms, miso, shredded omelet and salmon. 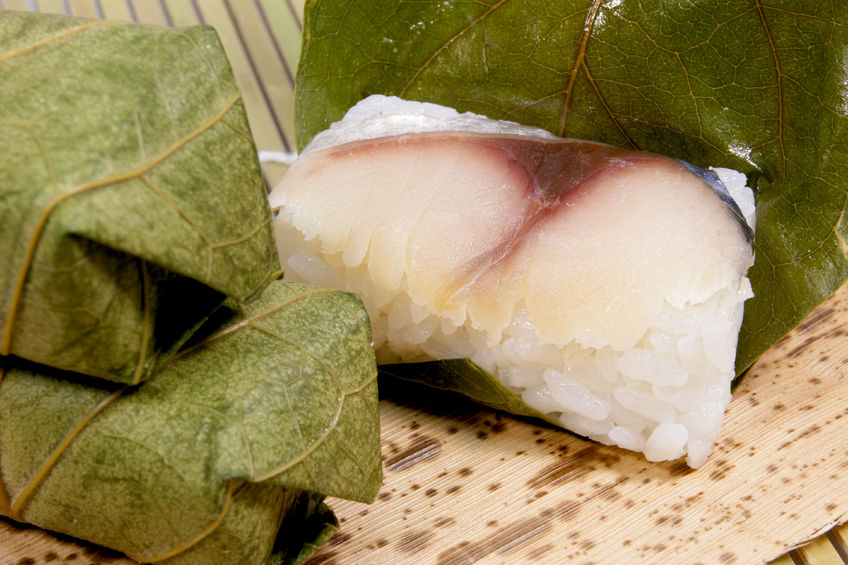 Another type of pressed, leaf-wrapped sushi is kakinoha-zushi, which comes from the Nara region of western Japan and dates to the Edo period. This version is wrapped in a persimmon (kaki) leaf. As Nara is a landlocked area, fresh seafood was often wrapped in persimmon leaves during transportation before the days of refrigeration; not only did the leaf preserve the fish with its antibacterial properties, it imparted a delicate aroma. Kakinoha-zushi is most commonly made by placing salmon or mackerel on top of the rice, but it can also feature other ingredients like prawn or eel. It’s a popular omiyage (souvenir) for visitors to the region, and is available at local department stores and train stations. 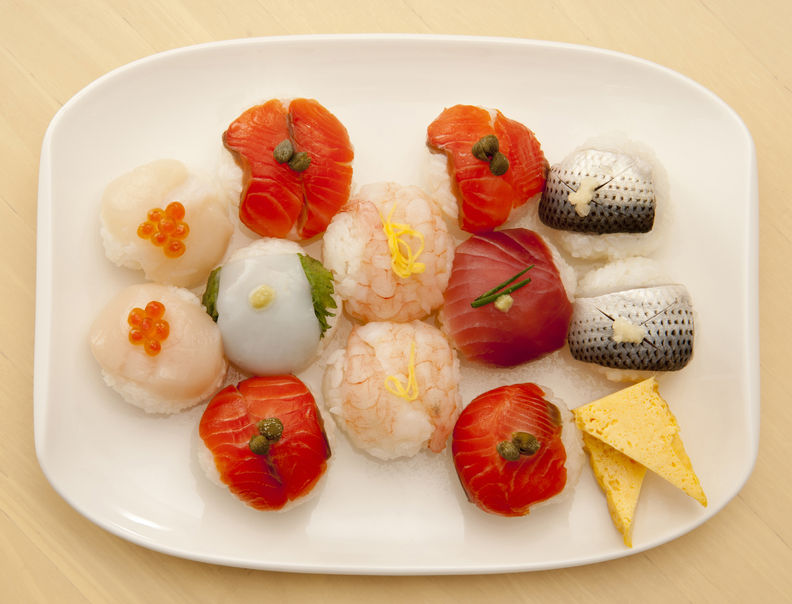 Temari is a less known variety of sushi overseas, and is also not as common to find in Japan, although it’s a popular style of sushi to make at home given its simplicity in form. It’s made with a small round ball of pressed rice topped with a thin layer of fish or other ingredients, which is fitting since the name comes from the traditional Japanese embroidered ball, temari, meaning “hand ball.” Often colorful and decorative, it’s a popular food for parties and picnics, and is often made for the traditional girl’s day celebration known as Hinamatsuri. If making temari for a picnic, it’s best to used cured or cooked seafood rather than raw sashimi. 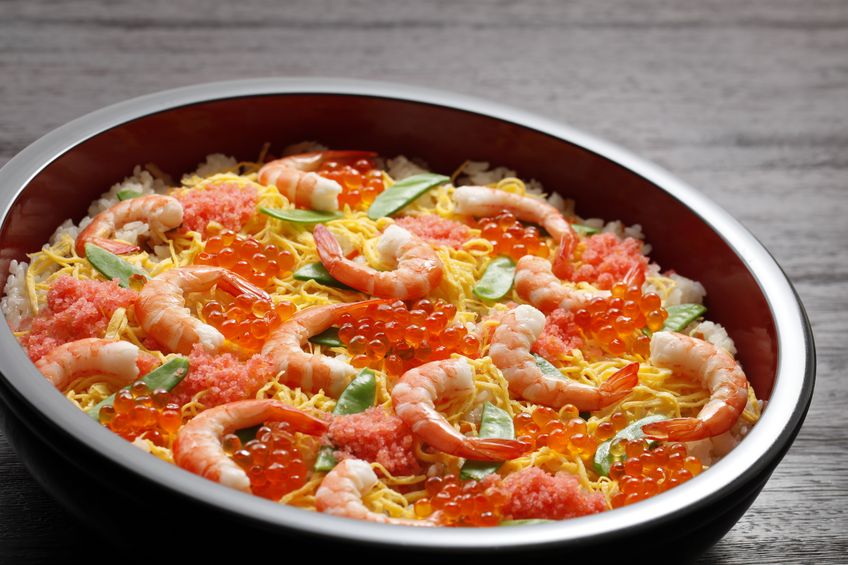 Chirashizushi, translated as “scattered sushi,” is a bowl of rice topped with a variety of ingredients, with popular toppings including pieces of salmon, squid, cucumber, shredded omelet, and boiled prawns. It’s similar to a kaisendon (Japanese rice bowl topped with a large amount of seafood), with the main difference being that chirashizushi uses vinegared sushi rice whereas kaisendon uses plain steamed white rice. You can easily find chirashizushi throughout Japan as it’s widely available in convenience stores, supermarkets and department store food courts. It’s often included as a bento box feature, or enjoyed as a stand-alone meal, given its wide variety of ingredients. Its decorative, bejeweled appearance makes it popular to serve at celebratory occasions. 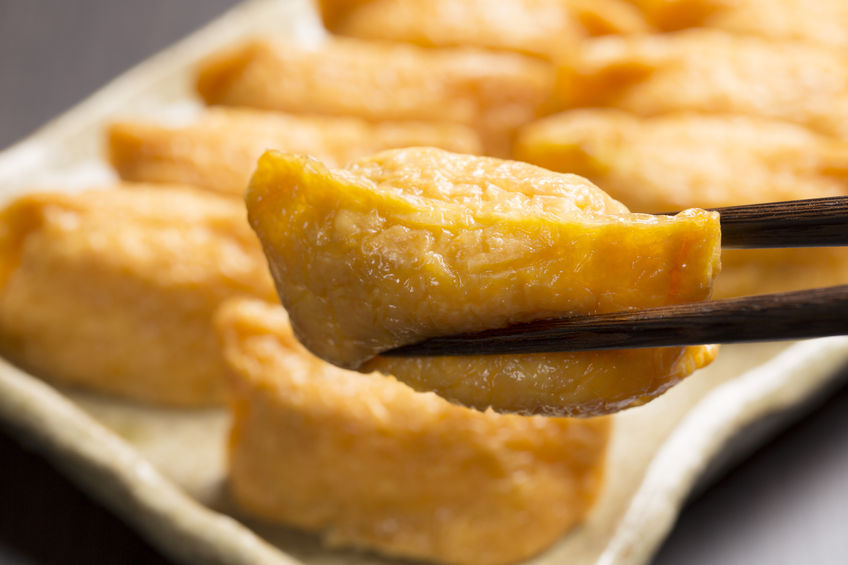 Inari-zushi is quite different from the other varieties mentioned above, since in its most common form it doesn’t contain any fish and is quite sweet in flavor. Inari is a pouch-like piece of aburaage(deep-fried tofu) that has been simmered in a seasoning of mirin, soy sauce, dashi and sugar. It’s named after the Shinto god, Inari, who is said to have had a fondness for tofu. The seasoned inari pouch is most commonly filled with vinegared sushi rice to create a sweet, slightly sour, juicy dish. However, inari-zushi can also be filled with rice mixed with other ingredients, or rice topped with a range of ingredients like mushrooms, squid, boiled prawns, chives or shredded omelet. The versatility, ease of making, and portability of inari-zushi makes it a popular item for bento as well as finger food for picnics and parties.