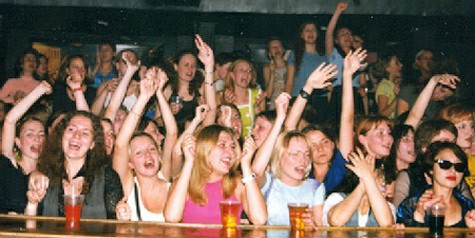 Sex, drugs, and rock’n’roll. Rock stars promote it, but only one bar truly epitomised the hedonistic lifestyle adored by so many. Bullets in the walls, hundreds of bar fights, and with a reputation for female customers dancing on bar tops, the Hungry Duck earned its infamous standing in history. But what brought the downfall of Moscow’s most infamous bar?

The Hungry Duck is now legend. The widely acclaimed bar from the late 90’s was a haven for irrepressible frivolity of youth. Wild parties, brazen strippers, and dancing on counter tops were all part of the daily routine. Perhaps strangest of all about this venue is the owner and location. At odds with the Russia we all know today, the raunchy bar opened in Pushechnaya Street in Moscow in 1995, and yet the manager who presided over the bar’s scandalous image was in fact, Canadian.

Hailing from in Halifax, Nova Scotia, Doug Steele would be the notorious foreigner to leave a lasting mark on Moscow’s party scene. In 1993, with a group of fellow Canadians visiting Moscow, they debated, as drunken men are apt to do, about opening their own bar. Ignorant about the resounding effects it would soon leave on Moscow nightlife, the beginnings of the Hungry Duck were born.

After a disastrous first attempt, involving dangerous disagreements with a pair of Chechen brothers, Doug Steele managed the soon-to-be den of debauchery from 1996, which began originally, as a simple restaurant. 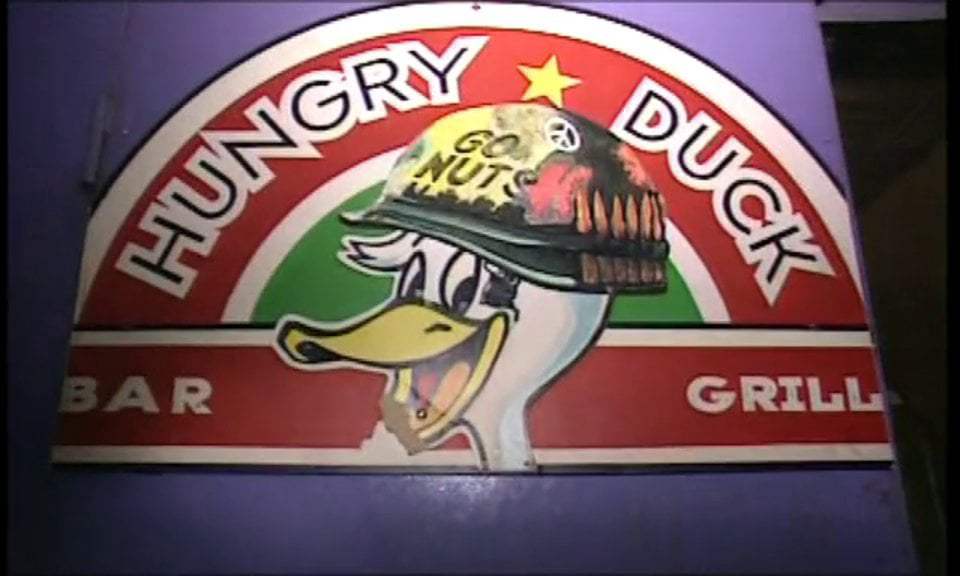 Doug Steele soon began the transformation into a Bar and Nightclub. Late hours, expatriates, and ladies’ nights were his focal points. As a venue with little space, customers began, tentatively at first, to dance on top of the bar. Perfect to give a show and receive free drinks, this then became a regular occurrence at the bar, now affectionately known as ‘The Duck’. In fact this became so common throughout the years, that ambulances were called over 40 times only to treat customers who injured themselves falling off the bar. The Hungry Duck became the place to be for expatriates and Russian youths. Before long, male strip shows were regular for ladies’ nights. Where men had to wait outside until late in the night, and ladies drank free drinks all evening.

Yet it wasn’t all fun and games, the Hungry Duck would earn it’s infamous reputation.

Customers and staff alike caused problems for the bar. Over the years the Duck suffered five bullets shot in the ceiling, with another three in the floor. The pub cycled through a grand total of 445 bar stools, and employed two full-time carpenters in an attempt to keep the furnishing in decent conditions after bar room brawls became a frequent occurrence. Over 2,000 passports were reported as lost during the years, and 133 members of staff were fired over accusations of theft.

The Duck’s infamy also resulted in personal repercussions for the owner himself. Doug Steele received multiple, violent death threats from individuals, and was faced with a kidnapping attempt that very nearly succeeded. After a group of Chechens invited Mr Steele into their car to ‘discuss business’, they allegedly attempted to drag him inside, and were only foiled by the valiant efforts of a Cuban bartender, allowing Mr Steele to escape from what he described as, ‘what probably would have been a one-way trip to a quiet forest on the outskirts of town.’

Speaking to someone on our team who was there in 1997 :

”If I google ‘The Hungry Duck’ today a rather genteel bistro in Ramsbottom, Lancashire appears. Which could not be further removed from the Hungry Duck I visited in Moscow in 1997. Genteel it was not. My friends and I used to visit three places every weekend; the Hungry Duck on Fridays, Chance on Saturdays and an Irish pub called Rosie’s on Sunday mornings to recover and swap tales over a big fry up. It was the standard expat circuit at the time. Rosie’s was pretty much like any other Irish pub in the world. Chance was a gay club in a former aquarium. A pretty standard gay club except that men swam in the tanks.. oh and it got blown up by a bomb soon after I left Moscow. The Hungry Duck was something else though. Very exceptional and you got a sense of being in a Zeitgeist place. Moscow’s Yeltsin era Cavern club or Studio 54. What hit you immediately was the concrete surrounds of the entrance and the metal detectors. This was a place that meant business where tough looking guys in leather jackets and flat caps jostled with big spending US corporate execs. It was a very bizarre mix of male strippers, mafia types, student expats and very beautiful women trying to entice the American oil execs with unlimited corporate credit cards. Then there was the Russian government official I saw once kissing a transvestite. And the Cuban circus performer I saw putting on a very ‘unusual’ show on the bar counter. I just remember the fun there and don’t recall seeing any weapons or real fisticuffs. It was like being back in the Weimar Republic. Had this been in New York in Studio 54 or at a hip nightclub in Paris in the 1960s, I probably would not have made it past the door. But as a student expat in 90s Russia, I was in quite a rare demographic as a young westerner so I was let in. The drink prices were actually quite cheap relatively too. And because I was at the bottom of the pecking order, I was left well alone by the Mafia to just dance, drink and have a good time! I will be visiting Ramsbottom later this year and hope to pop in to toast the Hungry Duck – old and new…oh, and I promise if I do visit not to dance on the tables and shoot a Kalashnikov at the specials board! ”

In the end, the bar’s downfall would not be due to the Russian Mafia, but rather to a wave of backlash from the prominent, puritanical elite, and their federal agencies. After government inspections of all Moscow nightlife, investigators were scandalised as they alleged they saw young women vigorously performing sex acts on a Nigerian male stripper named ‘Dillon’, while the Soviet National Anthem played in the background.

Subsequently, the Duck became the most vilified club in Moscow. That bar was the talk of all the media, and the Duck itself was denounced on over 30 separate occasions in the State Duma – giving the Hungry Duck a unique legacy as the only bar ever denounced in a National Parliament!

With pressure from an ex-ballerina by the name of Olga Lepeshinskaya, a board member of the directorate of the building where the Hungry Duck resided, a full-scale attempt to shut down the bar began. Building inspectors, fire marshals, and police crackdowns – there was no end to the resources thrown against the establishment. Suddenly every agency in Russia was out to shut down the entertainment in the bar under fear that the Hungry Duck was ‘corrupting Russia’s youth’.

The bar fought back. When four City Duma reps came calling, the manager simply offered them drink after drink, and they ended up partying the night away with other customers – the atmosphere of the Hungry Duck was infectious, however, not every challenge could be overcome by supplying alcohol.

Economic Crime Police raided and briefly closed the bar, with it re-opening soon after. Subsequently, the same Government Body then confiscated all the files on the bar. Health Inspectors were called out and made outlandish demands about the hygiene. Eventually over 256 criminal cases were created by police officers looking to help close down the venue, and 164 complaints were made against the Hungry Duck within a 3 month period!

Police raids almost became a regular part of the weekly schedule for the Hungry Duck during the late 1990’s. Within two months, two of the largest police raids occurred in the Hungry Duck. The first one involved three busloads of armed police and paramilitary forces, from every department within Russian bureaucracy. 52 police officers being enlisted just to raid the single bar in one night. The second raid came a month later, when 79 customers were arrested under suspicion of narcotics. The large number of arrests was due to a Russian law allowing police to detain any individual who appeared under the influence of drugs. All 79 customers apprehended were subsequently released without charge, but the governmental pressure took a toll on the business.

Eventually things became too hot to handle. Immigration services were being contacted to revoke Doug Steele’s visa, the Moscow City Prosecutor charged the Hungry Duck with ‘Violating the Morality of Russian Youth’ . An archaic law that used to read ‘Soviet’ rather than ‘Russian’’, but it succeeded nevertheless.

Despite Doug Steele’s attempts to open the Hungry Duck at a venue elsewhere, his hopes were shot down. With the venue so vehemently vilified in government and the media, no one was willing to risk it.

So the coming of the new millennium washed away the unbridled frivolity of the Hungry Duck. This venue was truly one-of-a-kind. Only in Yeltsin-era Moscow, with youths throwing off the oppressive yoke of conservatism, was such a feat possible and the mayhem and parties that occurred there can only live on now in the memories of ex-customers.