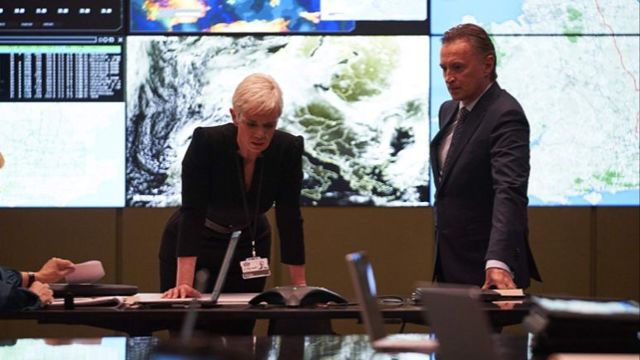 Fresh from fighting aliens in the recent BBC adaptation of War of the Worlds, Robert Carlyle takes on a new threat from the skies above in this new Sky One series – a geomagnetic storm which threatens the UK’s electricity supply.

Ben Richards’ drama is based on the Carrington Event, a solar storm in 1859 which resulted in burnt out telegraph systems across America and Europe. Cobra asks what would happen if such an event happened today, supposing that a geomagnetic energy could knock out the National Grid, shut down the internet, disrupt satellite systems and bring down mobile networks.

The six part series starts well – tension quickly builds as the PM’s team gathers in Cabinet Office Briefing Room A (hence the title): “We’ll have half an hour to know if it just fuses a few kettles or sends us back to the Stone Age.” 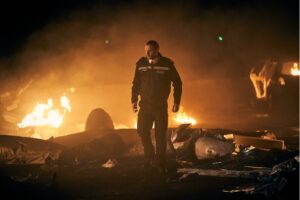 When it becomes clear that the scenario is very much worst-case, Sutherland and his chief of staff Anna Marshall (Victoria Hamilton) battle as much with their team and the odious, scheming Home Secretary (David Haig), as they do with the consequences of the solar storm. Northumbrian Police Chief Collier played by the excellent Steven Cree not only has to deal with a plane crash on the A1 but also a prison riot and mass civil disobedience. Here the series scored well with some memorable disaster scenes and fantastic visual effects.

The initial momentum of the show was quickly lost, however, with storylines going off in too many directions; the drug death, the divorce, the ‘freckles’ incident served only to distract from the central storyline, and too many subplots were left in limbo.

There was a big opportunity missed here to explore the cut and thrust of the decision making process in an emergency scenario.

The key decision the Cobra team had to make; which one of four regions would miss out on the three replacement electricity transformers, was reduced to a brief comedic interlude about Wales. No analysis about population sizes of the regions, gas vs electricity users or civil planning. No debate. Just a decision that it should be Northumbria. Which includes the massive urban centre of Newcastle. A city that Sutherland then decides to seal off with the army despite the fact they are running out of water and basic supplies. Pop over to stay at your relatives in Yorkshire where everyone seems to be carrying on with life as normal? Nope – you will be shot at an army checkpoint!

This lack of realism made it difficult to buy into the drama. No complaints on the quality of the acting or the technical production. But if the show does return for a second series, it should ditch the whining kids, get a believable Home Secretary, and scale back to concentrate on the true star of the drama – the Cobra Room itself.