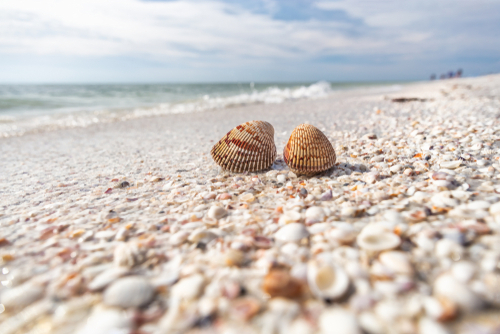 Shell-lovers from all over the world make pilgrimages to Sanibel Island, which is considered one of the best shelling spots in the world. Sanibel’s beaches, protected by a broad underwater shelf perfect for gently receiving deliveries from shell-laden currents, are carpeted with tiny, perfect pastel coquinas and false angel wings. Collecting them has become a favourite pastime for many visitors. In fact, so many people go shelling when visiting the island that the bent-at-the-waist stance one takes when bending over to retrieve a seashell has been dubbed the “Sanibel Stoop.”

Writer and pioneering aviator Anne Morrow Lindbergh said: “One cannot collect all the beautiful shells on the beach!”

Sounds obvious when you think about it.

But she may have been thinking about one particularly idyllic island off the coast of Florida which doesn’t just have shells ON the beach – the shells ARE the beach!

The sublime Sanibel island is world renowned among ‘shellers’ for its incredibly vast array of more than 400 different amazing varieties of seashells. 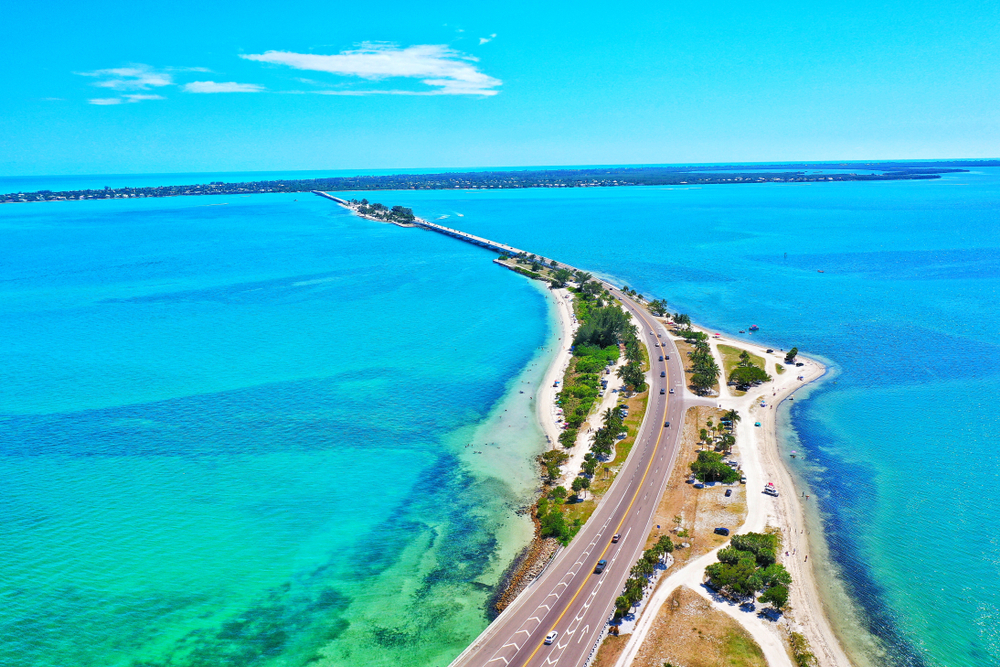 Each day shells are washed up onto the shores of the many beaches of Sanibel, and its close neighbour Captiva, from the tides of the Caribbean and the Gulf of Mexico.

As a result, the area has become a real paradise for ‘shellers’ – the term given to those who enjoy walking the beaches and looking for seashells to inspect and collect.

According to historians and the island’s Chamber of Commerce, Sanibel and Captiva began life as a huge area of sediment shaped by centuries of terrific storm activity.

Both Sanibel and Captiva rose from the ocean as one island some 6,000 years ago. They played host to their first native inhabitants, the Calusa Indians, around 3,500 years later. Disease brought by European sailors caused the deaths of the native Indian populations and the islands suffered from the effects of decades of piracy and civil war. It wasn’t until 1845 that Sanibel and Captiva were admitted to the Union shortly after the area was declared safe to inhabit. In 1870 the Lighthouse was granted reservation status and it lit the skies for the first time in 1884.

It has been their simple geography and ‘boomerang’ shaped shorelines that have made Sanibel and Captiva two of nature’s most successful seashell entrapments over the last few thousand years.

And there really are some rich pickings for shellers! There so many shells on and in the islands that residents regularly dig them up when doing their own gardening!

According to Tropixtraveler.com, the top five sites for ‘shellers’ to practise their Sanibel ‘shkills’ are:

And if that’s not enough, visitors can take the opportunity to brush up on their Sanibel ‘stooping’ techniques too. The term ‘stoop’ or ‘stooping’ refers to the action of bending down to collect a shell from the beaches of Sanibel –  the Washington Post newspaper also described it as the Sanibel “bent-at-the-waist posture”. 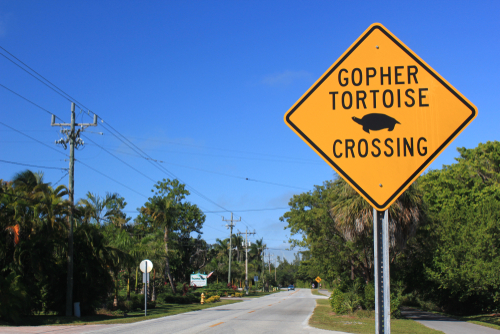 In a bid to ensure wildlife on and around the islands are protected from over-zealous shellers and stoopers, local officials enforce an eco-behaviour code. One of the most stringently enforced regulations, introduced by the Florida Fish and Wildlife Conservation Commission in March 2002, was the banning of the collection of ‘live’ shells from the beaches of this heavenly, holiday haven. The ban came into force as a result of decades of ‘live’ shell creatures being taken away by inquisitive holidaymakers and collectors.

Sanibel is home to the Bailey-Matthews National Shell Museum, which is the only museum in the United States which claims to be “devoted entirely to shells and molluscs”.  It boasts “more than 30 engaging exhibits of stunning shells, showcasing some of the largest and rarest shell specimens in the world, including the goliath conch, lightning whelk and Atlantic trumpet triton, as well as common Southwest Florida shell and fossil shells”.

According to “The Beaches Fort Myers and Sanibel” organisation, shellers are especially advised to look out for the Sanibel Six when ‘stooping’ or, indeed, when ‘crouching’ on Captiva.

Apparently, the best time to go shell hunting is after high winds and storms when more shells are brought to the island by more fearsome waves.

Collecting at lower tide, of course, also means that there is more sand and a bigger expanse of beach on which to comb for those special, elusive shells.

The Sanibel Six  seashells  are: the low tide dwelling Lightning Whelk; the complex and difficult to find Lace Murex; the orange dotted and dashed Alphabet Cone; the Florida Fighting Conch which can be ‘aggressive’ if alive when picked up; the Lettered Olive, which is the ‘shiniest shell’ on Sanibel; and the four-inch-long Banded Tulip.

If visitors can drag themselves away from the top shelling areas of Sanibel and Captiva, they can enjoy the sun, sea and sand in average August Florida temperatures of between 71 and 92 degrees Fahrenheit. 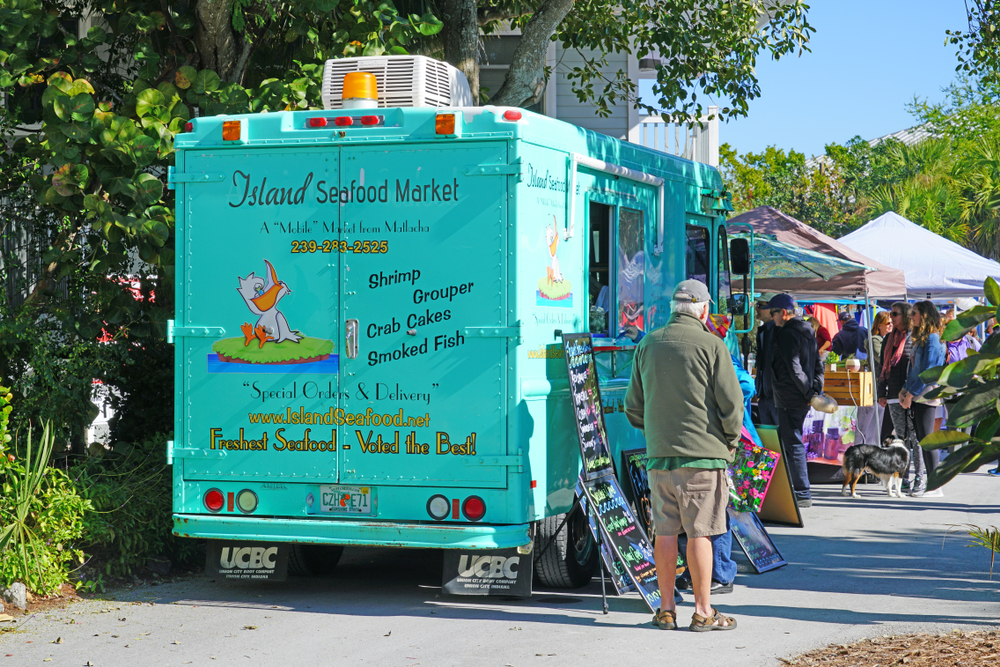 In addition, they can compare their experiences with those of former famous holidaymakers and lovers of this charming, American island holiday idyl.

As mentioned earlier, Anne Morrow Lindbergh and her husband, the famous aviator Charles Lindbergh, would often holiday on the southwest coast of Florida and on Sanibel’s sister island, Captiva in the late 1930s and early 1940s. Their stays are said to have enthused Anne to writer her 3 million bestselling book, Gift from the Sea.

Other famous faces rumoured to have graced the town’s sights and eateries include musician Eric Clapton, actor Johnny Depp and even American politician Mike Pence.

Folk rock supergroup Crosby, Stills, Nash and Young raised the islands’ profiles when they sang about the “Starlit nights in paradise on the Isle of Sanibel”. Some parts of Sanibel have been used for scenes in well-known movies including director Georgeo Romero’s Day of the Dead (1985) and the majestic Sanibel Causeway in a handful of commercial advertisements including promotions for the 2014 E-Class Coupe.

For ordinary visitors, the causeway is a fantastic place for a gentle stroll. But be warned that, if winds reach speeds of more than 40mph, the Causeway will close.

If you want to enjoy the wealth of beauty and scenery on Sanibel, Captiva and nearby Fort Myers and the Florida coast, you can do the ‘stoop’ from the comfort of your own sofa!  Click on one of the many Sanibel beach and town cams made available by the local Chamber of Commerce official website to see what you are missing.