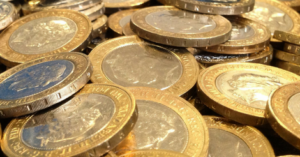 If you have a pocket full of change, you might want to empty it out, as you could be in for some very good news! That’s according to the money experts at ChangeChecker, who have revealed a fascinating Scarcity Index, detailing the 37 £2 coins experts believe could be worth a mint one day – because of their low circulation numbers. The stories behind the coin designs are fascinating too – the stories behind each of the to rarest £2 coins are detailed below.

The rarest of them all: The 2002 Commonwealth games Northern Ireland £2 coin is thought to be the most sought after in circulation. It is followed by Wales, England and Scotland, and is already worth up to £72 on eBay.

Commonwealth Games England: In total, 2.5 million Commonwealth Games coins were issued, but the mintages for each of the four designs range from 485,500 to 771,500. While they’re all classed as ‘rare’ some aren’t worth quite as much just yet (around £8) – although experts say this will jump in the future.

Commonwealth Games Scotland: . At first glance, you might struggle to spot the difference between the four Commonwealth coins. They all feature the same running athlete trailing a banner behind. But each has a different cameo, representing each of the four constituent parts of the United Kingdom.

Olympic Centenary £2 coin: The modern Olympic Games started in Athens in 1896 and have since become the greatest sporting event in the world. The games of 1908 were originally scheduled to be held in Rome, but due to the eruption of Mount Vesuvius, they were re-located to London, hence this iconic coin.

King James Bible £2 coin: First published in 1611, the King James Bible is an English translation of the Christian Bible for the Church of England. It is widely regarded as one of the most important books ever published in the English language for its influence on the nature of protestant worship as well as English culture. The reverse design of this £2 coin features the first words from the book of John – ‘In the beginning was the Word’.

Commonwealth Games Wales: In total, 2.5 million Commonwealth Games coins were issued, but the mintages for each of the four designs range from 485,500 to 771,500. While they’re all classed as ‘rare’ some aren’t worth quite as much just yet (around £8) – although experts say this will jump in the future.

Mary Rose: The Mary Rose was a ship built and completed at Portsmouth Harbour in 1511 for Henry VIII and named after his favourite sister, Mary Tudor. It was the pride and joy of England’s Royal Navy but in 1545 it tragically sank with the loss of all 35 men. The reverse design of this commemorative £2 coin features a depiction of the ship by John Bergdahl.

London 2012 Handover: At the end of each Olympic Games, the next host city of the Games is celebrated with a flag handover ceremony. On 12 August at the London 2012 Closing Ceremony, the mayor of Rio de Janeiro was handed the Olympic flag by the president of the International Olympic Committee, Jacques Rogge. This £2 coin is synonymous with that exact moment.

Olympic Handover £2 coin: The end of the Beijing 2008 Olympic Games marked the first major event for the London 2012, with the official handover of the Games to the next host city. The Olympic Flag was handed over from the Mayor of Beijing to the Mayor of London, followed by a short performance inviting the world to London for the 2012 Games.