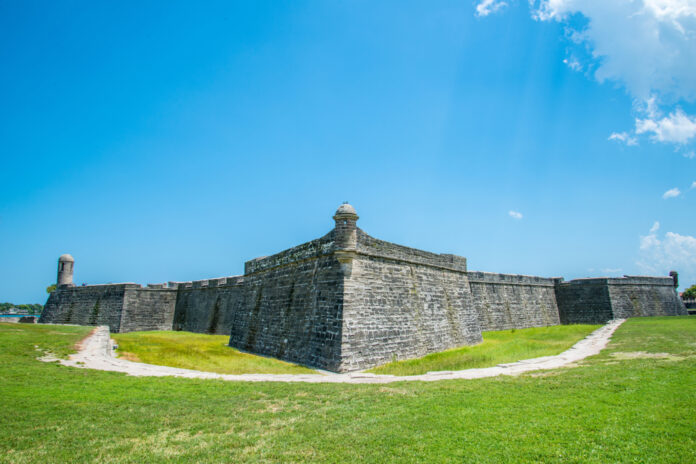 Undefeated and unbreakable, Castillo de San Marcos has withstood assaults, changed ownership six times, and been controlled by four governments but, due to a fascinating phenomenon, it has never once has it fallen to outside forces.

Florida in the 18th century was an area rife with war. Between the British Colonies, the Spanish Empire, and the British Empire, the Americas were involved in a relentless tug-of-war that spanned decades. The relentless charging of hooves, the marching cadence of soldiers, and the explosions of cannon fire were common throughout the land. Battles and sieges were bloody affairs, the smell of gunpowder and screams of soldiers – the litany of war. However, while many fortresses fell to their enemies, the Castillo de San Marcos has remained stalwart throughout the ages.

After the destruction of the original wooden fort by English Privateer Robert Searles, the core of new fortress, designed by Spanish Engineer Ignacio Daza in 1672, took 23 years to complete, where it proudly remains standing to this day. Whether by luck or clever design, the materials employed in construction provided an insurmountable defence against attackers.

In 1702 the secret of the fort became apparent, much to the dismay of the British forces besieging the city. While most Castles are susceptible to cannon fire, and the walls able to be destroyed given enough time, the Castillo de San Marcos devoured every cannonball sent its way. No cracks appeared, no weaknesses found, the surrounding walls ate cannonball after cannonball sent against them. This incredible phenomenon was due to one factor – coquina. 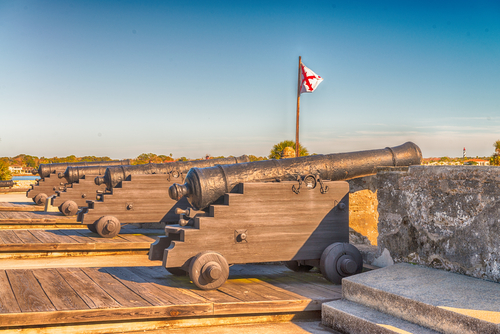 Coquina is a particular kind of sedimentary rock. Formed from layer after layer of shells from dead marine organisms, and subjected to years of extreme pressure, this type of rock was used in the construction of the entire fort. This provided the legendary defensive capability that has ensured the fort’s impregnable existence through the centuries.

Firing heavy iron balls at hundreds of feet per second has a severely detrimental effect on walls carved from ordinary rock. The stress of impact smashes the stone open and causes deep, long cracks within the walls, eventually leading to catastrophic structural damage and destroying the integrity of the defences. With walls built from coquina however, the Castillo de San Marcos did something very different.

With the use of coquina within the walls, they did not receive the impact immediately as most other castles would, and instead, allowed the cannonball to penetrate the outer layers, absorbing the kinetic energy at a slower rate, and bringing the cannonball to a slow rest. An Englishman aptly described the effect of the walls as ‘will not splinter but will give way to cannon ball as though you would stick a knife into cheese.’

This fascinating construction of the Castillo de San Marcos has allowed it to withstand siege after siege and remain impregnable throughout the centuries. It has held its own against every army hurled against its walls, and has only ever changed hands peacefully. Originally owned by the Kingdom of Spain, it came under control of the Kingdom of Great Britain, and finally, to this date, has been controlled by the United States of America, barring a four-year period, where it was under official control of the Confederated States of America.

Eventually the United States of America passed control of the Fort to the National Trust, where it remains to this day, a breathtaking reminder of the history of Florida, and of battles beyond memory. 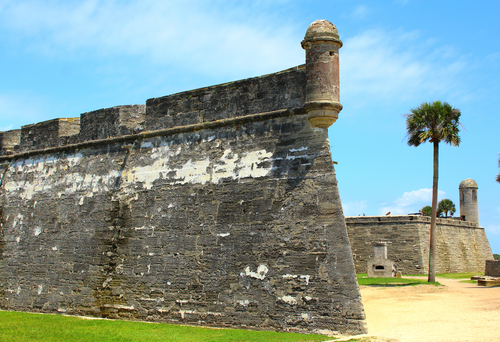 What does it provide today?

The Castillo de San Marcos is a fantastic historical monument and attracts thousands of visitors every year, as ‘the best-preserved example of a Spanish colonial fortification in the continental United States’. Among the visitors are a great number of historical and military enthusiasts from all corners of the globe and, with 300 days of sunshine every year, the sights are beautiful to behold.

Covid-19 has unfortunately prevented any visitors in person as of March 2020, but this is no barrier for those who truly wish to see the sights. Through their official website, there is an in-depth virtual tour, providing the means for anyone with an internet connection to explore the secret history of the Fort. Through your computer screen you can take a walk from the City Gates, to the Seawall of the oldest masonry fort. You can delve through the halls and corridors within, gaze out from the gun deck, and view the landscape that the defenders would have looked out upon so many centuries ago.

The virtual tour also allows in-depth analysis of artefacts and objects throughout the fort. Being both Virtual Reality and Augmented Reality compatible, you can dissect the Spanish Bronze Cannons and Mortars, to truly get to grips with the intricacies of the technologies available at the time.

The Castillo de San Marcos stands to this day as a living, unbroken symbol of North American history. With the sights it has seen, the pressure it has felt, it speaks to the legacy of ages. Far from being simply a political, architectural, and historical symbol, it now provides younger generations with incredible learning opportunities.

Long has it stood, and long may it continue to teach our future generations of the past it has endured.