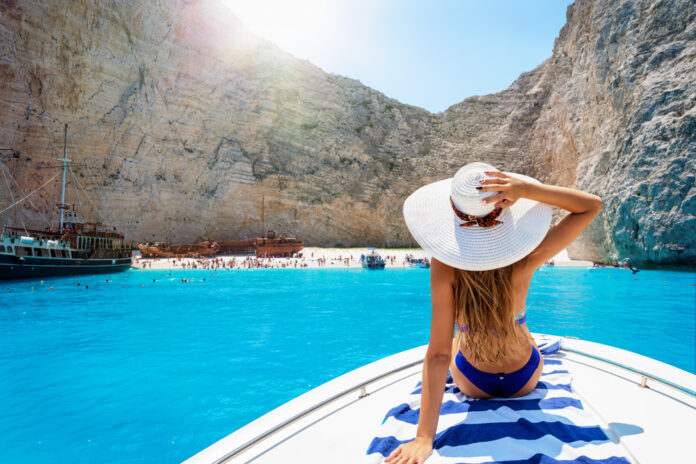 This ordinary ship from the Clyde has had an extraordinary life – from rescuing survivors at Dunkirk in its early years to its final resting place where it now features as the backdrop to the most photographed beach in Europe. This is the story of the MV Panagiotis.

MV Panagiotis – From the Clyde to Zakynthos

Constructed on the Clyde in 1937, utilised to evacuate Dunkirk survivors during World War Two, and shipwrecked on the Greek island of Zakynthos in 1980, the incongruous MV Panagiotis is considered to be amongst the most visited shipwrecks in the world. With its rusted exterior, explorable interior, and its tropical backdrop of Navagio Bay, the Panagiotis certainly makes for an interesting Instagram post – but the ship’s long, colourful, and, at times, patchy history makes this abandoned vessel all the more fascinating. Read on as we marvel at the MV Panagiotis’ storied past, from the Clyde to the Ionian Sea.

Starting life in quite the opposite from the climate in which it basks in today, the MV Panagiotis was constructed on the Clyde in Yard 341 in Bowling, Dunbartonshire, by one of the eras most prolific shipbuilding companies, Scott and Sons, who built over 450 vessels, many of which akin to the MV Panagiotis, between the years 1851 and 1979.

The finishing touches to the vessel were carried out by British Auxiliaries Ltd, who added a diesel engine which operated at an impressive 532 BHP.

The MV Panagiotis was built for coaster usage and was used as such by original owners of the vessel, J. & A. Gardner and Co in 1937 – until the outbreak of World War II. 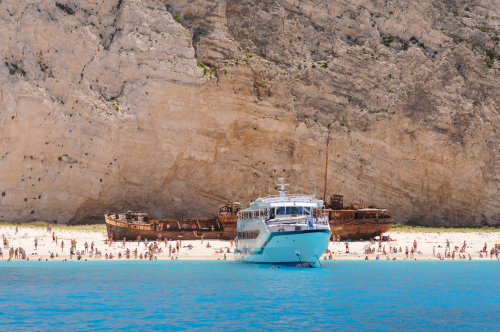 After serving for a short while as a cargo ship, the MV Panagiotis’ gross register tonnage of 452 was utilised for more humanitarian purposes at the advent of World War Two – as one of the many British ships who banded together to assist with the evacuation of Dunkirk, from the 26th of May to 4th of June 1940.

Unfortunately, little information survives regarding how many trips to Dunkirk the Panagiotis made, or how many soldiers it saved – all that is known is that it answered Churchill’s call for maritime assistance.

Amazingly, the vessel’s most recent history remains to be its most dubious. The ship passed through a plethora of owners in the immediate decades after the war, before falling into Greek ownership in the 1960s. Of the ownerships recorded, the vessel is known to have been bought in 1964 by M. Gigilinis and S. Kakassinas, both from Thessaloniki, who renamed the ship ‘Meropi’; it was then, in 1966, passed on to N.S Kalfas, who renamed it ‘Charis’; and was finally bought by P. Lisikatos & Company in 1975, who gave the vessel its final name, ‘Panagiotis’.

The role the vessel played while it was owned by P.Lisikatos & Co, prior to being shipwrecked, has been greatly mythologized over time. The mythologized, and far more exciting, version of events involves pirates, the Italian mafia, and smuggled cigarettes. 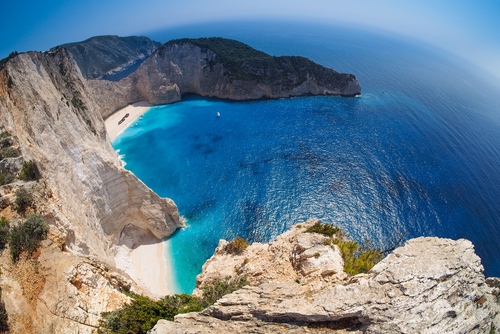 The story goes that the Panagiotis wound up spending her last years on the sea as a pirate ship, ordered by the Italian mafia, which smuggled cigarettes between Turkey and Italy. Greek authorities allegedly caught wind of this skullduggery and sent out fleets of the Greek Navy in order to intervene and curb this illegal trade. While attempting to circumvent this pursuit, the Panagiotis is said to have sailed into a storm and drifted towards Zakynthos, where it became shipwrecked on its western coast.

Another, more elaborate, yarn that is frequently spun by Zakynthos locals claims that the boat was carrying not only cigarettes and wine but also human prisoners to boot. In this version of events, the storm is often omitted, and it is claimed, instead, that the Panagiotis simply ran out of fuel and was gradually swept ashore.

However, these fables, as exciting as they are, were rendered inaccurate as of 2016, when the former and last captain of the Panagiotis, Captain Charalambos Kompothekras-Kotsoris, came forward with the truth. He explained that the vessel was never used for pirating activity and was in fact lawfully transporting goods between Kefalonia and the Albanian port city of Durres at the time of the shipwrecking. The storm part of the pirating yarn remains to be the only factual part, as Kompothekras-Kotsoris claims that the vessel was beached on the 2nd of October 1980 on account of a storm.

For those unsatisfied with the blandness of this version of events in comparison to the fables involving pirates, it is worth noting that the Panagiotis was later plundered for its legitimate goods, which resulted in the arrest of nearly 30 Zakynthos locals, which makes captain Komphothekras-Kotsoris’ account slightly more thrilling. 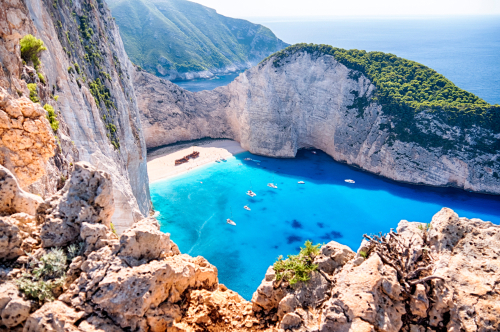 The Panagiotis, which has now lain abandoned for over 40 years, has become an integral part of Zakynthos’ identity, so much so that the beach in which it lies has been renamed to Navagio, which is Greek for ‘Shipwreck’, and is sometimes even referred to as ‘smugglers cove’.

The ship has prominently featured on Greek postcards since it was originally beached and continues to attract waves of tourists every year. It is, today, a heavily instagrammed spot, having topped FlightNetwork’s 100 Best Beaches list in 2018, and being labelled as ‘the world’s most famous shipwreck’ by Culture Trip.

Given the beach’s positioning, the wreck itself cannot be reached on foot, meaning that visitors are required to take a 30-minute boat ride in order to reach it. However, this minor complication does not deter flocks of people visiting, as the trip is worth it not just for the wreck, but also to marvel at the white sands and marble cliffs, and swim in the island’s blue shores.

Navagio beach was used as a key setting in the Korean show ‘Descendants of the Sun’ which has further popularized the destination.

From shipwreck to most instagrammable beach in Europe

Originally feared to be an environmental issue, the MV Panagiotis has since been deemed safe to slowly erode on one of Greece’s most idyllic waterfronts. As incongruous as the Panagiotis is, the ship makes for a totally unique landmark, has inspired countless myths and legends, and connects Scotland to Greece in the most unusual of ways.