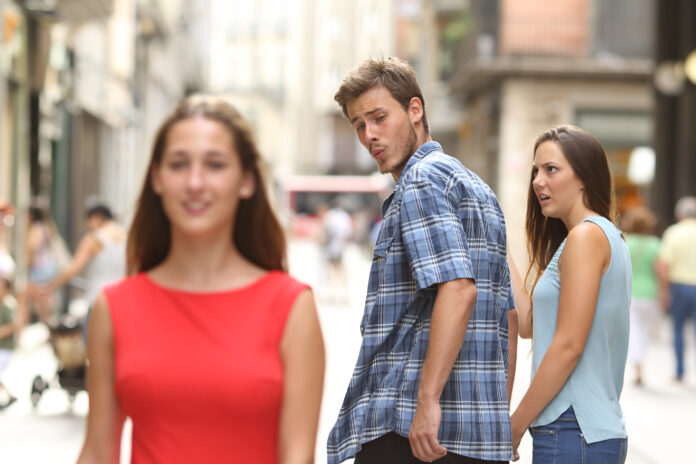 It is one of the most recognisable photos of the 21st century. Despite its success, the photographer has made little to no money from it . The incredible story behind the ‘distracted boyfriend’ photo.

Meme culture stands today as the zeitgeist of the gen-Z internet age and are essential in the way we share ideas, interests, and, most importantly, humour. At any given time, a multitude of zany and inventive image-based jokes can be found sprawled across Facebook, Twitter, Instagram and beyond; so much so that memes have developed into a vital marketing tool, and have enhanced the online presence of such brands as Gucci, Topshop, and McDonalds; while on the other hand, memes have come to prominence in political discourse and are used by politicians themselves, in order to, rather ingratiatingly, appeal to younger voters.

Partially the reason why memes have pervaded nearly every aspect of human consumption, discourse, and thinking lies in how simple they are to create; anyone with a phone, an internet connection, and a bit of creativity can contribute to the phenomenon. And even when creativity is lacking, there are always a selection of certain images or meme formats in fashion that will ensure likes and shares at given times.

One image that has maintained a particularly long period of meme-vogue was a simple stock photograph that came to be known as ‘the Distracted Boyfriend Meme’. Its enduring popularity begs the question of its background – who are the models, and who is the photographer?

What is the story behind the photo and who are the models in the shot?

The scene is fairly straight-forward: the altercation occurs between a couple as a third-party walks by; the boyfriend is distracted – and even swooning – at the passing brunette, while his girlfriend looks on in dismay. Its across-the-board popularity relies on how infidelity is depicted clearly in the image, and how easily that can be applied to anything where one thing is rejected for another; this can be made humours when the thing distracting the boyfriend is of a lesser quality than the thing he’s already got.

The image is the work of 45-year-old Catalonian photographer, Antonio Guillem, who creates promotional images for several companies throughout Spain, alongside maintaining his own stock images company. Guillem has frequently worked with the models featured in the ‘Distracted Boyfriend…’ picture and focuses his work on creating stock images that depict reactionary scenarios and everyday altercations.

“Disloyal man walking with his girlfriend and looking amazed at another seductive girl”, as it was originally entitled by Guillem, was part of a large project the artist undertook in 2015, in which he intended to produce a spectrum of images honing in on the idea of infidelity.

Due to privacy concerns, Guillem has, during interviews, refused to disclose the names of the the models that appear in the photo.

The shoot took place in Gerona, Catalonia, and, over a plethora of images, the full story of the ‘distracted boyfriend’ was depicted. One image conveyed an argument ensuing between the couple, presumably set after ‘Distracted Boyfriend…’ chronologically; another picture shows the three models getting along well, as if the issue from before had been resolved.

How it became a Meme

Like most stock image modelling, facial expressions are often the most vital part, hence why the models’ faces are often over-exaggerated – which make these images all the more meme-worthy.

Where the image was first used in a comical way is a contentious issue amongst meme historians, but the reputable source, Tumblr’s Meme Documentation page, claims the image was first used in January of 2017 on a Turkish Facebook Group for fans of prog rock – ‘Great Answers to Prog Enemies’ –  where the image was turned into a meme in order to make fun of Phil Collins’ post-Genesis career trajectory – with the boyfriend character labelled as Collins, the girlfriend as prog-rock, and the distraction as pop-rock.

The meme was picked up sharply by the English-speaking world and garnered 30,000 likes the first time it was shared on Instagram. The real breaking point came in August of 2017, when the template was used to show ‘the youth’ being distracted from ‘capitalism’ by ‘socialism’, which received 35,000 retweets and 100,000 likes. From this point, the template spread like wildfire across all social media platforms and, according to Know Your Meme’s editor, Adam Downer, the ‘Distracted Boyfriend’ meme kickstarted a whole new subgenre of meme known as ‘object labelling’.

The ‘Distracted Boyfriend’ was recycled prolifically in the following years, including by big companies such as Renault, and major publications such as the New York Times and the Guardian.

Has the meme’s fame brought Guillem any success?

Guillem only heard that his work had been transformed into a meme template from his models, who themselves only found out when ‘Distracted Boyfriend’ memes started to appear on their social media accounts. Guillem told the Guardian that he wasn’t even aware of what a meme was prior to his image going viral; that his own work was the first meme he had ever encountered.

Although Guillem is satisfied that his image has had such a cultural impact, the images popularity doesn’t necessarily translate to any real success in terms of financial gain or notoriety. Relative to Guillem’s other popular stock images, some of which reportedly sell up to 6,000 copies a year, the ‘Distracted Boyfriend’ original only sells on average 700 copies per annum. Despite the immense popularity of the image, those who are using ‘Distracted Boyfriend’ for meme purposes are of course not providing any sort of payment to the photographer.

This doesn’t seem to bother Guillem, however, who claims he’s too distracted by other projects to give the meme’s success much thought.

The meme’s zenith may be at an end, but it’s safe to say Guillem’s stock image will be an internet mainstay for years to come.

Editor’s note – We are happy to confirm we paid for our stock photo from Guillem!