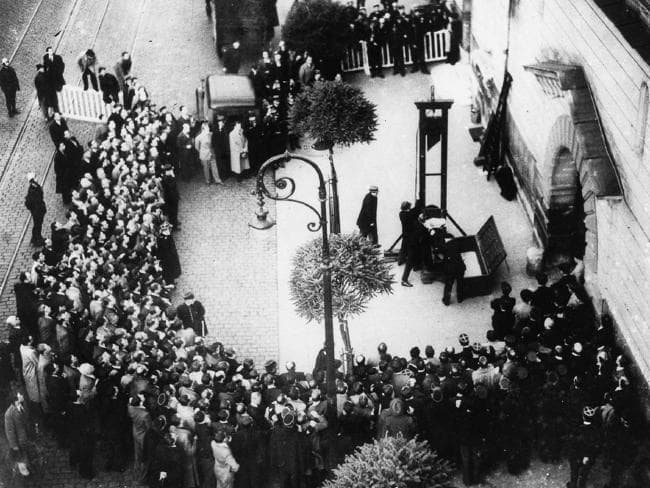 The date of France’s last ever public execution of a prisoner by guillotine will surprise you. The last ever prison execution even more so. This article contains subject-matter and historical footage some readers may find upsetting.

When conversations, books or films move towards medieval ages, it is only a matter of time before capital punishment and the guillotine move to the forefront. These notorious instruments of death may belong well in the past for people in many parts of the world but for the citizens of France, they were used much more recently than some may realise.

While the name “guillotine” came from France in the 1790s during the French Revolution, similar execution machines already existed in many other countries for centuries prior to this period. During the Middles Ages in Germany and Flanders a beheading device called a “planke” was used. The English also had a similar device which employed a sliding axe known as the Halifax Gibbet – this was recorded being used to behead thieves as far back as the late 1200s.

The French made guillotine was possibly inspired by two earlier machines: the Italian Renaissance era “mannaia” and the infamous “Scottish Maiden”, which from the 16th to 18th centuries claimed the lives of around 120 people. Despite the name guillotine originating around the French Revolution, evidence exists which shows primitive versions being used well before this time.

The invention of this deadly machine is credited to Dr Joseph-Ignace Guillotin who approached the French Government in late 1789. Despite being opposed to capital punishment, he proposed the guillotine as a more humane method of execution – it was very quick compared to the preferred method of sword or axe beheadings which were regularly botched. Dr Guillotin oversaw the development of the first prototype of his machine, which was designed by fellow French doctor Antione Louis and built by a German harpsichord maker named Tobias Schmidt.

In April 1792, the machine claimed its first victim, quickly earning the name “the Guillotine”, much to the horror of its inventor. Guillotin tried to distance himself from the device during the guillotine hysteria which developed in the 1790s and later in the 19th century his family unsuccessfully petitioned the French government to have the name of their ancestor’s deadly invention changed.

The guillotine is widely known as one of the most gruesome methods of execution in history. It has garnered many nicknames over the years: Madame la Guillotine, la Dame (the Lady), la Veuve (the Widow), le Rasoir National (the National Razor), and Louisette. The guillotine is also commonly called ‘the Terror’ of the French Revolution. Throughout its long history, this is a piece of equipment which continues to both horrify and fascinate us.

The final public execution using the guillotine took place on the morning of 17th June 1939. Eugen Weidmann, a career criminal, was its final victim in view of public eyes. Weidmann was arrested by police who tracked him (and two accomplices) down in connection with the kidnap, robbery and murder of several tourists in and around Paris. Weidmann did not take his arrest quietly, initially firing a pistol at the officers who arrived to detain him before they managed to wrestle him to the ground. After a sensational trial which received a lot of coverage, Weidmann and one of his partners in crime Roger Million were sentenced to death while their other accomplice Jean Blanc was sent to prison for 20 months.

On the day of his execution, Weidmann was marched out in front of the Prison Saint-Pierre. Along with the guillotine, a large raucous crowd also awaited him, whistling and yelling – one of the attendee’s that day was future film legend Christopher Lee who was only 17 years old at the time.

Once Weidmann was in place, Jules-Henri Desfourneaux (France’s chief executioner) let the blade fall without delay. Instead of solemnly observing the condemned man’s death, the crowd reacted wildly, rushing with handkerchiefs to dab up Weidmann’s blood as a souvenir for the day. The actions of the crowd were so appalling that President Albert Lebrun banned public executions completely, stating that rather than acting as a deterrent to crime as intended, they awakened people’s baser instincts. Despite the banning of it’s use in public, the guillotine was still used for private executions in France right up until 1977.

On 10th September 1977 at 4.40am, the guillotine claimed its last ever victim in France. Hamida Djandoubi was a Tunisian immigrant living in Marseille. He was sentenced to death following the torture and murder of his girlfriend. Her death was an act of revenge which followed her reporting him to the authorities for forcing her into prostitution. After a denied appeal, Djandoubi was taken to the top of the scaffold that morning and France’s chief executioner Marcel Chevalier dropped the blade for the last time in the country’s history.

The method of execution was already drawing heavy criticism from people opposed to capital punishment. Djandoubi’s execution only added fuel to the fire when a doctor in attendance confirmed that the body remained responsive for up to 30 seconds after decapitation. This was not the first instance of a victim remaining conscious after the act. It is reported that in 1905, Henri Languille looked at a witness in the crowd who called out his name.

Despite its opponents, the guillotine was kept as France’s national method of execution for another four years from Djandoubi’s death. After 189 years of use, the guillotine’s bloody reign officially came to an end when France abolished capital punishment in September 1981. Following the removal of the death penalty, President Francois Mitterrand signed a law on 9th October 1981 prohibiting the judicial system from using the guillotine for any current sentences. The sentences of six people on death row at the time the law was signed instead had their sentences commuted to life imprisonment.

Over its time in use, the guillotine claimed the lives of thousands of prisoners in France. In 1981, Badinter, the author of “L’abolition” wrote in his book that being present at several public executions has turned him into a hardcore opponent of the death penalty. He went on to say that a period of time – “not shorter than 25 years” – should elapse before the so-called “Louisette” was seen in public again. In 2010, 33 years after its last use, a model of a guillotine designed by Léon Alphonse Berger in 1872 was on display at Musée d’Orsay in Paris at a show entitled Crime et Châtiment (Crime and Punishment). According to Badinter this is the last intact guillotine in mainland France. Only two others exist, both of which are from overseas and are housed in the National Prisons Museum in Fontainebleau. It is fair to say this deadly machine will not be missed but it does add an interesting element to France’s colourful history.