Home Compass What is it like to take a ‘Feel the Heat’ viewing experience... 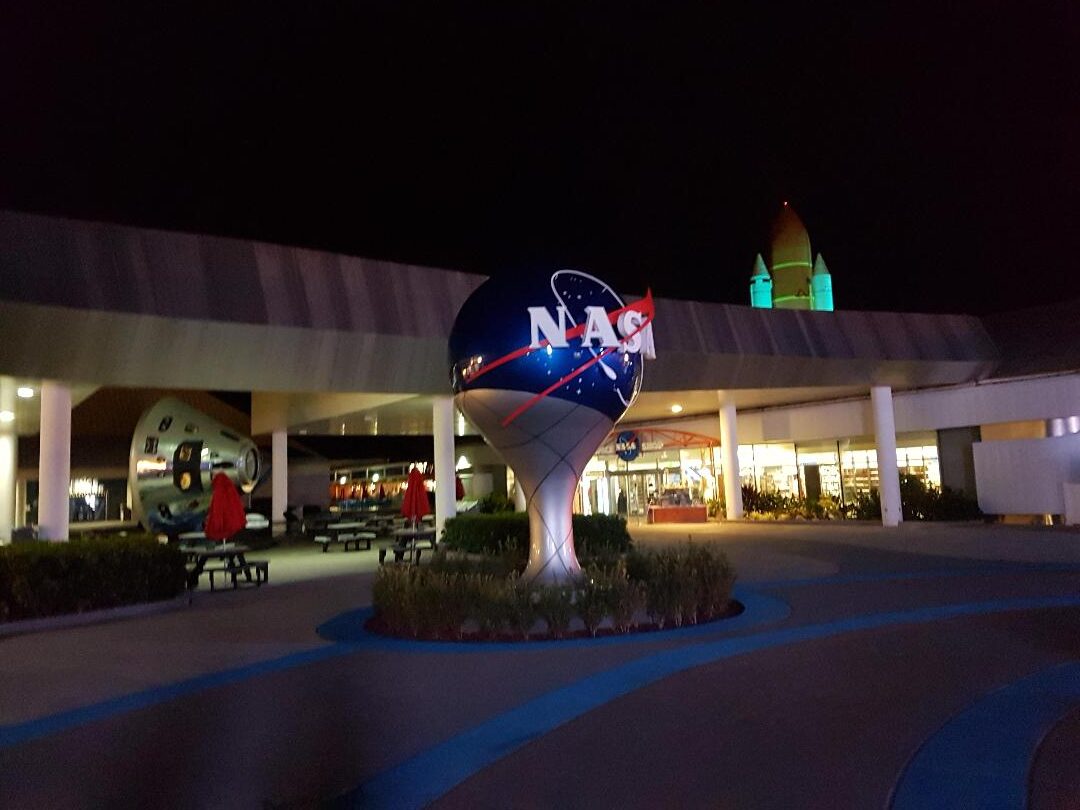 Kennedy Space Center is open all year round but for those lucky enough to be in Florida on launch days, you can purchase a ‘Feel the Heat’ Launch Viewing Package and get as close as any civilian possibly can when the rockets fire up.

Today, Rocket company SpaceX will make a second attempt to get Nasa astronauts Doug Hurley and Bob Behnken into orbit. Their flight to the International Space Station (ISS) on Wednesday was postponed because of poor weather at Florida’s Kennedy Space Center.

There’s huge focus on their mission because it will mark the first time that the United States has been able to launch its astronauts to the ISS since the retirement of Nasa’s space shuttles in 2011.

It will also be the first occasion that the US space agency has used a private company to transport one of its crews to orbit.

In December, we were fortunate to be in central Florida, a trip which coincided with the first test flight of the Boeing Starliner in the early hours of December 20th. Given this was billed as a historic launch, it seemed a good opportunity to visit Cape Kennedy and see the launch in person.

I initially thought of driving the car over and seeing the launch from a parking lot somewhere, but browsing the Kennedy Space Center website I was excited to see that they offered a ‘Feel the Heat’ package. I immediately booked two tickets at a cost of $208.65 each. This package included a 2-day admission ticket to the space centre, launch viewing from the Banana Creek Launch Viewing area, breakfast, a talk by a former launch director and astronaut, a chance to see a Mars rover and a souvenir coin. Expensive yes, but a once-in-a-lifetime experience for many, including myself.

But this comes with a big caveat, especially for out-of-state and international visitors. Your ticket is for the launch and the tickets you purchase are mission specific. So if your launch is scrubbed, as they frequently are, there is no refund but you will be re-admitted when the mission is next scheduled. Fine if it goes ahead the next day. Not so great if you are visiting from Texas and it is rescheduled for the following month.

With fingers crossed that our launch would go ahead, we set off at 1am for Kennedy Space Center. The instructions you get sent through when you purchase your ticket give quite detailed instructions and start time. It is quite clear; miss the arrival time and you will miss the transfer bus and so miss the launch. No exceptions. So we arrived an hour early. As did many others scared of spending hundreds of dollars and missing the bus. 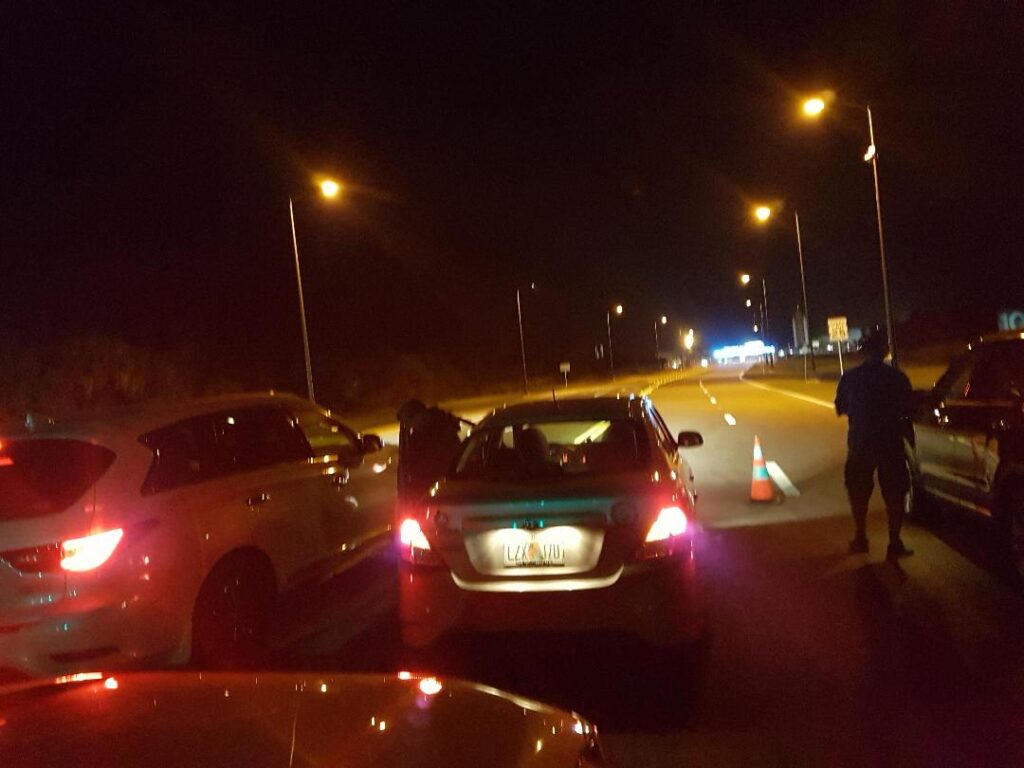 After twenty minutes queuing on the coned off entrance road, state troopers arrived and asked us to vacate the island and come back in an hour.

We stopped at the nearest gas station, got some strong coffee and counted down the minutes. This time, the road was open and we could drive straight in.

It’s hard not to feel nostalgic for the Apollo programmes and the brave men who drove down this very same road on their way to the moon, and that you are in a very special place on Earth as you see the launch pads looming on the horizon. 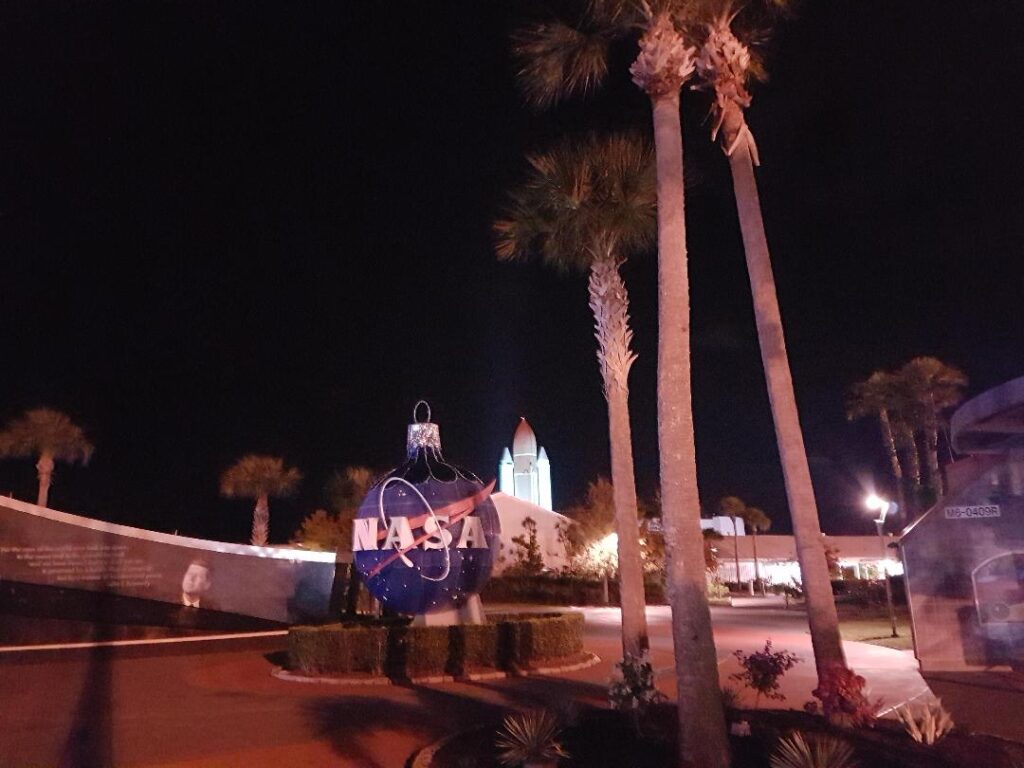 Walking into the Space Center past the famous rocket garden, you really get the sense that the eyes of the world are focused on this stretch of Florida’s east coast and that you will be witnessing history in the making. 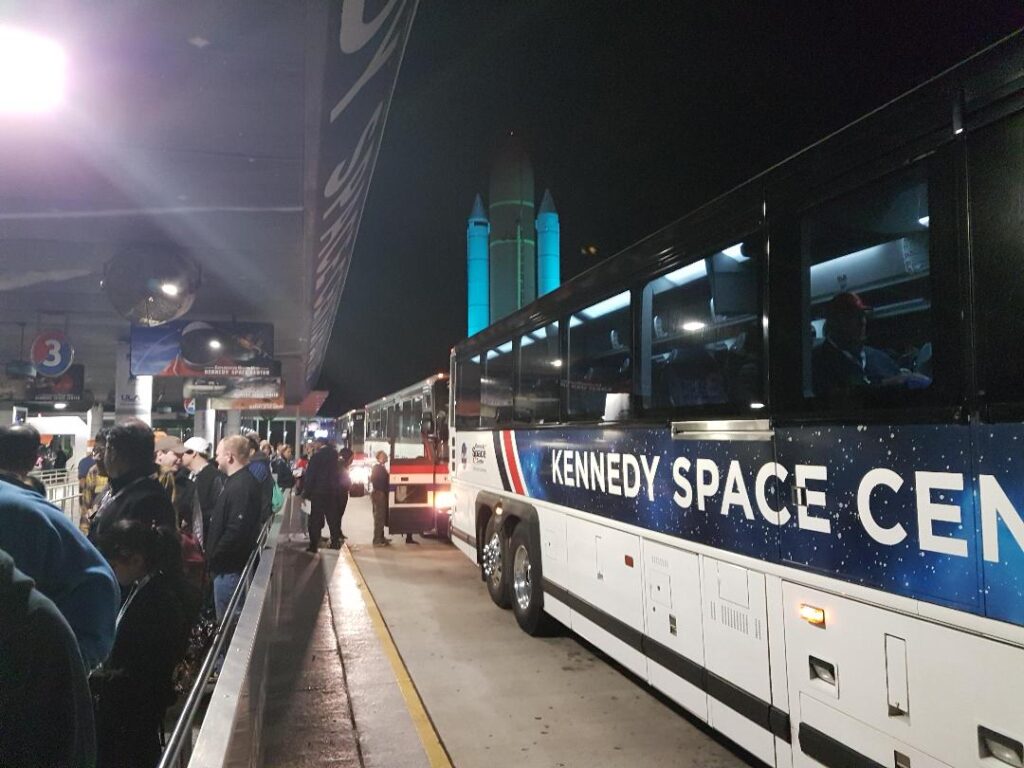 Security is tight, as would be expected, but you do get a lanyard, a commemorative coin/ medal souvenir, and a smile on passing through the control point. TSA this is not.

It was still dark in the early hours when we made the bus journey to the Banana Creek Launch Viewing Area, but light enough to make out some of the famous landmarks such as the massive Vehicle Assembly Building.

On arrival, we still had a couple of hours to go before launch. There was a few hundred other people and they all went into the adjacent Apollo Center for breakfast. We took a left into the ‘Firing Room’. 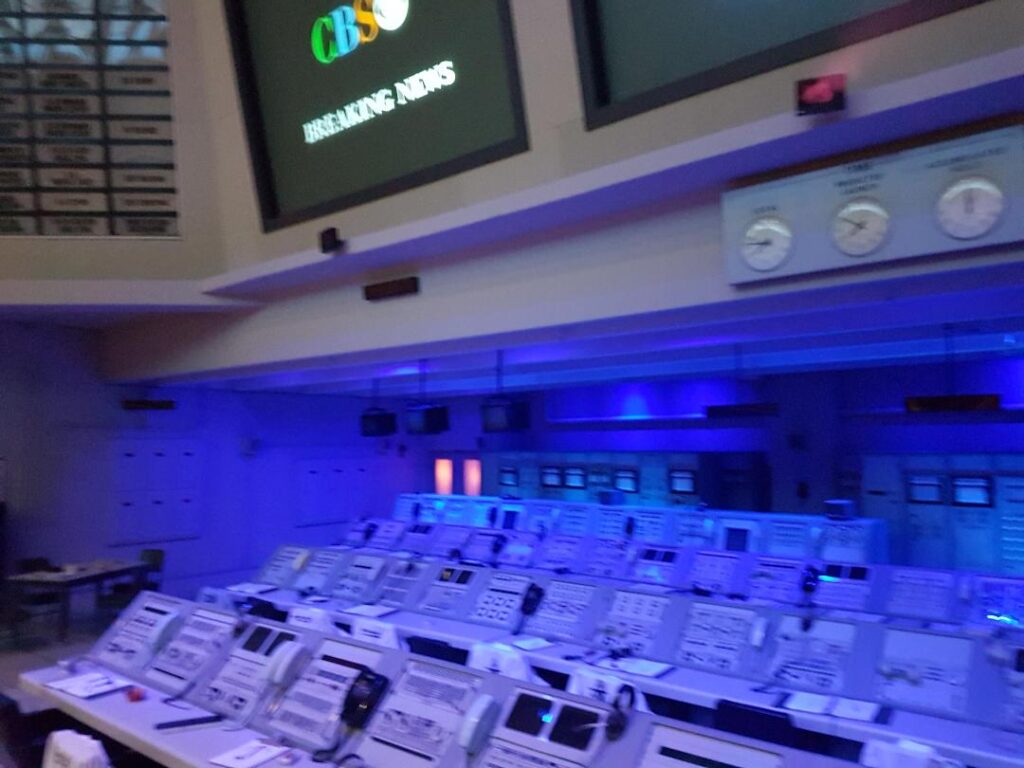 We were surprised to find ourselves the only people there apart from a charming young guide Chad who had an enthusiasm for the role that brought the whole experience to life. He left us to relive the launch of the first crewed NASA mission to orbit the Moon in 1968 aboard the massive Saturn V rocket in the Firing Room Theater, after which we joined our fellow visitors for breakfast. 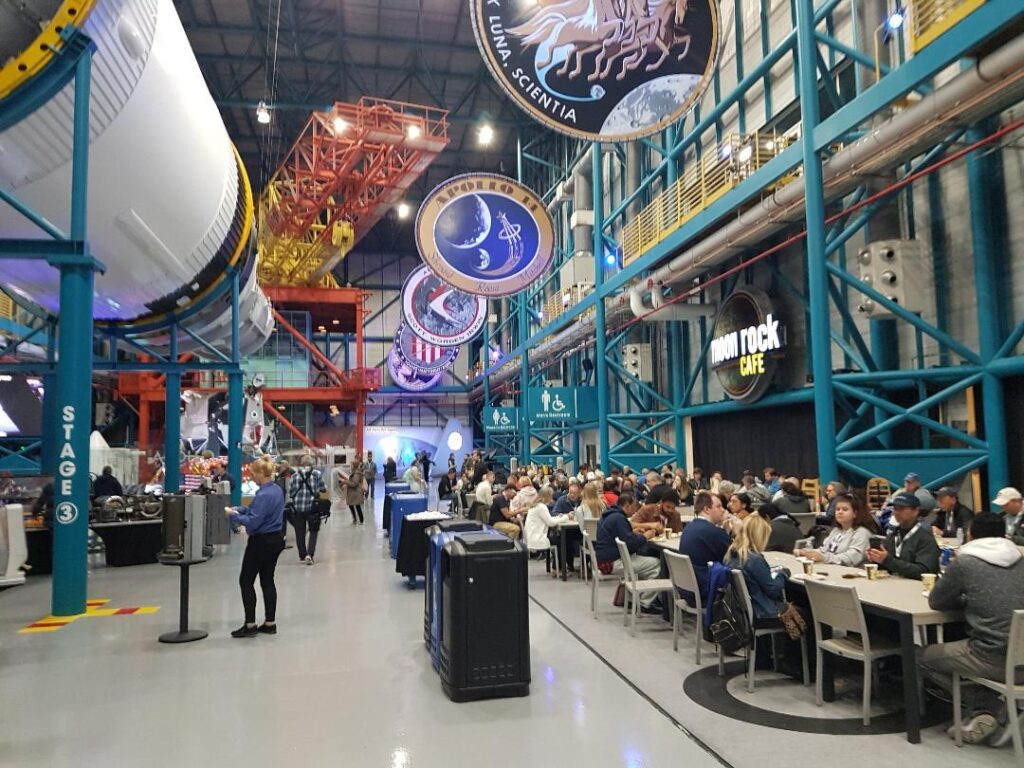 And what a setting for breakfast! You sit right underneath the Saturn V Rocket and are in awe of it’s massive size and power as you enjoy the buffet.

Then we headed outside for the main attraction – the launch. Two tips – firstly, do not sit on the first bleacher stand you come to. You will be able to hear the speakers and see the launch from any of the stands. Choose your neighbours carefully though. We had to move because of a young family with a crying baby and a screaming two year old. Try and head to where the amateur photographers are gathered. They will want silence and will not disturb your experience. Secondly, if you are there for a night launch, you will need a light jacket in winter. I was wearing just a short-sleeved shirt and I regretted it. 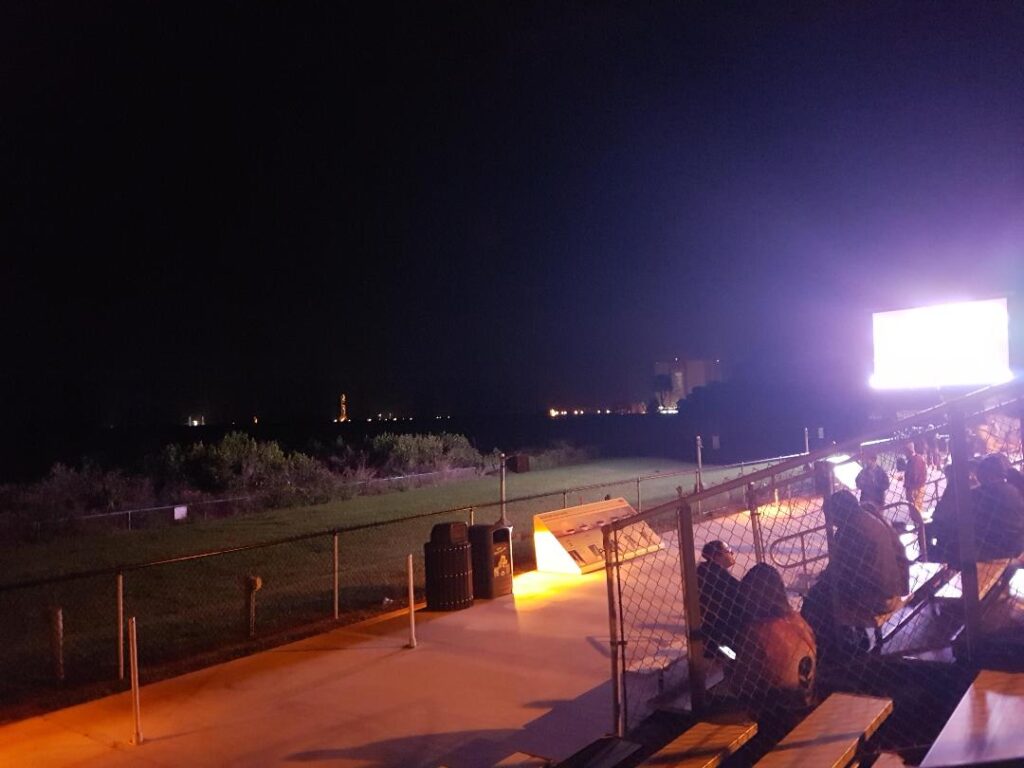 The build-up is great. The speaker will explain what each of the launch pads are and where to look when the launch happens. The big screens give countdowns and there is music being played through the speakers to keep you entertained. 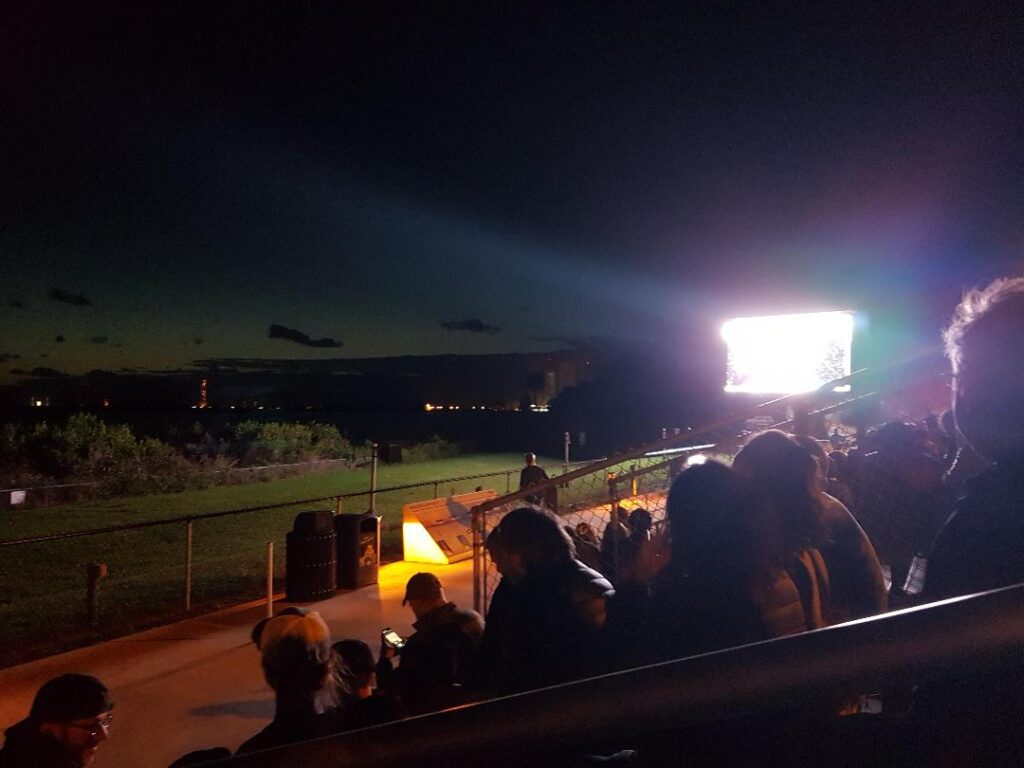 We were fortunate enough to see the International Space Center pass gracefully overhead just before launch, the rocket’s intended destination. Again, the speakers were fantastic at explaining where to look in the sky and managed to engage both hard-core space fans, and first time newbies.

The two hours wait time since breakfast had flown by and the clock now had just two minutes to go.

The danger that the mission might be scrubbed due to high winds seemed to be over and the speakers confirmed we were set for launch.

In unison everyone chanted ‘Ten, nine, eight…’ A bright orange flame lit on the horizon and slowly began to rise. ‘Go Starliner’. After roughly ten seconds you hear a growing wave of noise washing over Banana Creek as the rocket ascends ever higher.

The speakers give useful information as the rocket rises, including where the rocket currently is in relation to US cities. Whilst the rocket is of course travelling upwards, at ground level it appears as though it has flown in a giant arc thanks to the curvature of the Earth.

Sadly, the mission was not entirely a success for the Starliner and it failed to meet up with the ISS due to a navigation and resultant fuel issue.

“We’re talking about human spaceflight,” Nasa Administrator Jim Bridenstine cautioned. “It’s not for the faint of heart. It never has been, and it’s never going to be.”

And whilst this particular mission might not have met all its objectives, it certainly met mine, and if you are in Florida on a launch date, I can but only recommend you experience the wonder of space exploration for yourself . 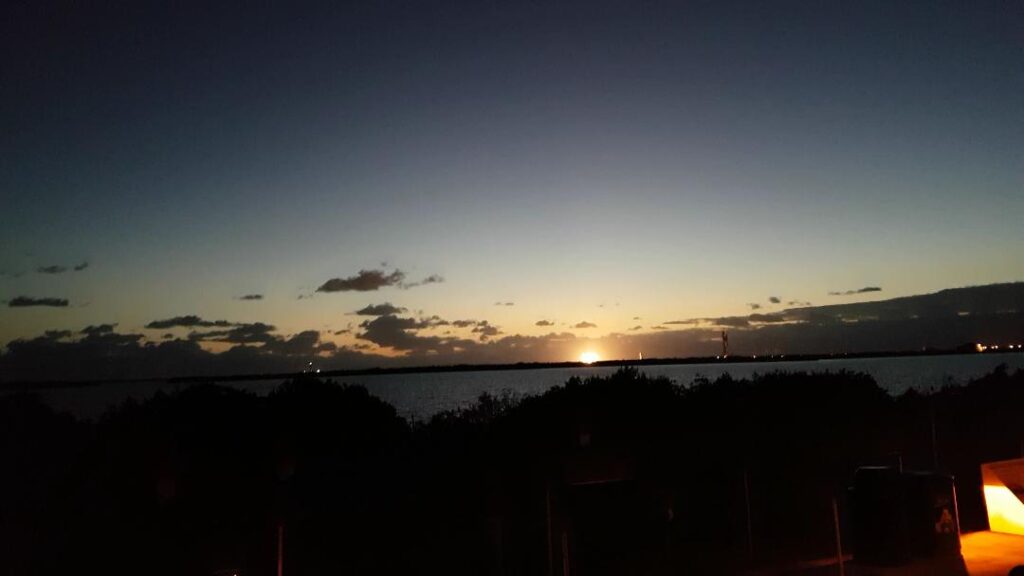 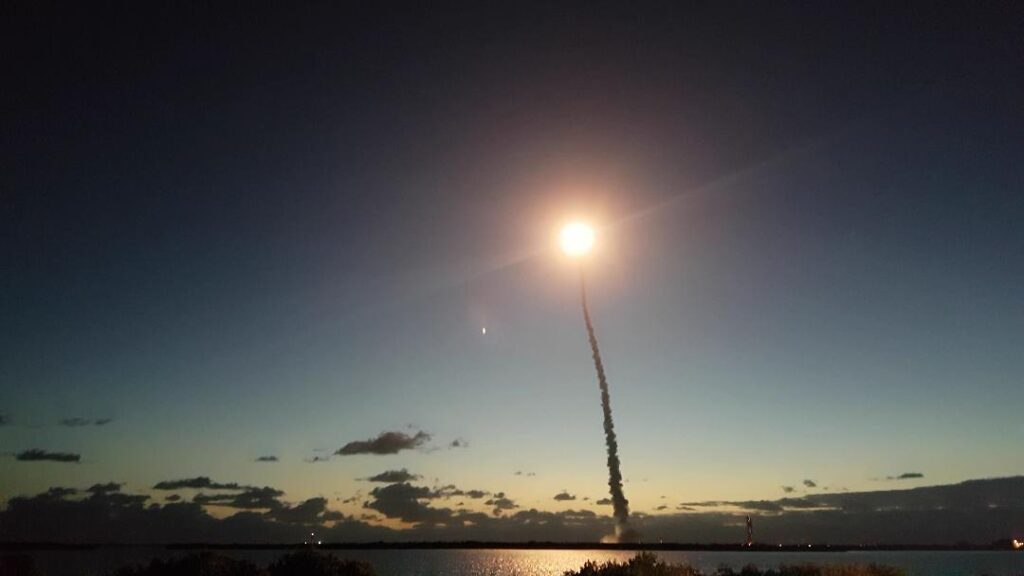 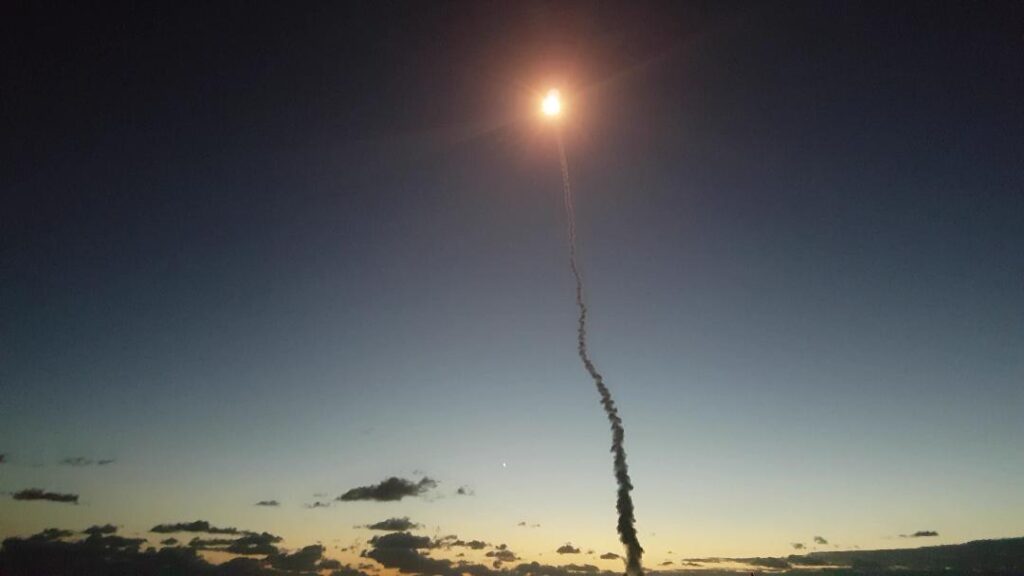 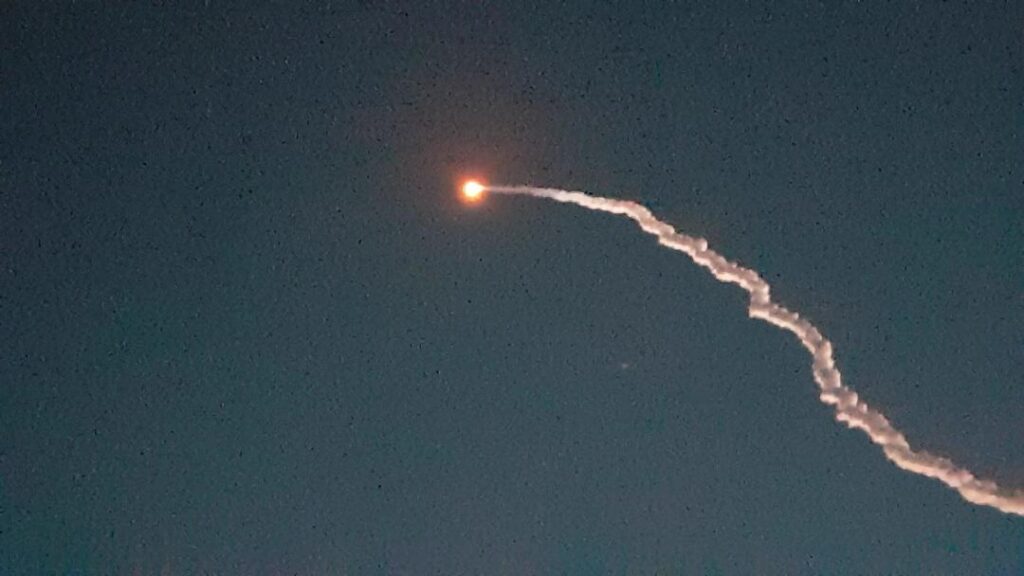 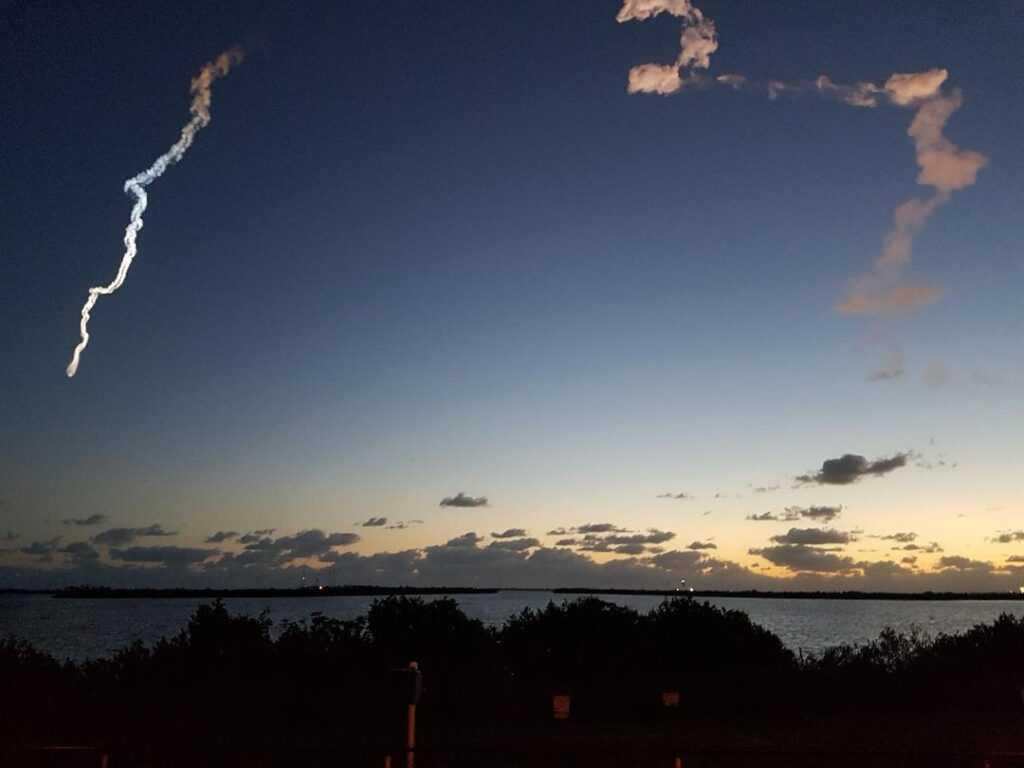