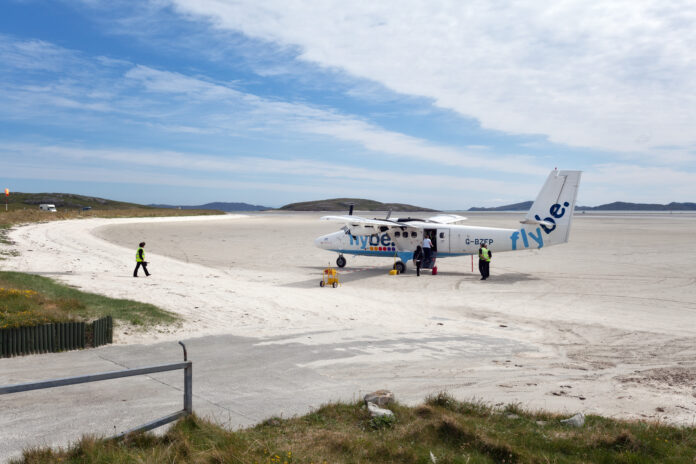 The Isle of Barra holds many fascinating sights for a tourist. Even your arrival by plane will be an experience – it is the only pace in the world where scheduled commercial flights land on a beach!

Just off the mainland of North Western Scotland is the wonderful Outer Hebrides which is full of history, idyllic views, and tranquillity in many different areas. One of the islands in the Outer Hebrides is the Isle of Barra which is an incredibly interesting part of the area and one that you should visit if you get the opportunity. So, what makes the island named after Saint Finbarr of Cork so interesting?

The Isle of Barra has a population of 1, 174 people. In the famous BBC TV series Dad’s Army, Private Frazer claims to be from Barra and calls it a “wild and lonely place”, with a population like this he might be right!

On the island over 60% of the population speaks Gaelic. Considering Gaelic is considered an endangered language, this is a very impressive that a small densely populated area such as Barra has so many people still speaking the native tongue of Scotland.

The island lies as the second southernmost island in the Outer-Hebrides and is connected to the southernmost Vatersay but a small causeway where only one car fit through at a time. When crossing the causeway, you are told to go slow and you will want to as you admire the rolling hills, magnificent rocks and all the different types of boats on the water. From fishing boats to cruise boats, it really is a fantastic fight. 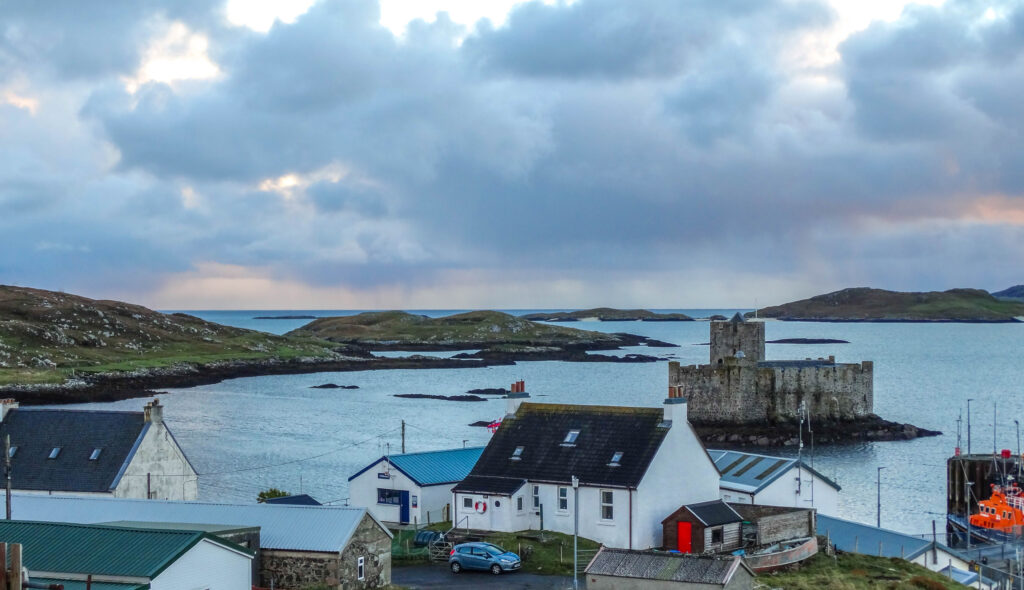 After the roads were being constructed in the 1990s, they discovered pottery work in the ground. These pottery pieces, after being examined, were found to be from around 2500 BC! That means that there has been human civilisation on the island neolithic era.

After storms hit the island in 2007, many other amazing historical items were unearthed and it discovered remains from the Bronze age and the Iron age. Brochs have been found on the east side of Barra and in Allasdale there were even roundhouses found near the dunes.

Occupation continued in the 3rd century and into the 8th century. However, during the 9th century Vikings arrived on the island and this is where dispute comes to the name. Many believe the “Barr” part is named after the Saint Finabrr of Cork but others believe that the Vikings named it so because the Old Norse elements berr or barr meaning “bare” or “rough”, represents the island. According the Grettis saga, the first Viking to arrive was named Omund the Wooden-Leg. Yes, he did only have one leg.

How to get to the island?

There are three main routes to get to the Isle of Barra. You can either travel by car via Oban or via Eriskay’s ferry routes. However, you can fly to the island from Glasgow or Benbecula and this is possibly the best way to travel to the island.

The travel to the island is often described as the best part of Barra, however, that is not to say you will not enjoy your time on the beautiful, rugged island. There are stunning views of the islands on all options but if you travel from Oban you may even see some whales or dolphins.

If you fly into Barra, you will not be landing where you think you are landing. The airport does not have the traditional tarmac but it is in fact a 2 mile long cockle shell beach. However, the plane can only land on the island when the tide is low so the timetable can vary but in 2019 it showed that for the whole of the summer period there were flights every single day! 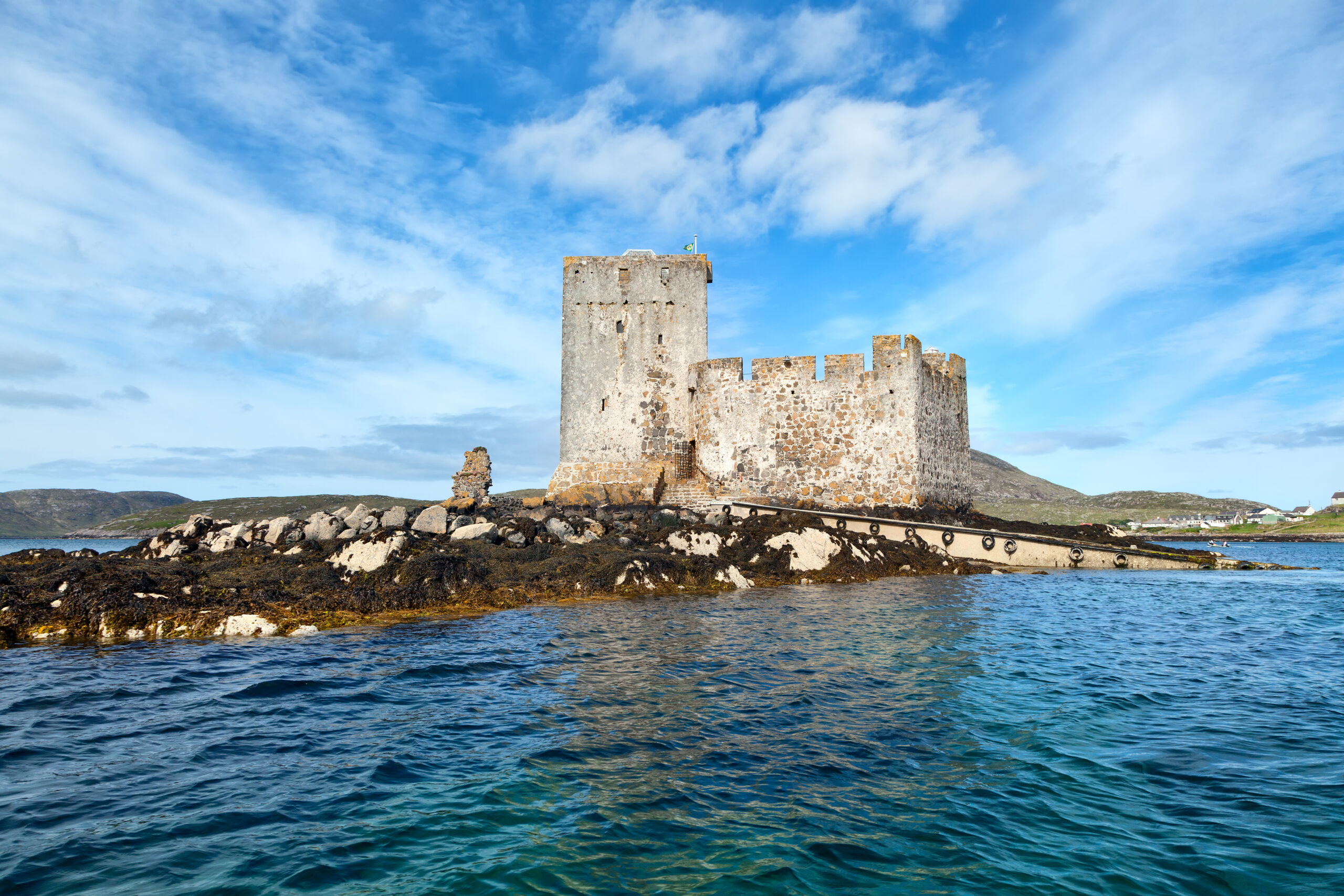 What is there to see and do?

As stated the island is full of history dating all the way back to 2500 BC so there is plenty of history to discover because after the Vikings were done it fell into different Lordships, Lairds and even Pirate control. With the rich clan history, the island of Barra of very proud people who like to show off their local produce which they have been able to produce for centuries. Items such as fish, meats, jams, chutneys, eggs and home baked goods are all very popular in Barra.

There are amazing views no matter where you look on the island but you must visit Kisimul Castle which is perched in the middle of the bay and dates back to the 15th century. You must also Heaval which is a white marble statue of the Madonna and Child, called “Our Lady of the Sea”. It was erected in 1954.

One the best things to try in Barra is the fish curry at Cafe Kisimul. The fish is so fresh because it is caught locally and used by the restaurants on the island. The taste is exquisite and you can taste the freshness with every bite. So, when visiting make sure you experience the cod, monkfish and tuna masala.

For the more physically adventurous traveller there you could go sea kayaking or power kitting, which at times can be cold but is also exhilarating as you take in the beautiful surround areas. The island also hosts a half marathon event Barrathon (brilliant!), which is part of the Western Isles Half Marathon series. But if a half marathon is a bit too much for you, then Barra also plays host to the annual hill running competition where participants run up Heaval (383 m) before returning to Castlebay Square. The record is 26.25 minutes.

The island is absolutely stunning and exotic. The island actually has all types of weather, not just the predicted rain that many people associate with Scotland and the islands. It actually has its own microclimate which leads to the nickname Barra-bados (also brilliant!).

So, what are you waiting for? Look up those flight times!