Home Over The Hump Featured – Brosnaichte What to feed swans? 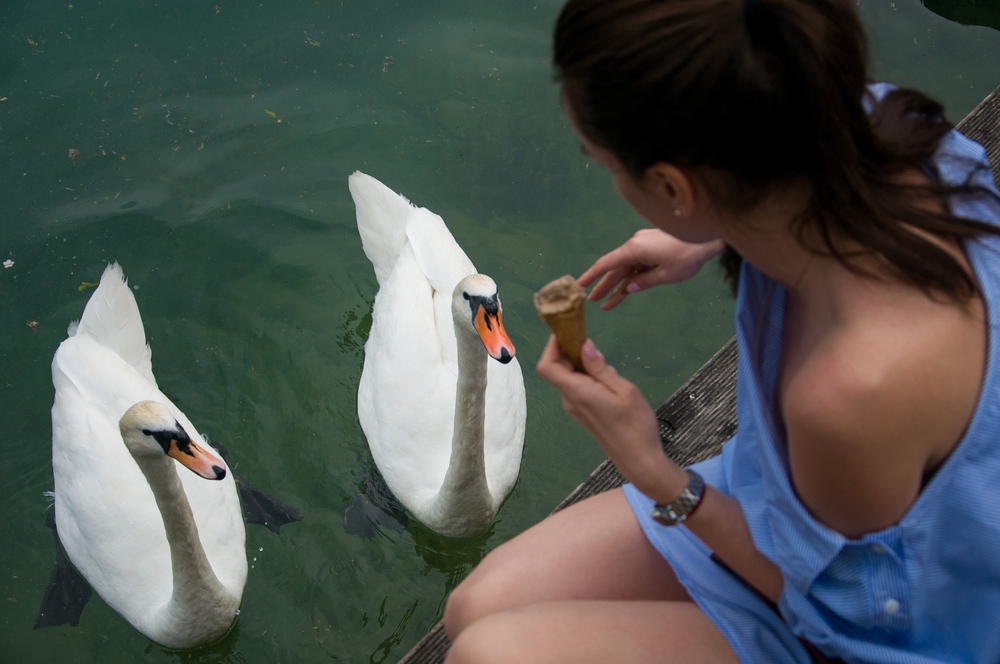 Now more than ever, our swans and water birds need you. Sadly with many places instigating a ‘no feed bread’ policy, with no grass to graze on and little natural water vegetation, it means that many swans have gone hungry this summer.

Legend has is that, when it is about to die, a swan will raise its elegant, snow-white neck towards the skies and sing the most ethereal melody of death.

The death of a swan is probably the last thing you want to cause through ignorance – but can feeding bread to swans really kill them?

For centuries, families and visitors to public ponds and lakes across the globe have enjoyed learning about wildlife while feeding water-based fowl with scraps from home, as well as the packets of seeds they have bought on site. 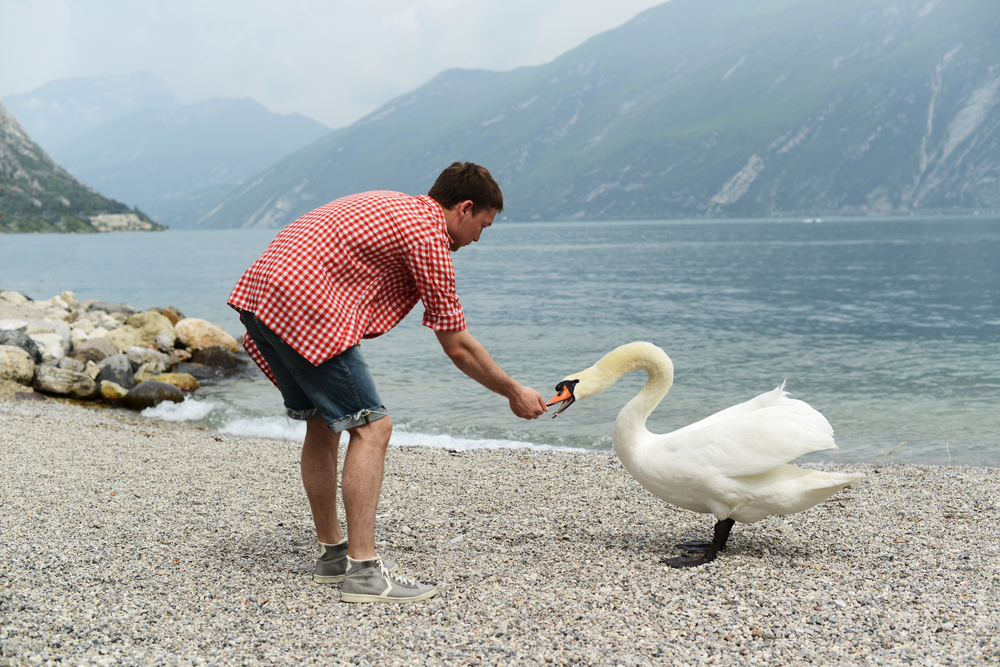 Can you feed swans bread?

Many of us remember visiting the local park with our parents or grandparents clutching a bag unwanted stale bread from the cupboards at home or a cheap loaf from the local shop.

In recent years however, some parks or managed areas of wildlife, have erected signs to ask politely that visitors refrain from feeding bread to swans.

But is bread truly bad for swans and other water-dwelling fowl?

According to the Healthy Wildlife, Healthy Lives health project based in Perth’s Eastern Region, Australia, “feeding non-natural sources of food to waterfowl can lead to nutritional imbalances, increase the risk of disease and lead to altered animal behaviour”.

The project’s website urges us to remember that even small amounts of ‘human food’ can be damaging to birds because they are much smaller. It warns for example, that feeding just one slice of bread to a Black Swan is the equivalent of feeding junk food to a human (two slices of pizza).

However, other experts agree that, while bread can be fed to swans, it is certainly not the most nutritious item on the menu. It would seem that, just as in the human population, the healthiest swans are those that benefit from a mixed and varied diet.

The Royal Society for the Prevention of Cruelty to Animals (R.S.P.C.A), a charity which works to protect all creatures across the UK said:

“It is always nice to hear that people want to help swans, ducks and geese; however, it is important to make sure they are given the right food. Bread is not the best food to give waterfowl, as it fills them up without giving them the nutrients they need.”

The charity adds: “We recommend people instead give small amounts of grain such as wheat, corn or bird seed plus freshly chopped greens like cabbage or spinach, as these will supplement the birds’ natural diet and help provide them with the necessary nutrients to keep them healthy.”

Similar advice is given by the multi-award winning, The Swan Society in Middlesex, England, a holder of the Queen’s Award for Voluntary Service.  In response to a question asking if bread is bad for swans, its website advises: “The simple answer is no, mouldy bread should never be fed, and bread should not be the only diet of a swan, but bread is not dangerous to swans. There has been much talk recently about banning the feeding of bread to swans, but no scientific studies have been made to back up the reasoning behind this.”

The sanctuary also provides a link to a scientific study of the effects of diet on two groups of Mute swans – urban swans whose diet included bread and rural swans who fed on more natural ingredients. The 1983-4 study found that there was little significant difference between the fat reserves found in both.

However, the report’s author, Jane Sears warned that urban swans’ muscles reserves “may have been depleted as a result of a lack of protein in a diet comprised substantially of bread.”  She added that there had been further evidence suggesting that swans feeding largely on bread are able to “establish sufficiently large protein reserves to be able to lay relatively large clutches” of eggs.  Sears added other problems associated with Mute swans who feed mainly on bread, are those associated with becoming too familiar with humans and the increased risk of physical danger that it may bring. 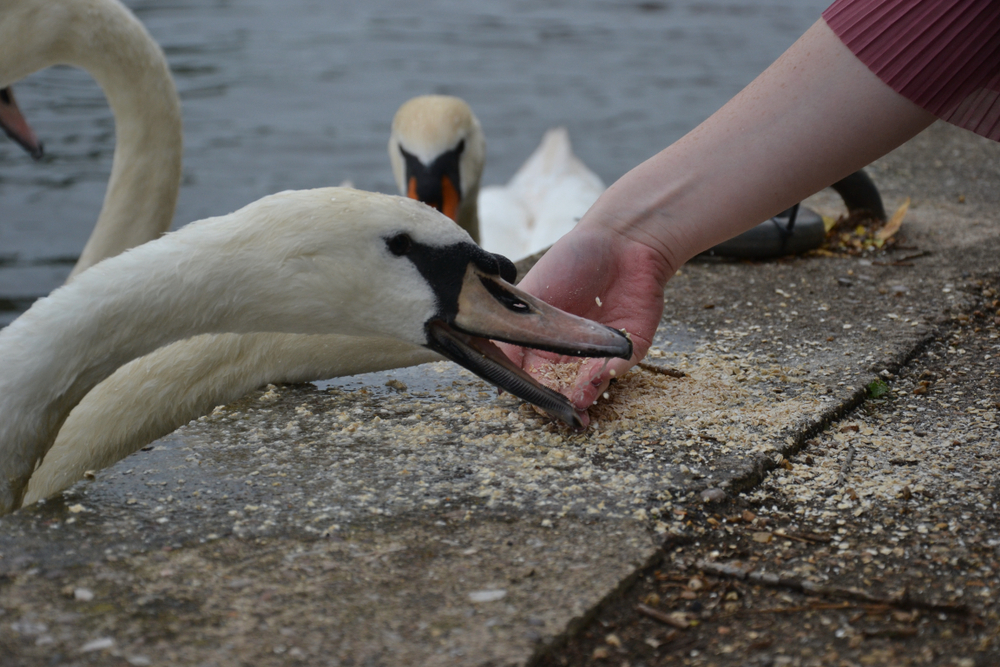 Throw the food into the water

In addition, The Swan Sanctuary insists that bread fed to swans must be fresh.: “If you want to feed swans then give them fresh bread (mould is poisonous to them), grain such as wheat or corn, and fresh greens such as lettuce or spinach.”

It encourages wildlife lovers to throw food onto the pond or lake so the swans can swallow water with their food. It warns that feeding swans on solid ground is “environmentally unsound” because it may encourage the wildlife to become too familiar with humans, leading them to “leave the water whenever they see people which can bring them into harm from cars, dogs etc.” The site also advises that swans do overeat inherently and therefore cannot be overfed.

However, some organisations positively encourage the feeding of bread to swans.

For example, the ‘London Boaters’ website pleads with locals and visitors to continue to feed bread to swans, adding that a ‘no bread policy’ instigated by many parks has left wild swans going hungry due to a lack of grass and natural water vegetation. They encourage visitors to offer swans a wide variety of unwanted home foods, such as soft green salad leaves, some cereal flakes, wheat and sweetcorn for example.

The Boaters also publish, on their site, a message from The Queen’s Swan Marker, David Barber, MVO  which ends: “I therefore encourage members of the public to continue feeding swans to help improve their chances of survival, especially through the winter.”

According to natureinflight.com, swans usually eat on the water and are “primarily herbivores” who will feed on “all manner of aquatic vegetation” referring to algae, pondweed, waterweed, musk grass, wild celery and wild rice in addition to smaller creatures such as worms, small insects, molluscs, fish and even frogs.