Home Compass Why coasteering may be falling off a cliff but its popularity definitely... 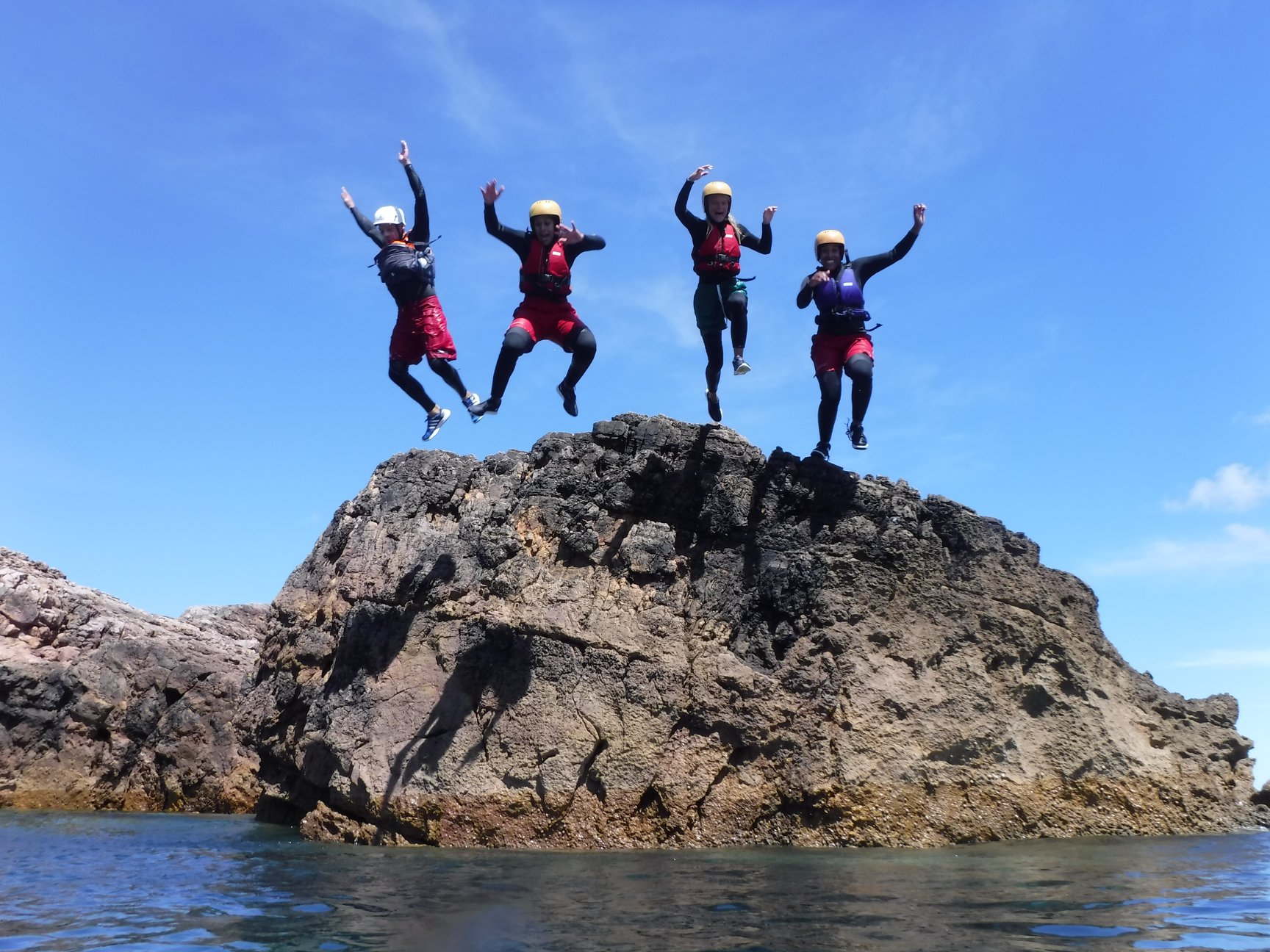 What is it like to jump off a cliff into the sea? Quite fun actually! This new adventure sport which combines elements of rock climbing, wild swimming and cliff jumping is starting to make waves around the world.

On a particularly moody Sunday morning in February 2014, my friend Nick and I drove down to a small village in North Cornwall for our first ever official training session as coasteering guides. We’d explored our local coastline in the past through surfing, kayaking, fishing and sea cliff climbing, but nothing could have prepared us for what we were about to experience. We’d been invited along by Keith Putman who had recently coached us through some kayak and canoeing qualifications. He’s also the founder of Go Coasteering and author of the book South West Coasteering Guide. Along with other guides, he has forged some of Cornwall, Devon and Dorset’s most popular and scenic coasteering routes.

Meeting in a grey and puddled pub car park, it seemed that we were the only people up and about; everyone else, it seemed, had the sense to stay in the warmth and comfort of their homes. We changed into our wetsuits and donned buoyancy aids and helmets before making our way on foot towards to coast. From the headland, we could see huge waves agitated by a brisk cross-shore breeze rolling towards the cliffs before crashing on the rocks below. Sheepishly, we followed the rest of the group who, unfazed and somewhat excited by the sound of the swell detonating against the cliffs, led the way down towards the beach where we would enter the water. In the hours that followed, we traversed our way around and craggy headlands and explored isolated coves, navigated our way through caves and tunnels neck-deep in water, practised rescuing one another from the ocean and jumped from sheer knife-edge outcrops into the sea.

I’ve been hooked on coasteering ever since, so much so that it’s been a driving force behind the places I’ve chosen to live and the trajectory of my career. For most people, weekends and days off were made for mowing the lawn, washing the car or watching the match. But for me, there’s no greater pleasure than squeezing into a damp wetsuit, leaping into the sea and getting tossed about by the waves.

Essentially, coasteering is a hybrid sport combining elements of rock climbing, wild swimming and cliff jumping that takes place along the shoreline or what is occasionally referred to as the inter-tidal zone. The term was first coined in the 1973 guidebook Sea Cliff Climbing in Britain by John Cleare and Robin Collumb. Their initial use of the word ‘coasteering’ was in reference to the journey undertaken to access remote sea cliffs in order the climb them, although they did hint towards coasteering becoming a popular sport within its own right in the future. Whilst the terminology has only existed for the last forty years or so, coasteering has been taking place for as long as humans have been foraging and fishing along their local shores. 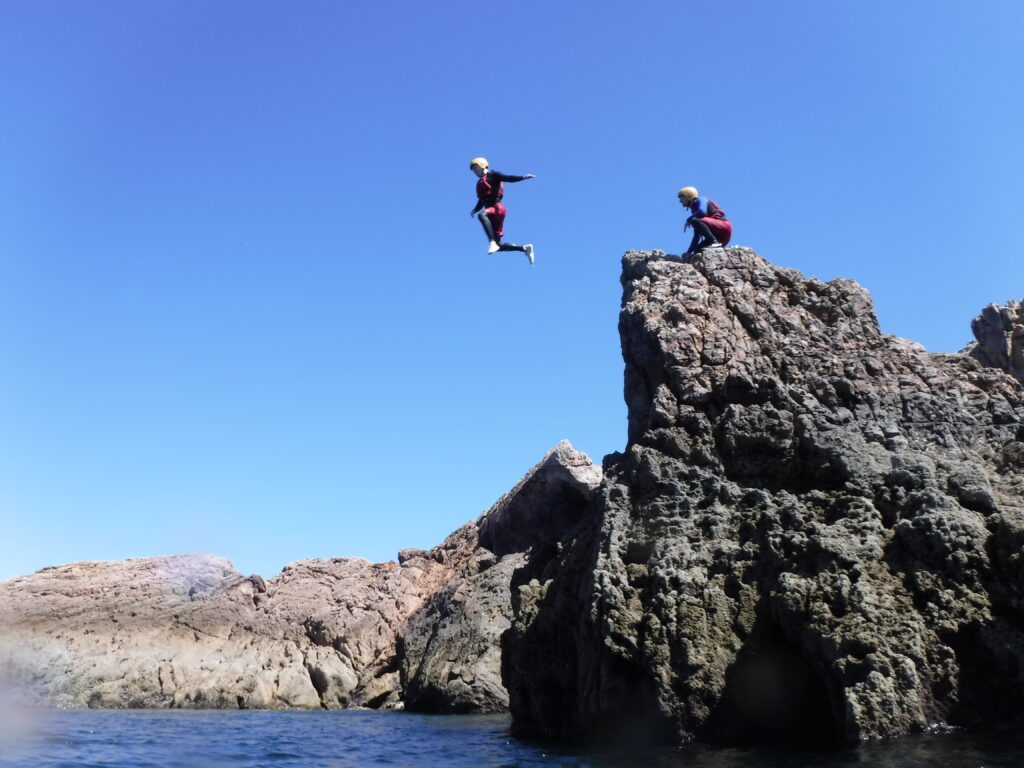 In the last thirty or so years, coasteering has provided a budding market for adventure activity providers across the globe. The growing success of coasteering as a commercial activity can be directly attributed to Andy Middleton who pioneered the first guided coasteering routes in Pembrokeshire with his company TYF Adventure. By utilising his understanding of rock climbing and surfing techniques as well as his own knowledge of the local coastline, he laid the sport’s foundations and set the benchmark for every coasteering tour operator in existence today. Since TYF’s foundation in 1986, the sport has developed and coasteering companies are operating not only in the British Isles, but also in Europe, Asia, Australia and New Zealand.

To a complete beginner, coasteering might seem like a dangerous way to spend the day but, as with all extreme sports, the potential hazards are calculated and controlled by the guides. Participants are required to wear wetsuits (continually dipping in and out of the ocean, even in the summer, can really take its toll on your body), helmets, buoyancy aids, strong shoes or boots to protect your feet when scrambling along barnacled rocks and gloves to keep your hands warm and safe. You’ll also see coasteering groups wearing long shorts on top of their wetsuits. This isn’t a choice inspired by fashion; the shorts are a great way to protect wetsuits from suffering rips or tears against sharper rocks. 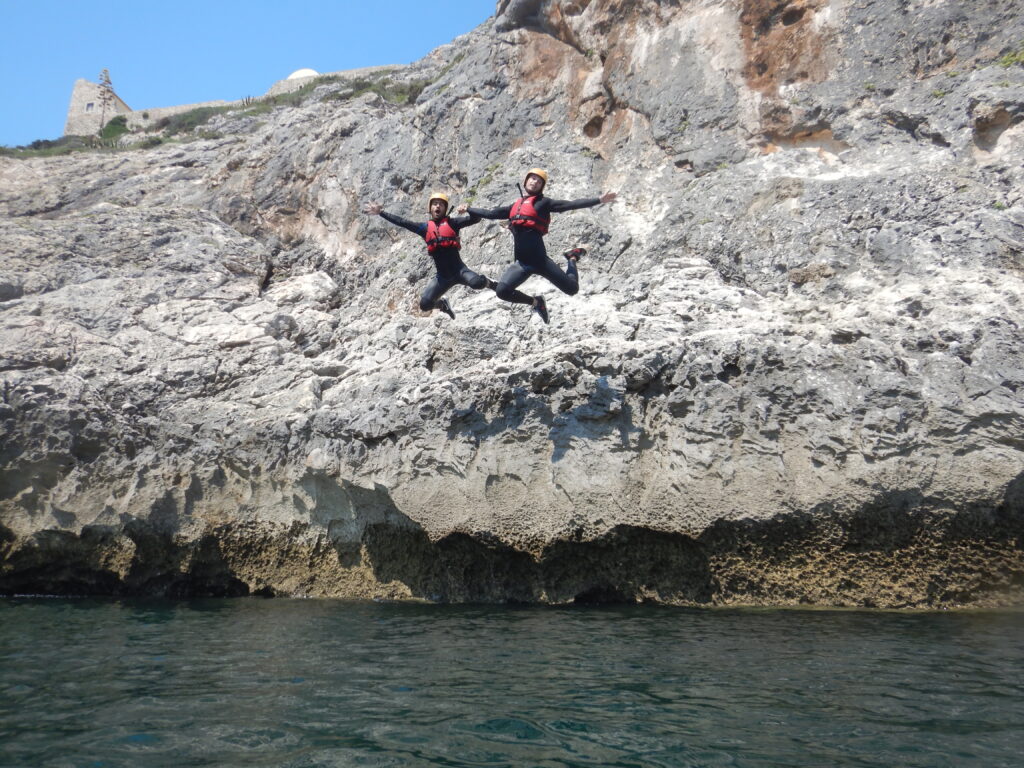 Coasteering guides will typically carry extra safety equipment to aid them and their group in the ocean. A throw line (a 15m rope that fits compactly into a bag to be thrown) comes in incredibly useful in assisting people in and out of the water when the rocks are steep or the swell makes for a tricky exit. Shorter lengths of rope, chord and dyneema slings are great for creating makeshift hand or footholds to make climbing slightly easier. Albeit seldom used, it’s also crucial for guides to carry a water-tight dry bag containing a first aid kit, a knife, a whistle and a phone in a separate dry bag in case of an emergency.

By and large, the sea conditions are going to dictate whether or not you can go coasteering on any given day. Whilst a small swell can keep you on your toes and add a bit of spice to your adventure, big powerful waves can prove to be a serious hindrance. Knowing the characteristics of a route and how certain sections of coastline behave and react to different swells and tides will allow coasteering guides to give the green light for a tour to go ahead. Similarly, using forecasting tools allows guides to predict how the ocean will change throughout the day and help to plan their sessions accordingly. 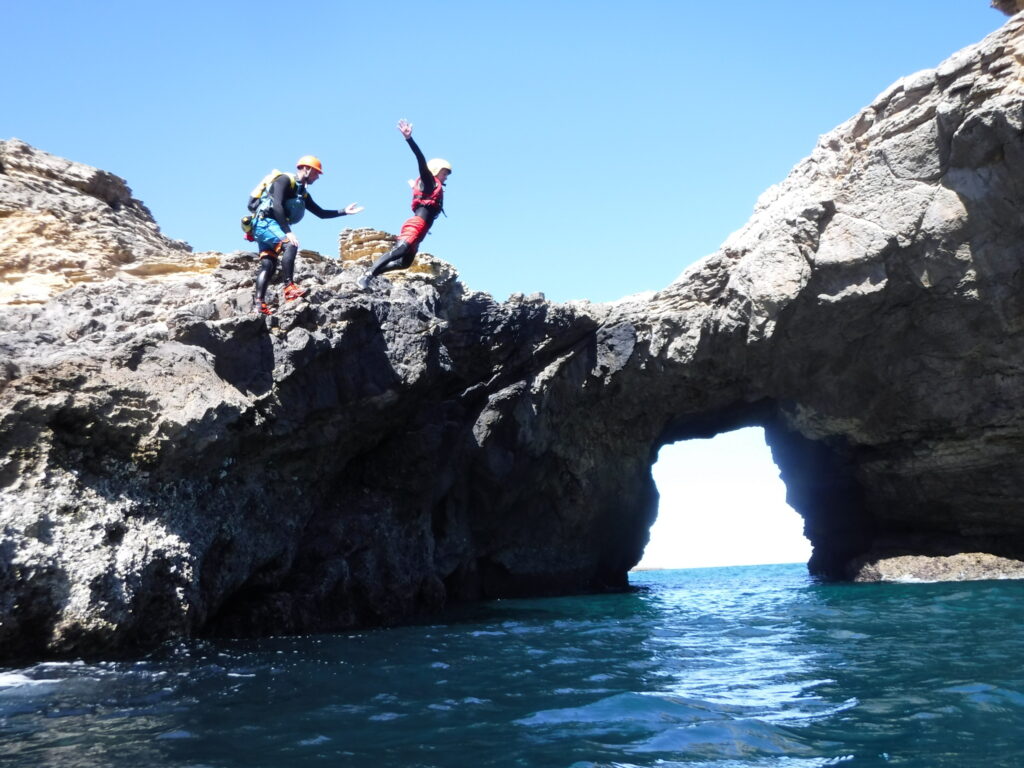 You’d be wrong in thinking coasteering is a sport exclusively for hardened adrenaline junkies. Thanks to its adaptability, coasteering is accessible for school children, families, individuals and other groups of any age providing they have a decent level of fitness and an appetite for adventure. The difficulty level of routes can be tailored to suit the ability of the clients and most of the time, easier options and short-cuts are available. More recently, coasteering has become a popular activity choice for corporate team building as well as stag and hen groups allowing parties to conquer the coastline as well as their fears.

When compared to other sports, coasteering is still in its infancy and is continually evolving and branching out into different spheres. It can be an incredibly practical educational tool and is being used by numerous outdoor education centres as a means of accessing some of nature’s most diverse and stunning ecosystems. Through coasteering, we’re able to study nature interactively and up close without damaging it. Some providers have developed their coasteering routes by incorporating roped activities such as abseils, zip lines and swings into their sessions. Similarly, there’s been an increase in the amount of companies using boats to gain access to some of the most rugged stretches of coast and isolated islands.

The rising popularity of adventure racing has allowed coasteering to move into the realm of endurance sports with a number of long distance events taking place annually such as the ‘Man vs Coast’ challenge – a twenty-mile race with coasteering obstacles thrown into the balance. With the ever increasing popularity of coasteering, this is perhaps the most natural and sustainable future for the sport. 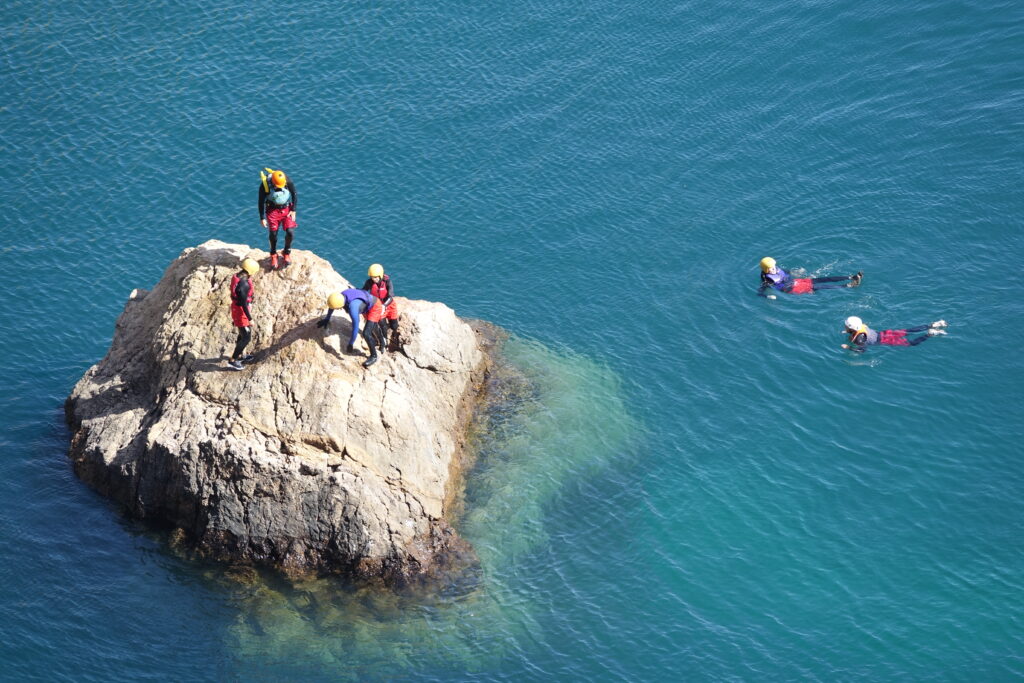 From its humble beginnings in South Wales, coasteering has grown and spread across the British Isles. The diversity of rock types and sheer length of the coastline makes the UK the sport’s home nation however, there are now a number of places competing to be top of the list as the world’s best coasteering destination. Every new place where coasteering takes place has something fresh to offer whether it be warmer weather and water, unique rock formations or beautiful scenery.

We opened our company, Poseidon Adventure in 2018 in Sagres in the Algarve and we definitely regard the area to be as good as anywhere else we’ve been coasteering. Situated at the most south-western point of mainland Europe, Sagres is home to incredibly dramatic scenery earning in the moniker ‘The End of the World’. It’s towering limestone cliffs, sandy coves and hidden caves make it the perfect spot to get a taste of coasteering in warmer climes. Since opening the business, we’ve been lucky enough to share our passion for coasteering with guests of all ages (our oldest being 73) from all over the world.

If you’re looking for a new hobby, something to do with your family and friends or just a one-off adrenaline fix, coasteering could be the best way to test your mettle against the natural power of the ocean. Getting up close and personal with Mother Nature has never been easier and there’s really no greater thrill than free climbing above the sea or the sensation of flying through the air before landing amongst the waves. Coasteering is unique in its nature, there aren’t many sports that are so thrilling yet so accessible, so what are you waiting for? Get out there and try it for yourself!